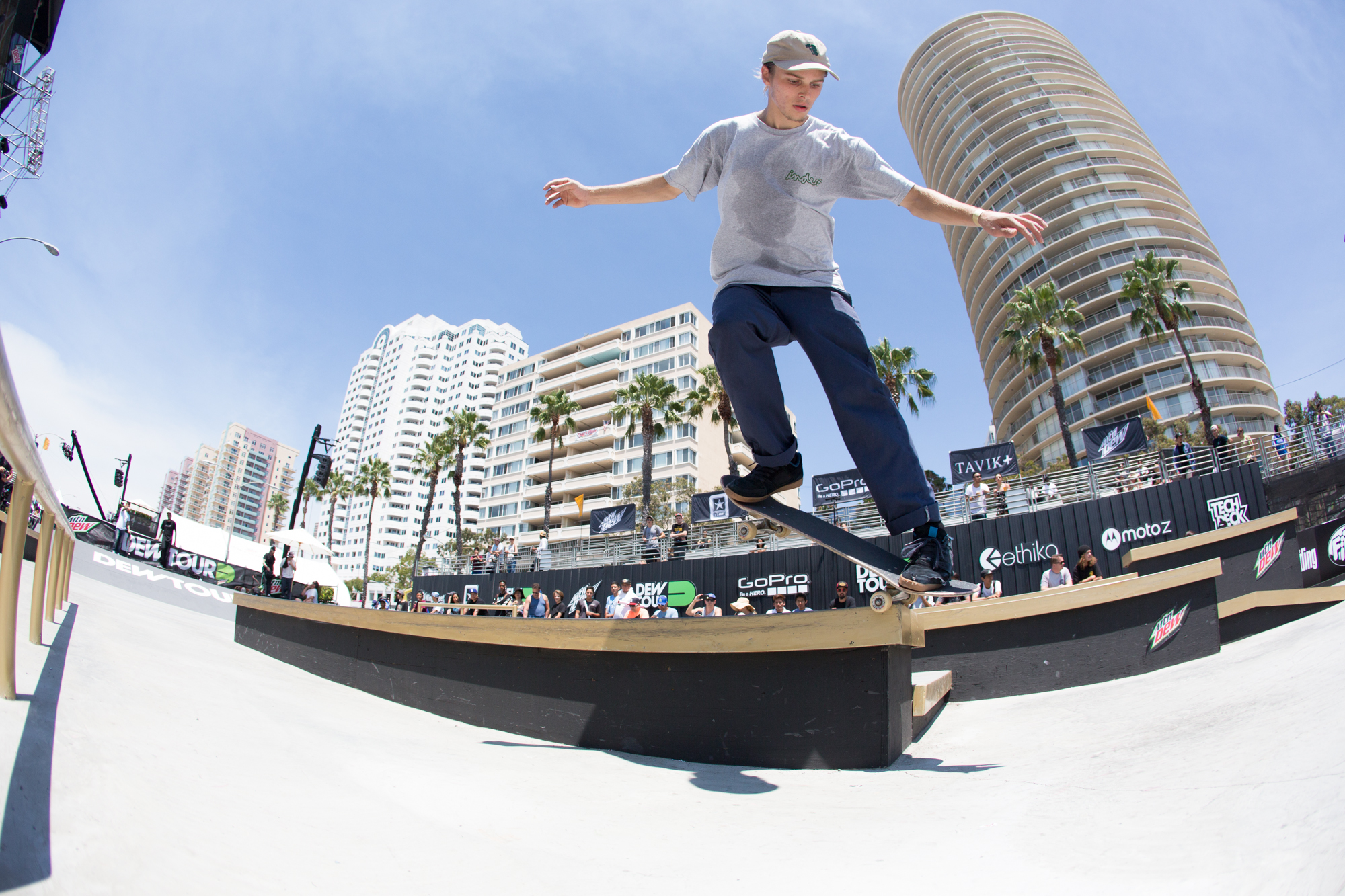 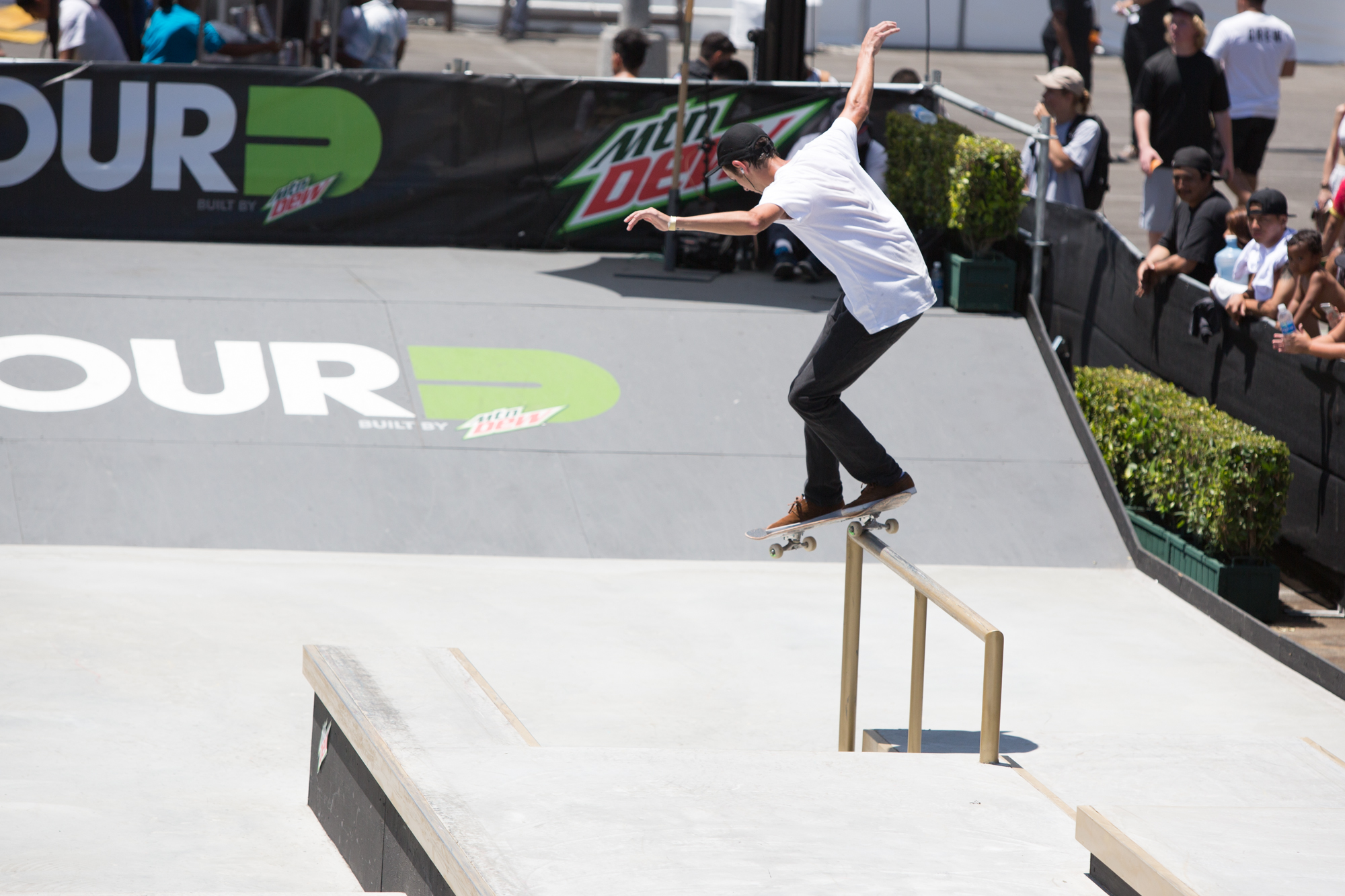 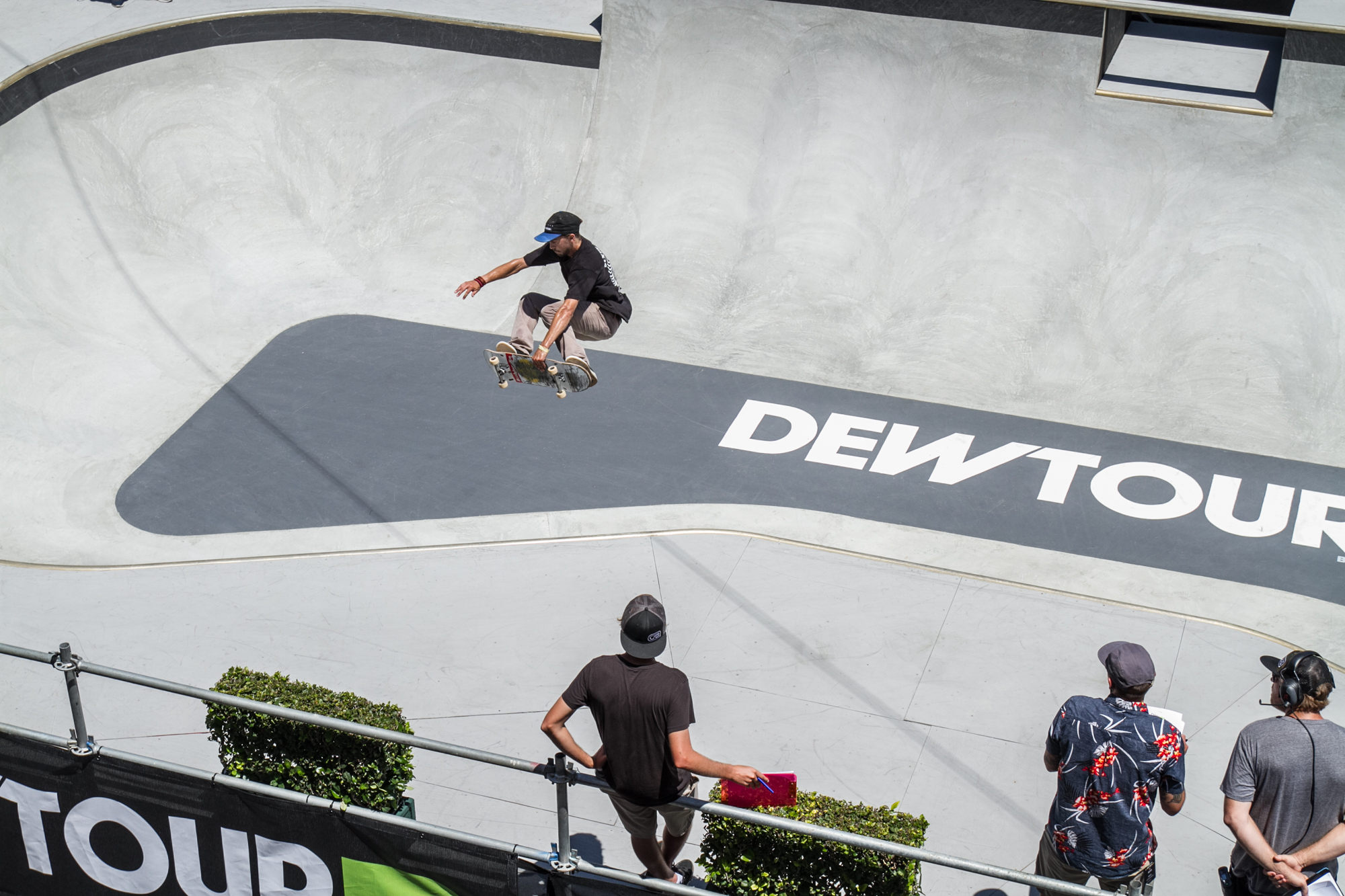 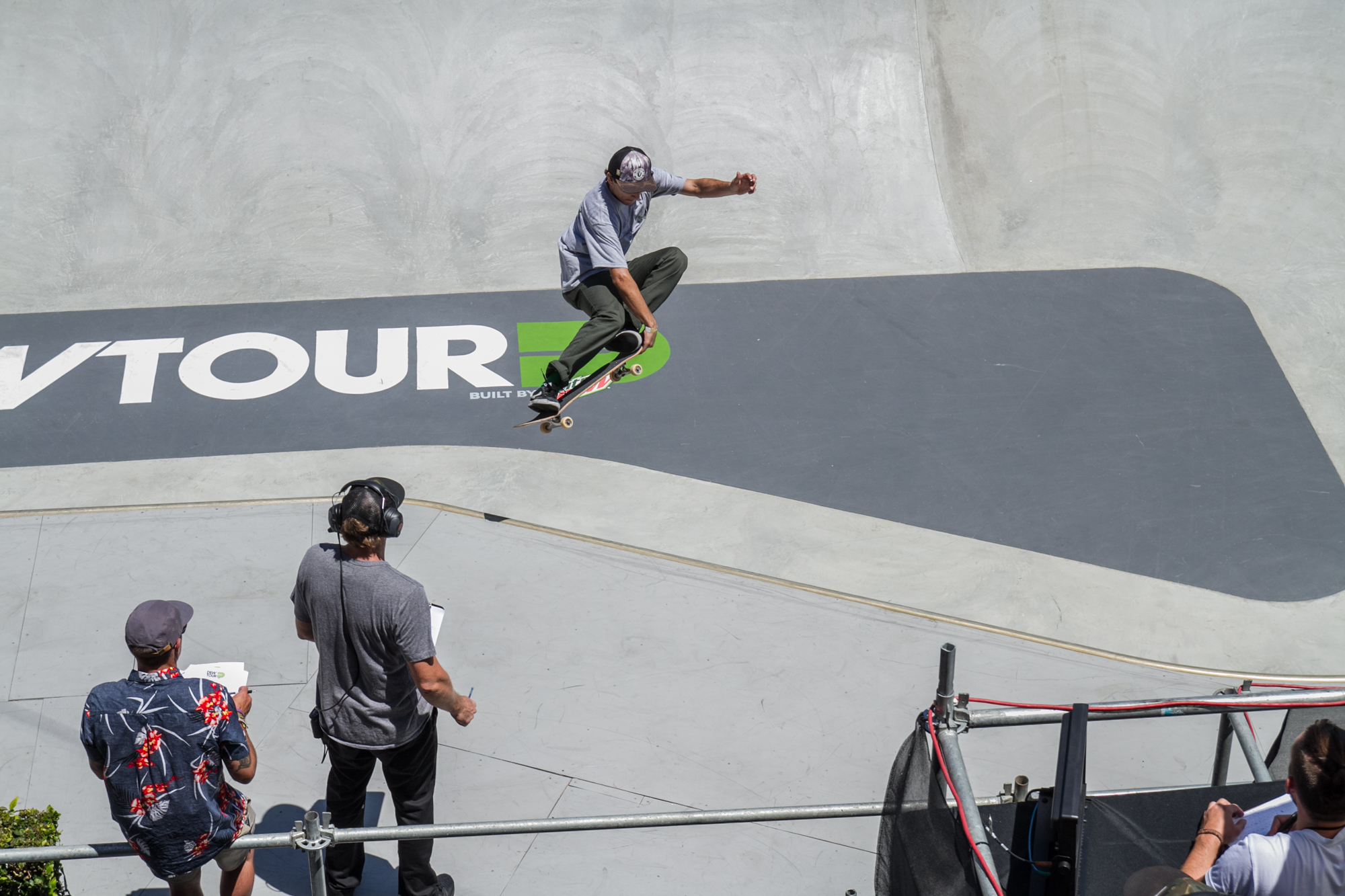 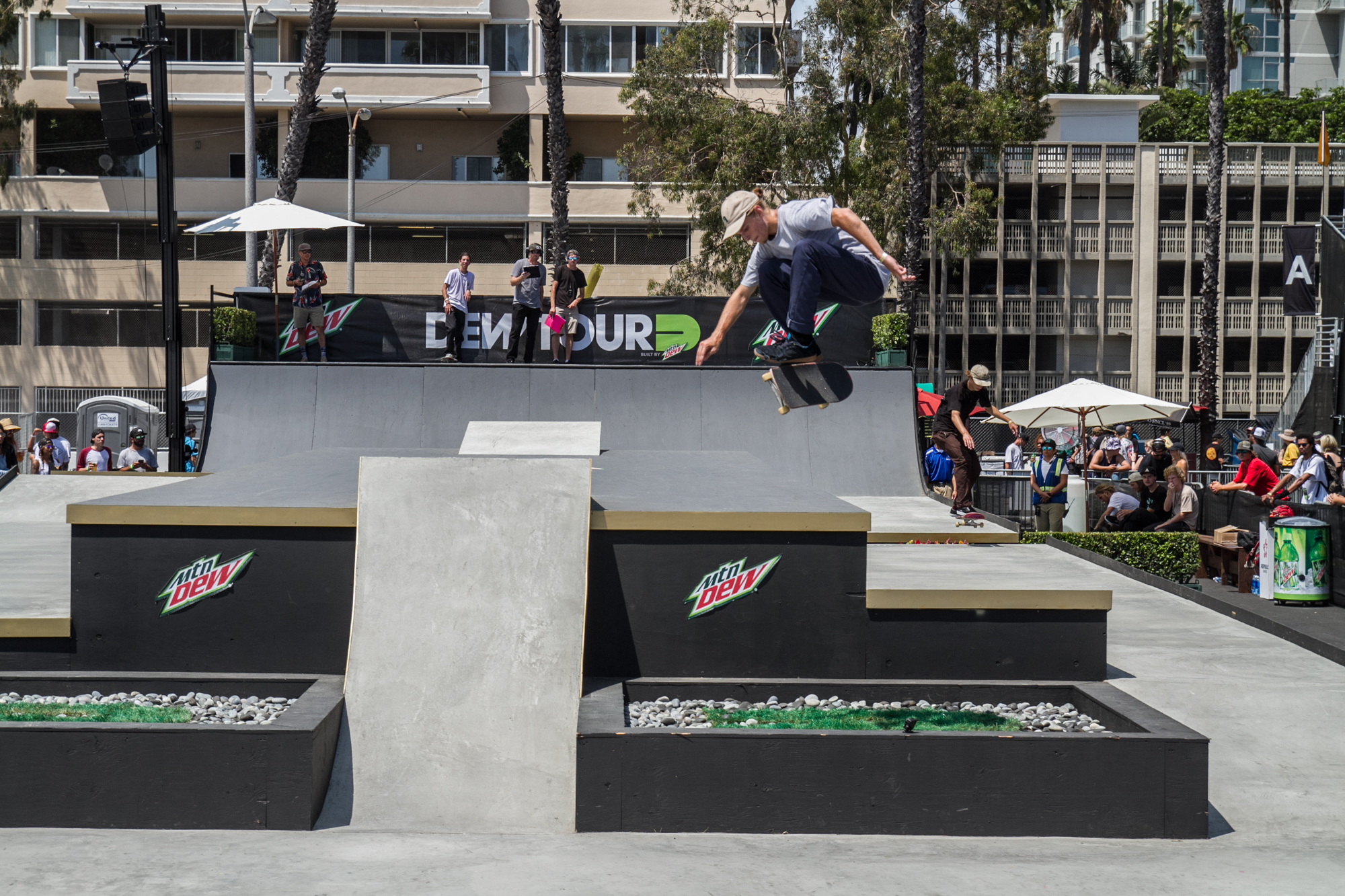 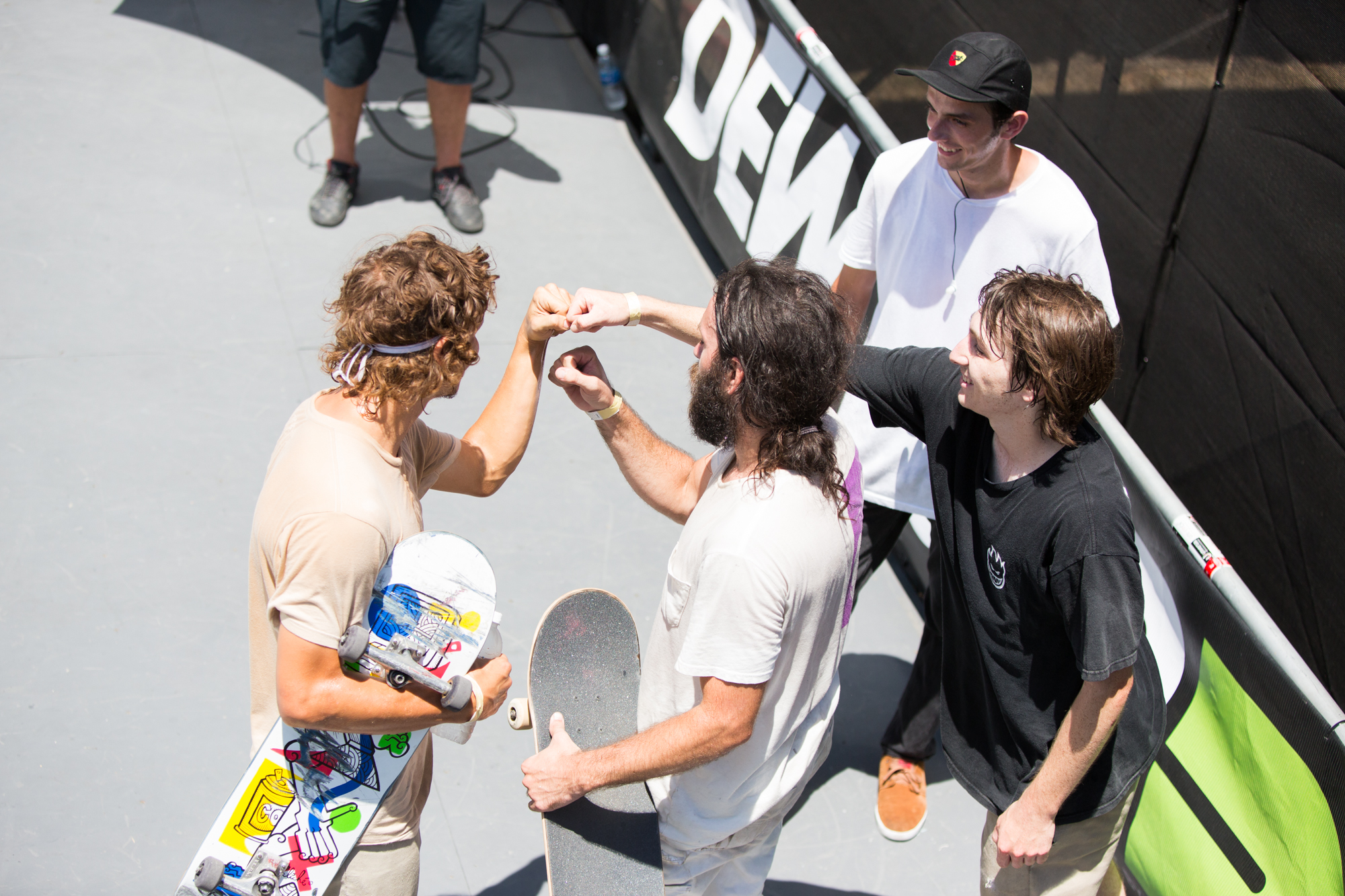 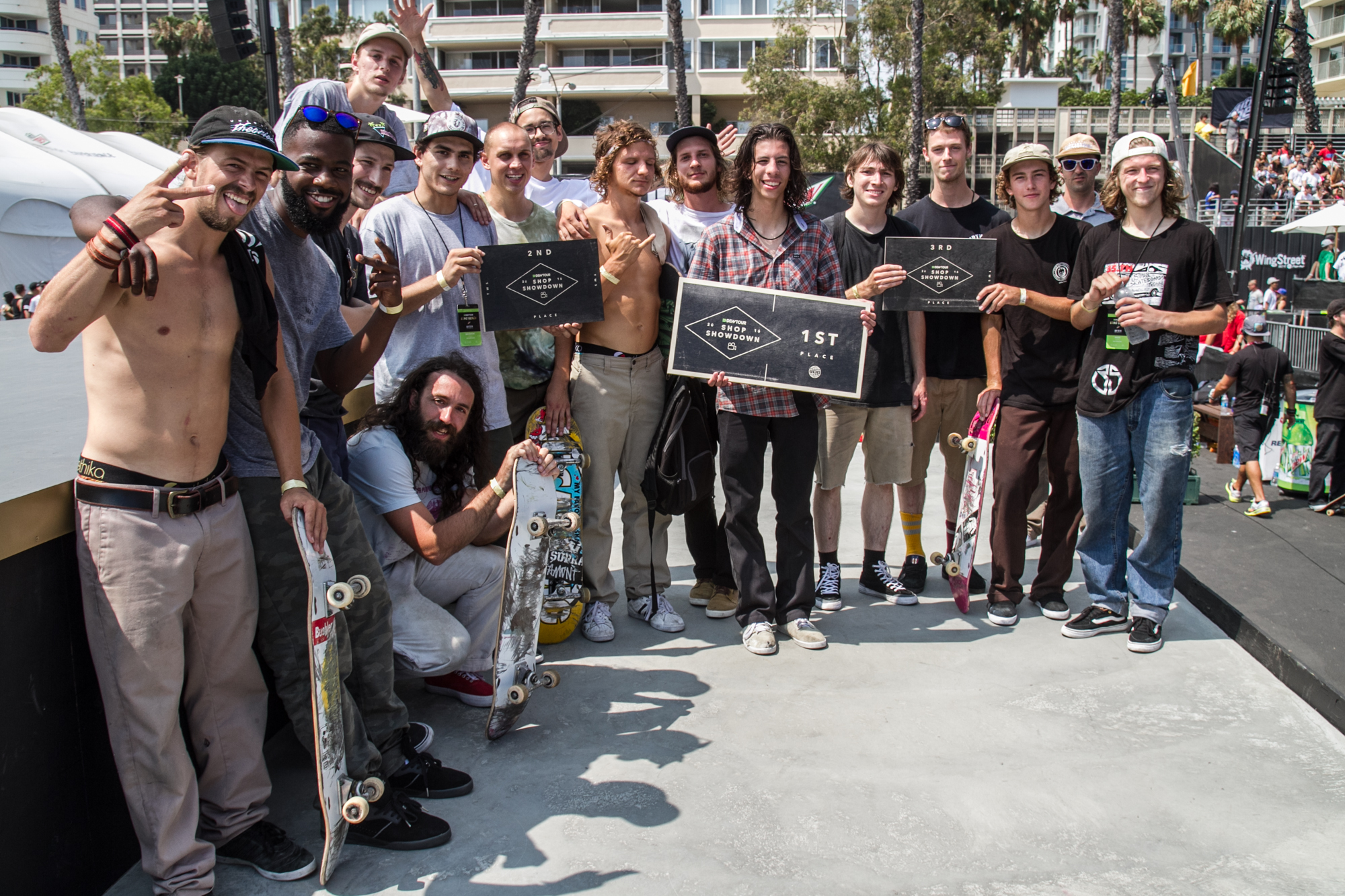 Over the past few months, 16 of the gnarliest shops in the U.S.A. have competed in an online contest on dewtour.com. They submitted short videos, and you got to vote for your favorites. The top four were invited to show down at the showdown, on the same four courses the pros compete on at Dew Tour 2016.

The winning shops were: Blind Side, from Tulsa, Oklahoma; Sixth Avenue, from Nashville, Tennessee; 35th Avenue, from Federal Way, Washington; and Index, hailing out of Dallas, Texas. Throughout the early afternoon, a few select skaters from each of these shops competed on the tech course, the bowl, the rail course, and the gap course.

The tech section’s standout was Matt Sharer. His unique approach to each obstacle was a fresh reminder of the creativity that goes hand-in-hand with skateboarding. In the bowl, however, everyone had some moves. Blindside’s Caleb Bagley threw down a backside disaster on the extension as well as an ollie up to frontside disaster on the extension. Index’s Tony Gomez has a crail-air that left more than a few people jealous. 35th’s Nick Satter wowed the crowd with judo airs, finger flips, and a Russian boneless on top of the extension. But Sixth Avenue’s Blake Moore was the one to land an invert, as well as a clean backside Smith grind over the channel.

As with the pro contest, the rail section is where things really got heated. Christian Fonseca, skating for Sixth Avenue, landed a kickflip boardslide on the A-frame rail, but it was Index’s Kyle Stone who dominated the rail section, landing tricks left and right. In the short heat, he managed to pull a Barley grind down the six-stair rail, a frontside bigspin over the six-stair rail, and a frontside flip over the nine-stair rail.

The gap section was up last, and it saw some heavy skating as well. Simon Bannerot, from 35th Avenue, landed a few moves, including a smooth backside 360 down the bump gap nearly every try in practice, and first try during the heat. Blindside’s Colt Compton was not afraid to tackle the biggest of the gaps, with a backside grab, a boneless, and even the elusive Benihana. But the real standout was Christian Fonseca, fresh off a rail session, claimed a first-try varial heel down the big gap, a backside 360 down the big gap, and even an impossible over the six-foot flat gap—all for Sixth Avenue.

The four teams were all well matched, with standouts in each section. Everyone put on a good show, and each shop represented well. But in the end, it was Nashville’s own Sixth Avenue taking the cake.

Blindside shop rider Damien Alzidan had backside Smith grind on the out rail in the tech course on lock all weekend. Photo: Baldwin