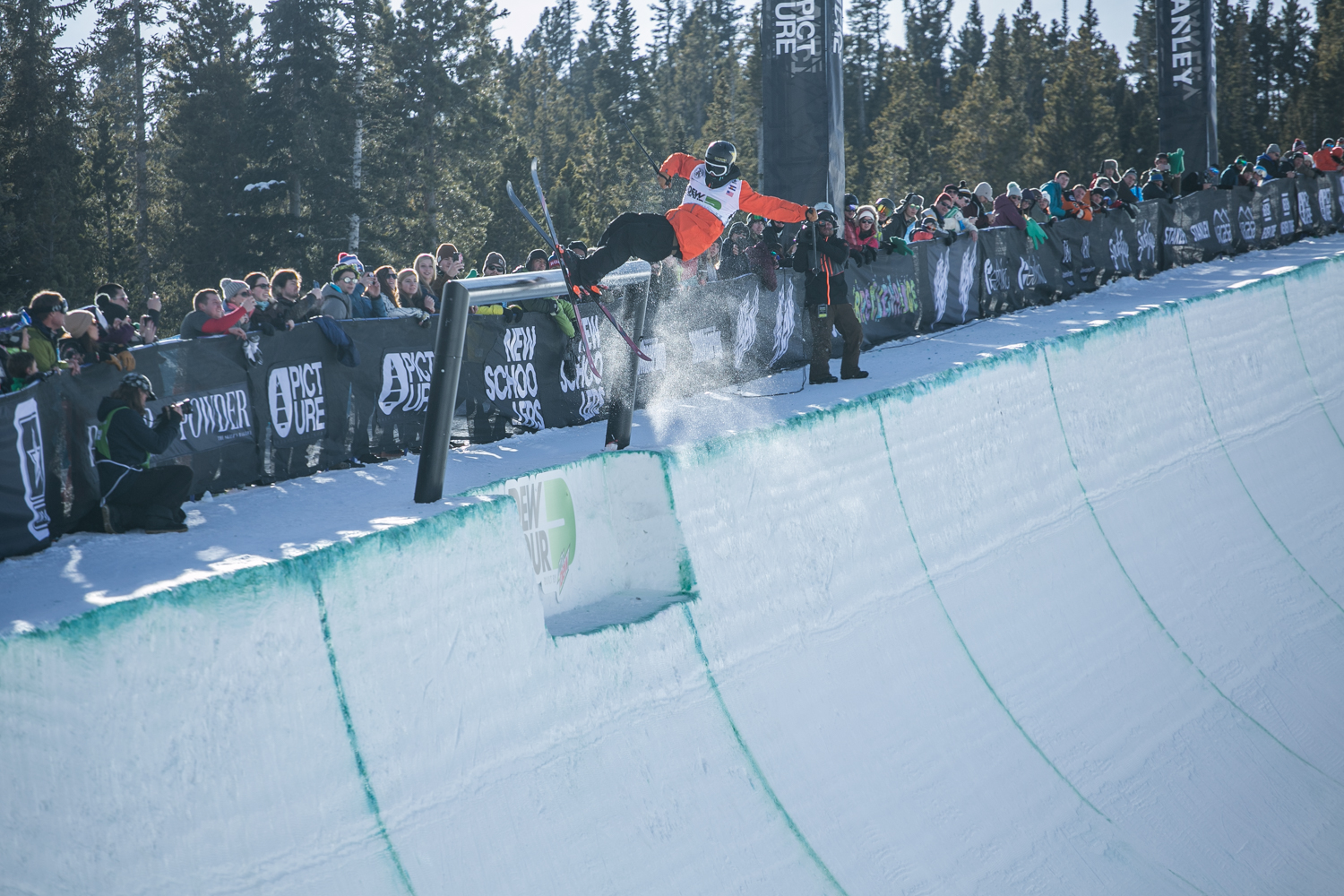 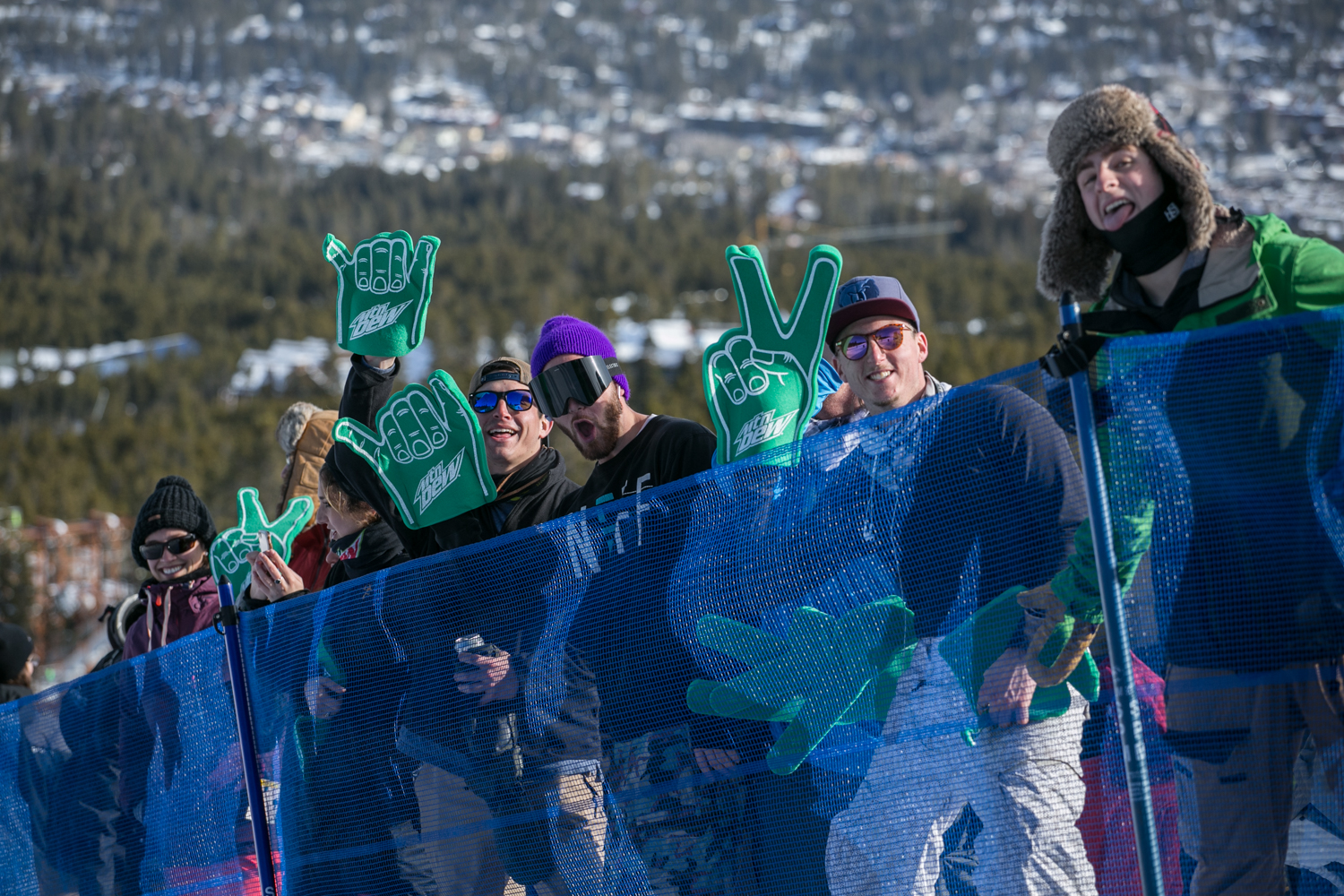 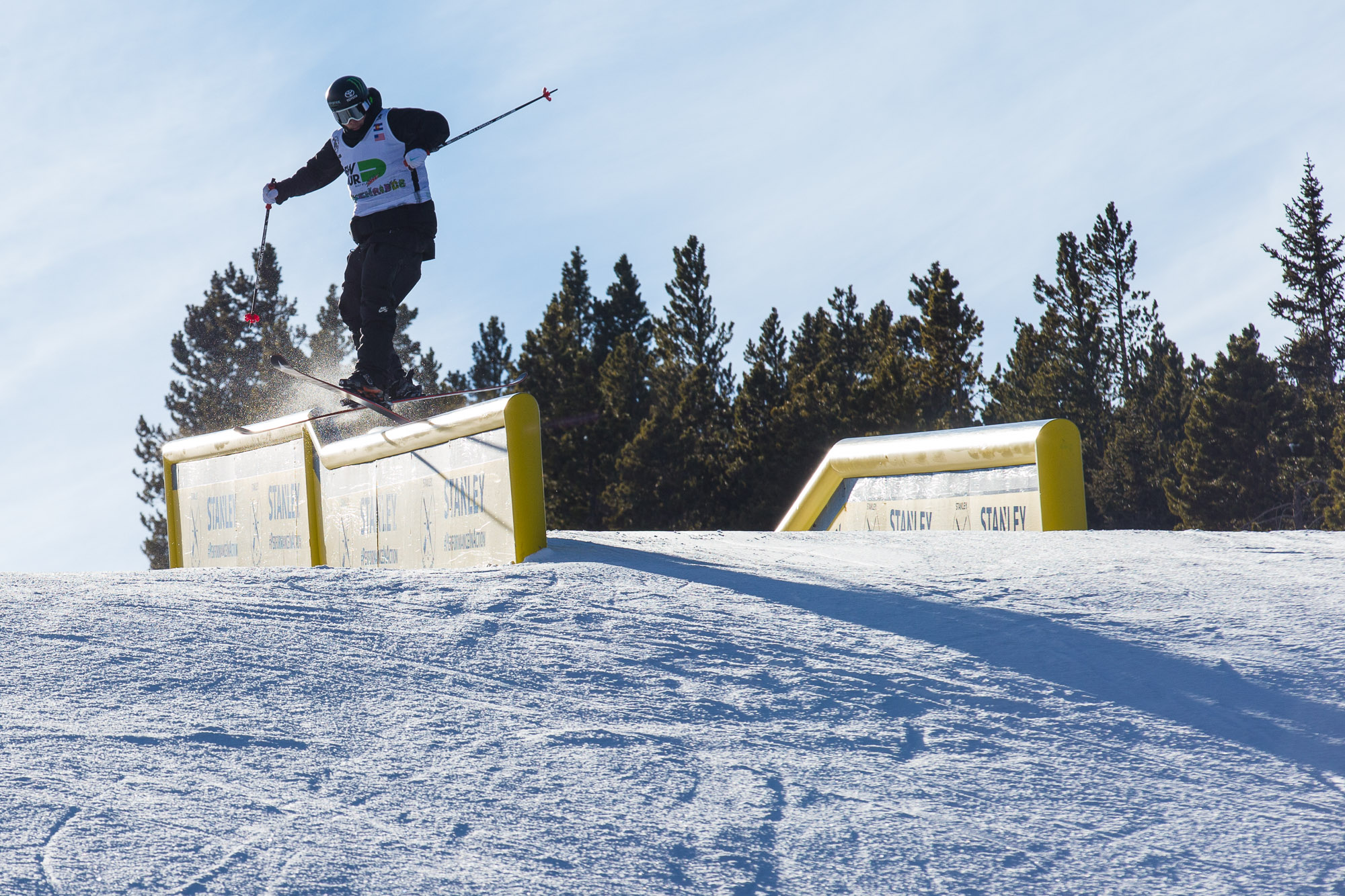 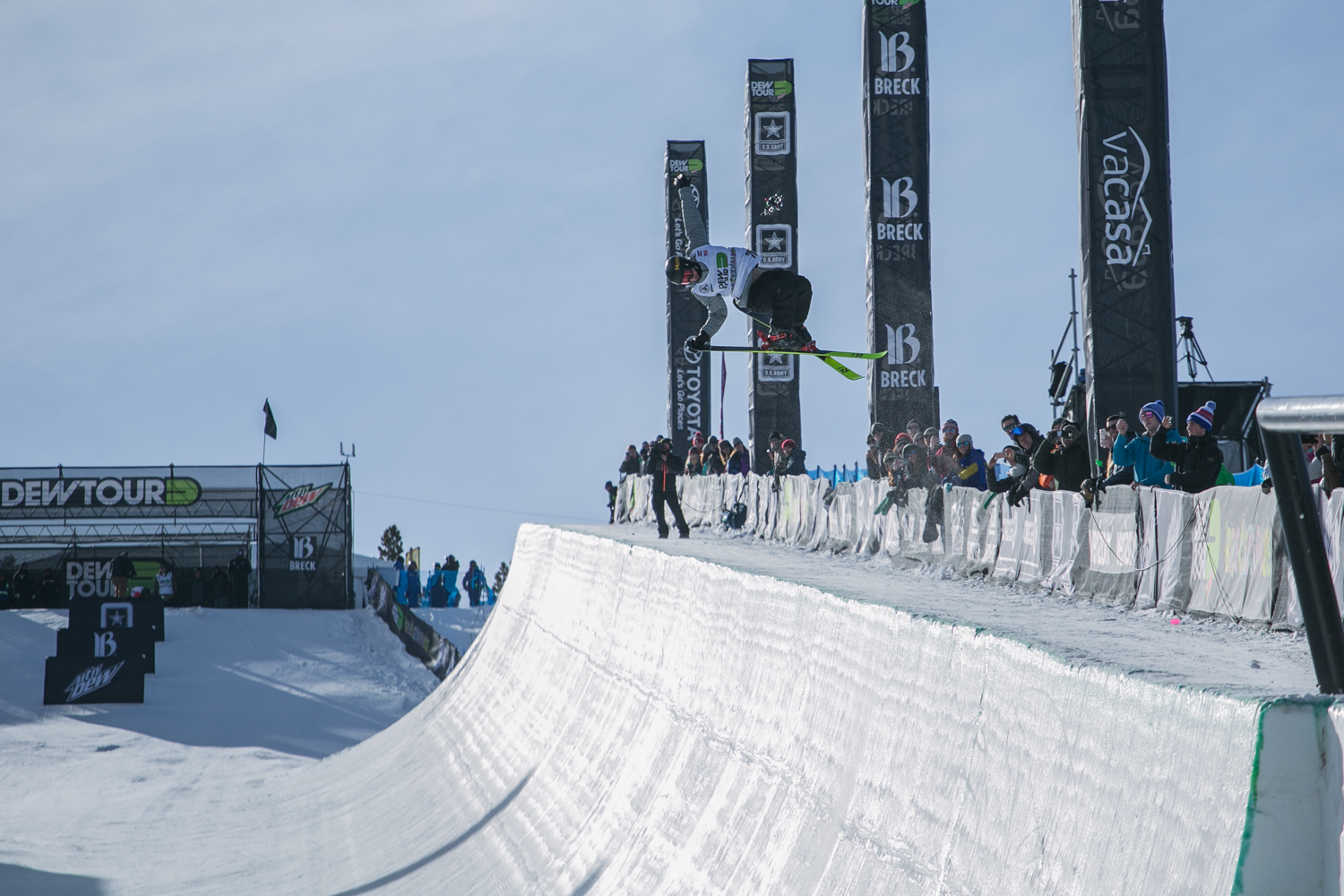 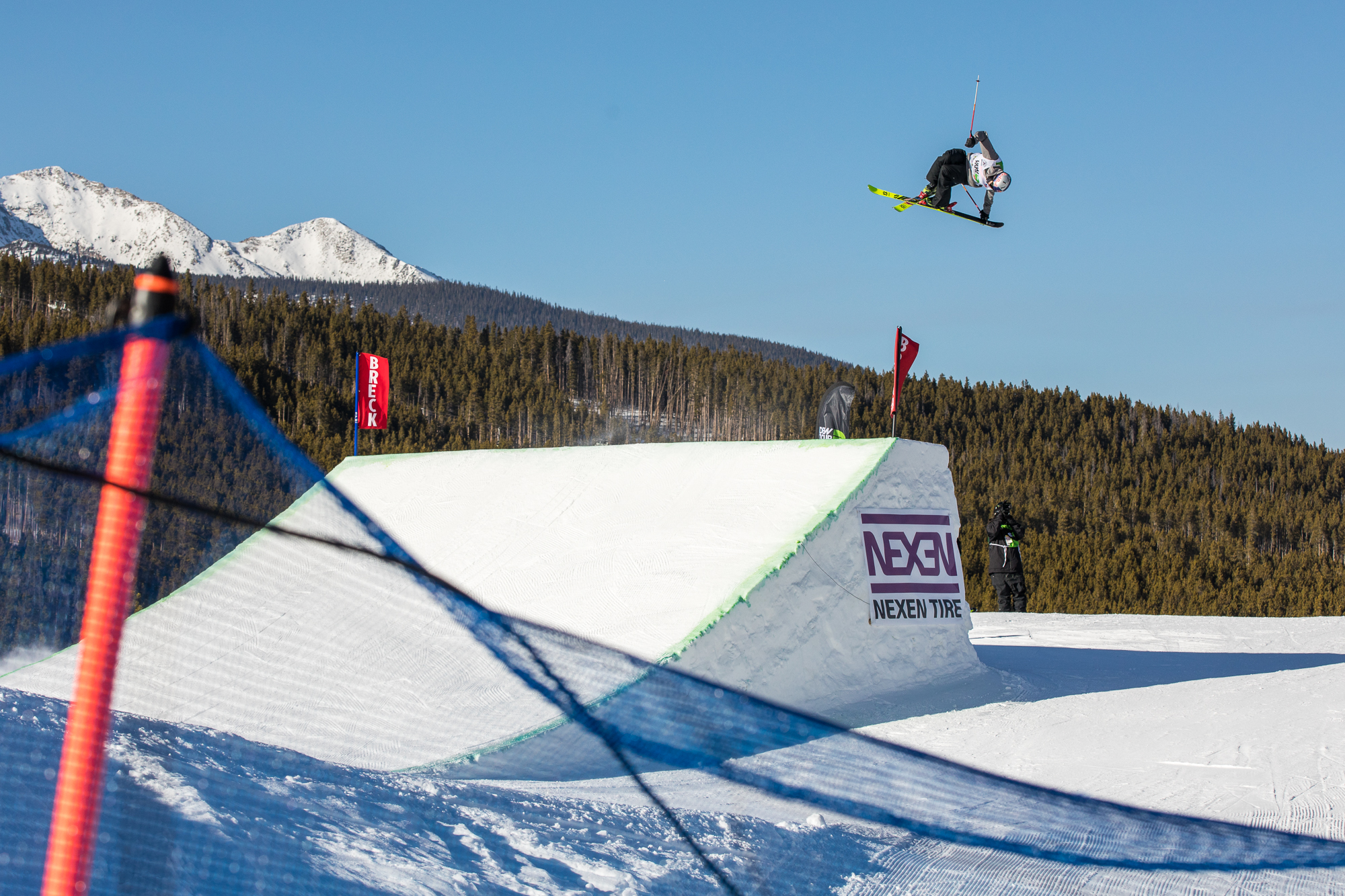 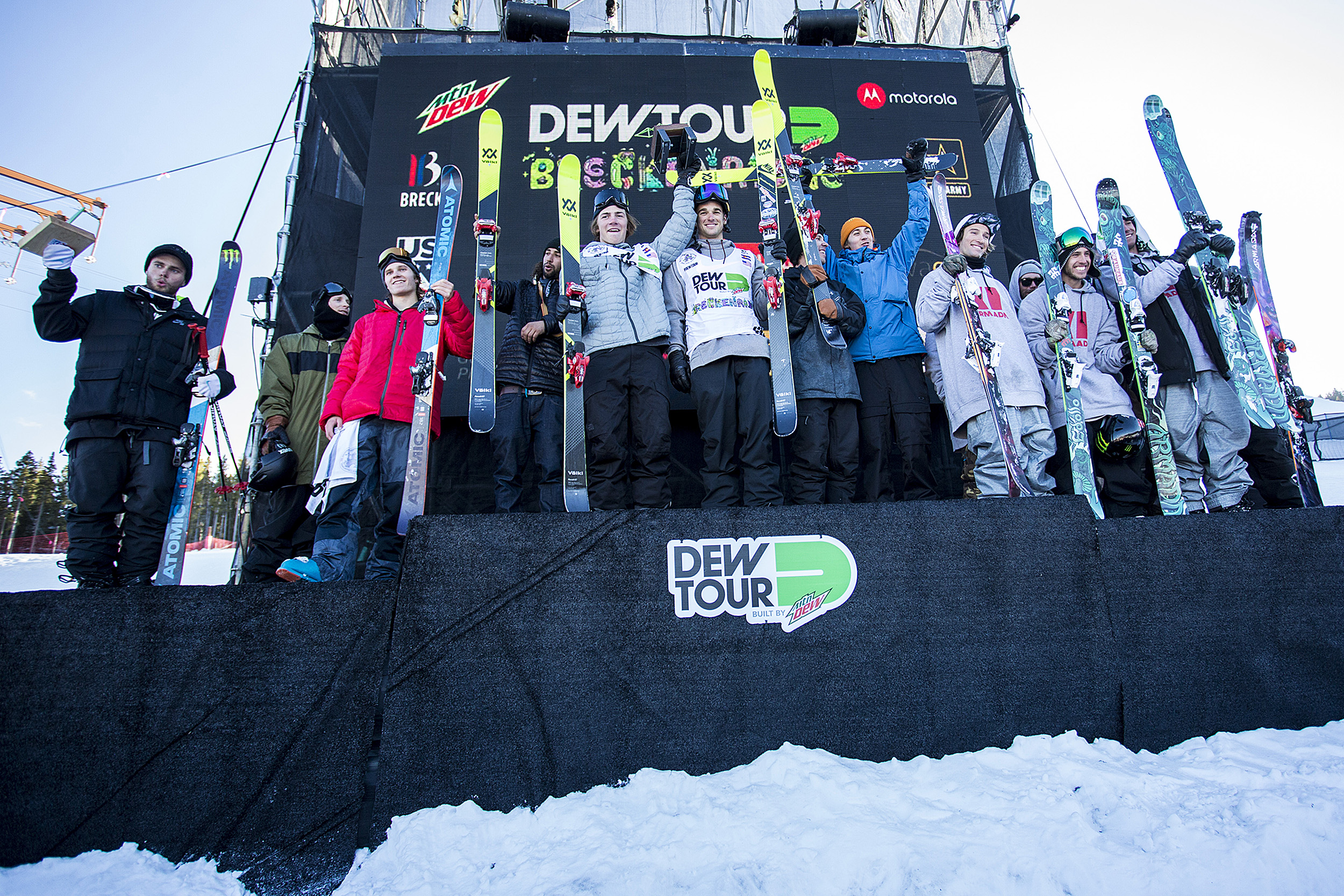 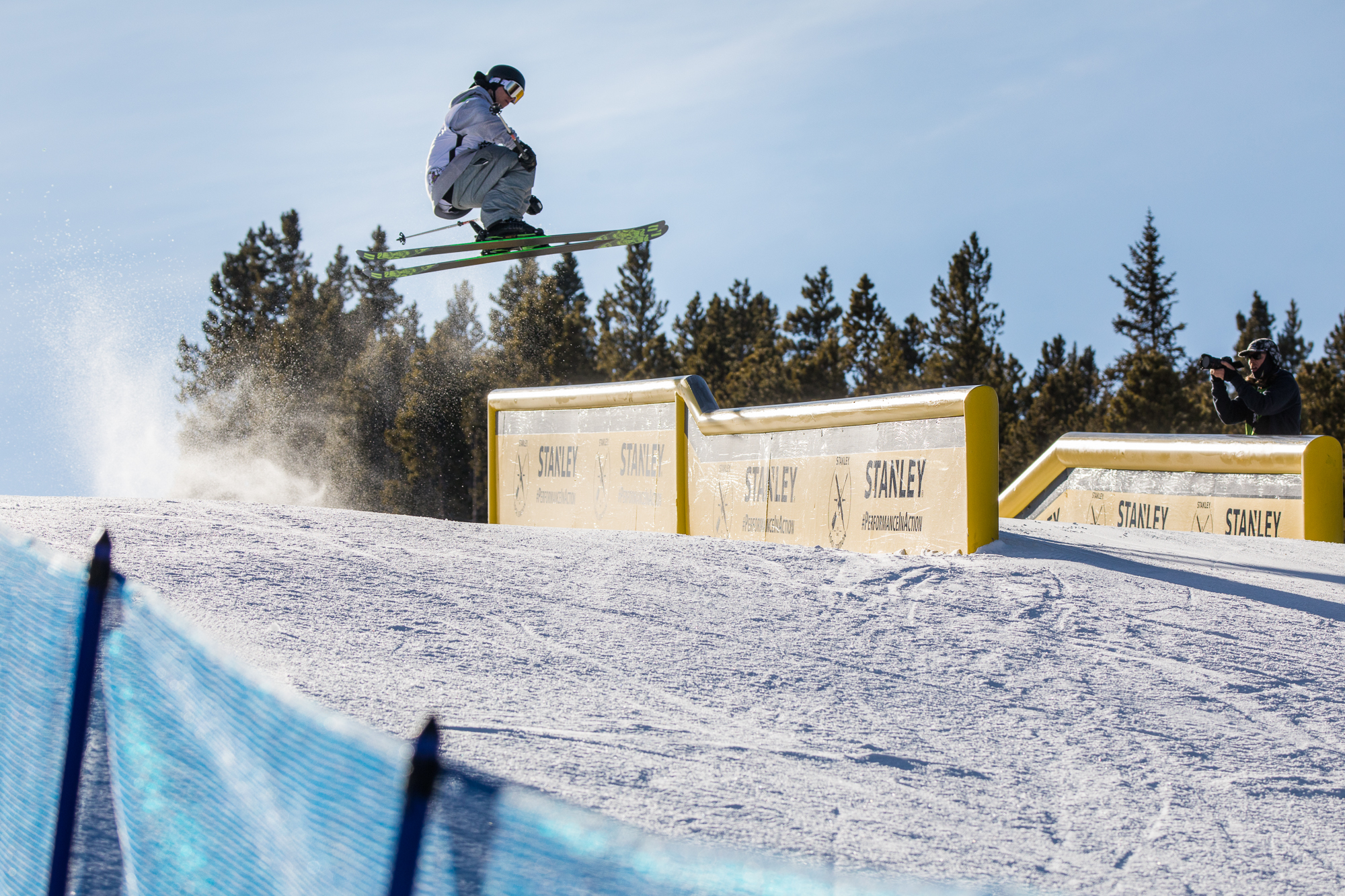 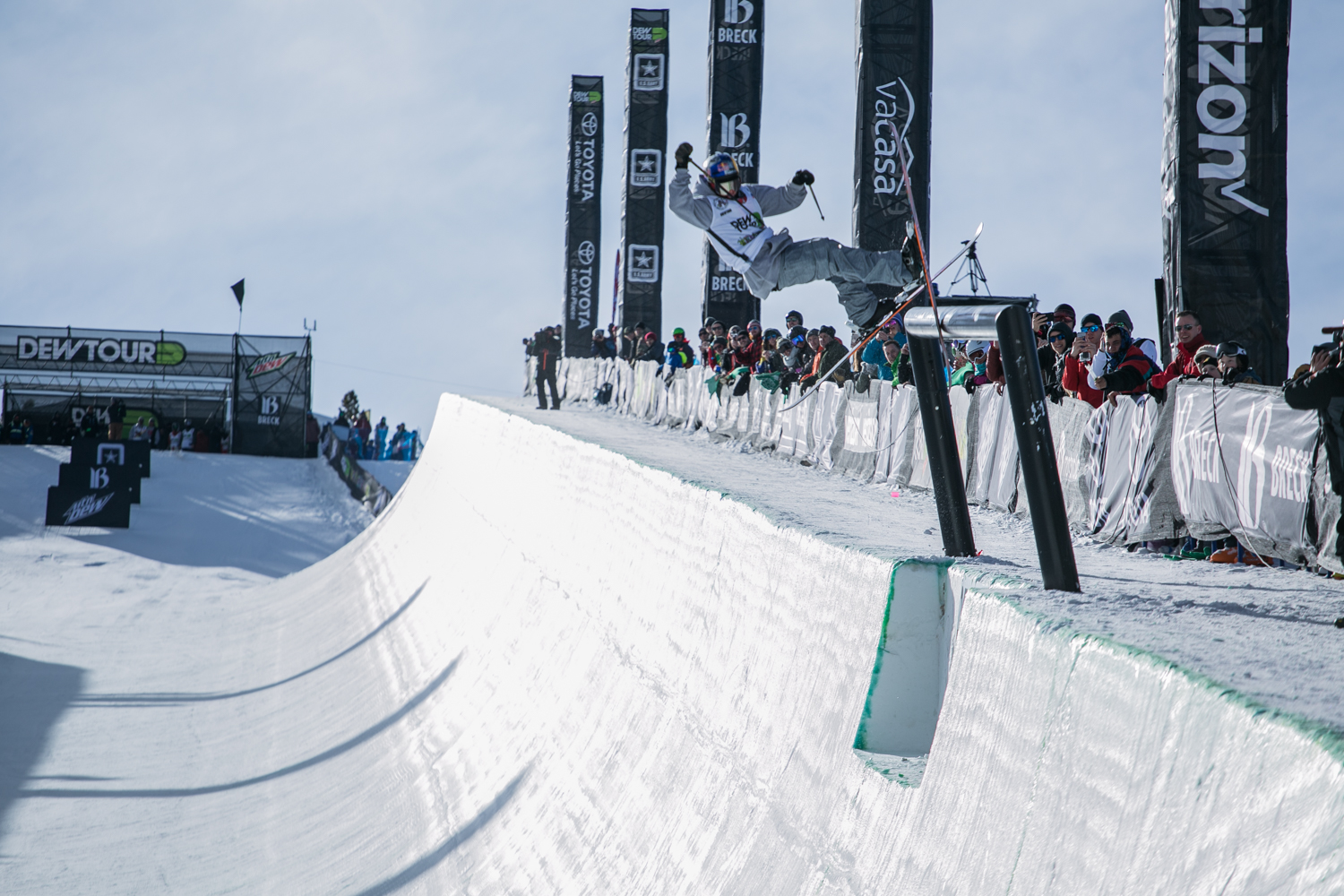 The Dew Tour Ski Team Challenge kicked off in a festive mood today under sunny skies. The unique contest format brought together a diverse group of athletes, including those who haven’t competed in years, legends in the sport, and talented rookies. With a looser competition format, athletes had the freedom to focus a bit more on style, and judges looked for creativity on unusual features.

Team Volkl, with Nick Goepper on jumps and jib and Hunter Hesse on pipe, took home first; followed by Armada with Henrik Harlaut on jumps, Quinn Wolferman on jib, and Torin Yater-Wallace on pipe. Atomic took third with Nicky Keefer on jumps (though Gus Kenworthy took the last run after Keefer fell), Kenworthy on jib, and Miguel Porteus on pipe.

MODIFIED SUPERPIPE
The team challenge kicked off with the modified superpipe. Park crews added four rails to the bottom of the pipe, including two impossibly high loveseat rails that skiers struggled to hit. The bottom featured two more approachable rails where the pipe flattened out.

Judges penalized skiers who treated the run like a traditional pipe course and ignored the unnatural additions. Creative approaches to incorporating the troublesome rail, and barely-taps on the loveseat, were rewarded much higher than a technical pipe trick done alongside it.

Hunter Hesse, of Volkl, took first with a stylish run including one of the biggest tricks of the day—a left dub 1260 safety—and a unique approach to the loveseat: he hopped out of the course and slid underneath it, with a 360 and a hand drag. The contest was low-scoring, though. A 78.66 was enough for Hesse to take home the win.

“I thought that taking the course in the most original way possible would be the best thing that I could do,” said Hesse. “If [the rail] is too big to go up on to I might as well go under it. Why not add a little bit of flavor to that and do a 360 out?”

The riders welcomed the more casual, communal atmosphere of the team competition. “The big difference is there’s no pressure. It’s cool to be out here on a team instead of doing it for yourself,” said Aaron Blunck, who took second in individual superpipe Friday as well as taking second—with a score of 76—in today’s modified superpipe. He went on to explain that athletes typically only compete alongside their countrymen, and today they get the rare compete in international teams. Head’s team, for instance, included Blunck, Evan McEachran, and Sweden’s Jesper Tjader.

Torin Yater-Wallace took third for Armada, after managing a tail-tap on the loveseat and a 270 on to the final rail. His pipe run was one of the cleanest, with a stylish backside air with tail grab to start, followed by a series of traditional pipe tricks: a right 900 tail, a left 720 safety, a switch right 720 mute, and a left 900 tail.

Overall, the pipe scores set the teams up for exciting jib and jump portions of the contest, which is scored cumulatively across the three sections. With the exception of Faction—whose pipe competitor, Cody Cirillo, put down admirable scores considering he hadn’t been in a pipe in seven years—the scores were spread across a small window of 6.66 points.

JIB SECTION
In the jib section, skiers put down incredibly technical runs, with high scores across the board. Without jumps to worry about (like in the slopestyle competition), skiers like Quinn Wolferman and Gus Kenworthy, who have incredible rail game, were able to put down technical, creative runs.

Nick Goepper took second in the rail portion by a small margin. After a mistake in his first run, he put down an impeccable switch right 450 continuing 270, a switch left 270 pretzel 450, and a right 270 on 450 out.

Armada’s Quinn Wolferman, a young skier from Montana whose name is one to watch, took third. He kicked off with a well-executed right 450 to switch, a switch left 450 out, and a front 810 with an iffy grab—it looked like he was going for Japan or safety but didn’t quite get it.

Team Armada came out in full force today, with a crew of seven guys including Tanner Hall and Breckenridge local Pat Goodnough supporting the team. They were clearly having the best time; showing off matching sweatshirts, heckling each other, and milking a running joke about Goodnough, team co-captain, being the food manager. It likely had something to do with his rubber chicken, fashioned into a necklace, which became the team’s unwitting mascot.

“It’s a good squad of just such good people,” said Wolferman. “I’m just so honored to be a part of a team that I always looked up to. Now, to get to compete with people that I was watching just a few years back and how fast things can change, I’m just really excited to be here and be a part of this team.”

Jesper Tjader, skiing for Head, took fourth, with a mind-blowing right 630 on to switch on the first rail. The rest of his run wasn’t quite technical enough to bump him into the top three.

JUMPS
The jumps started in the late afternoon, with an icy, shady course.

Armada’s Henrik Harlaut effortlessly put down the most stylish runs of the day. He’s smooth and consistent, and spins on mind-bending axes that his grabs naturally influence and amplify. His highest scoring run, a right dub 900 Japan followed by a switch 1080 dub double seatbelt Japan, earned him an 87—not quite enough to catch Nick Goepper. The Volkl skier won the section by just 1.6 points with a techier and perfectly executed left dub 1260 tail and a switch right dub 1260 mute.

Nicky Keefer—a rare face in competitions who was skiing for Atomic—took a massive fall on his first hit, which called for a medical hold. His teammate Gus Kenworthy, after hearing that Keefer was awake and lucid, decided to take a jump run on his behalf. He was able to secure third with a switch right dub 1080 Japan and a switch left dub 1260 safety, despite taking the jumps a little slow.

“I was nervous. It was hard watching Nicky fall. It’s hard seeing a friend, a teammate, crash, and hurt himself. But after I knew that he was okay, and he was talking and knew where he was and all that, it gave me a little peace of mind, and I knew I wanted to land something for him,” said Kenworthy. “It wasn’t necessarily my best run ever, but I hadn’t hit the jumps yet so I was happy to land something.”

At the podium ceremony, the individual winners for each category—modified superpipe, jibs, and jumps—took home $2,000. The winning team and their captain will split prize money to the tune of $20,000. With the conclusion of the ski team challenge, 2017’s Dew Tour Breckenridge came to a close.

Aaron Blunck getting creative in the modified Superpipe for the Head Skis team in the Dew Tour Ski Team Challenge. Photo: Durso

Dew Tour fans doing it up during the Ski Team Challenge. Photo: Walter

Henrik Harlaut sending it in the jumps section of the Dew Tour Ski Team Challenge to help the Armada team to a second place overall finish. Photo: Crosland

Hunter Huss helped lead the Völkl Ski team to the overall win in the Dew Tour Ski Team Challenge with a commanding performance in the modified Superpipe. Photo: Durso

Nick Goepper handled the jib section for the Völkl crew in the Dew Tour Ski Team Challenge. He tied with Atomic's Gus Kenworthy for highest score in the jibs, helping his team to the overall win. Photo: Walter