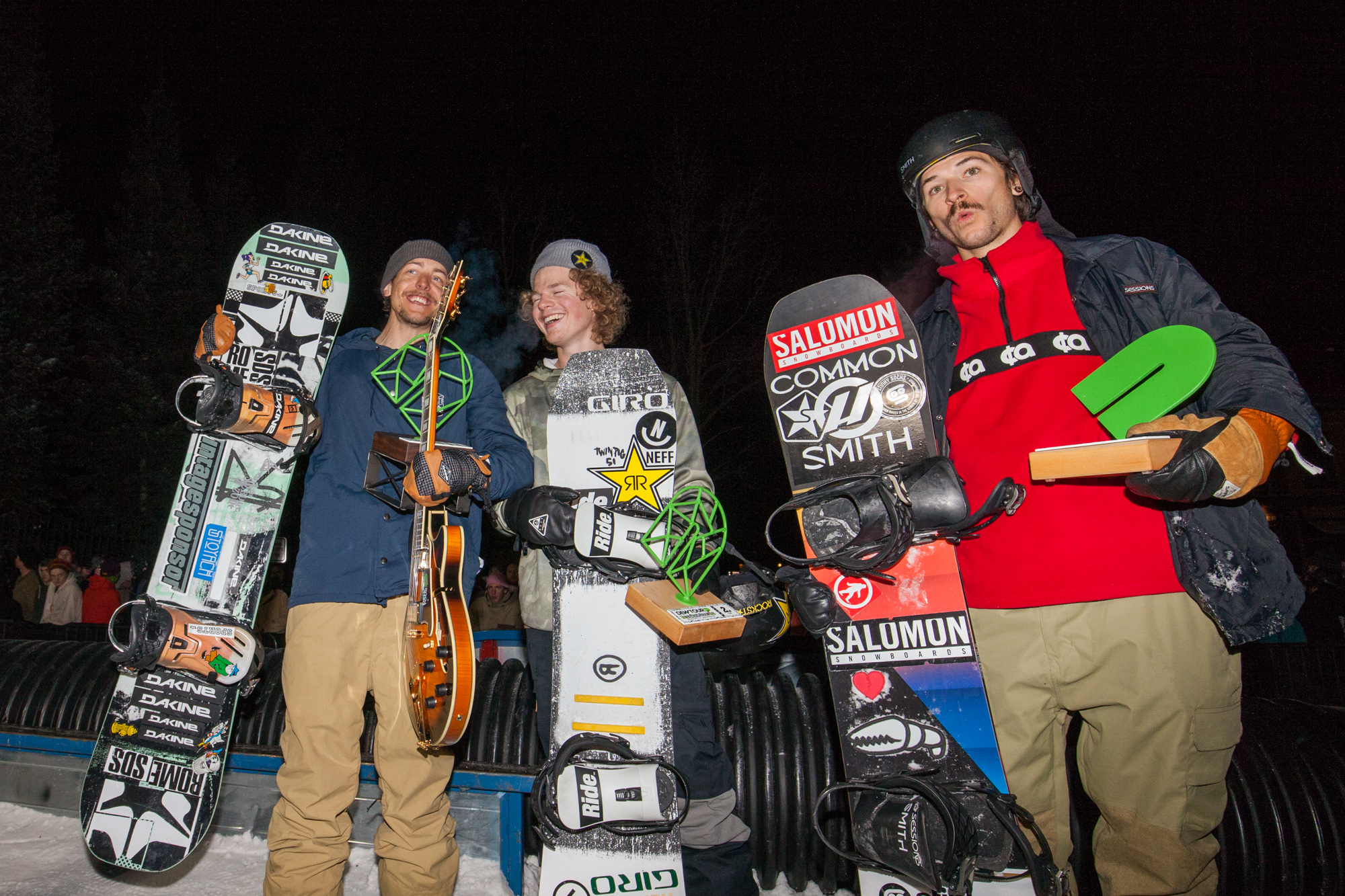 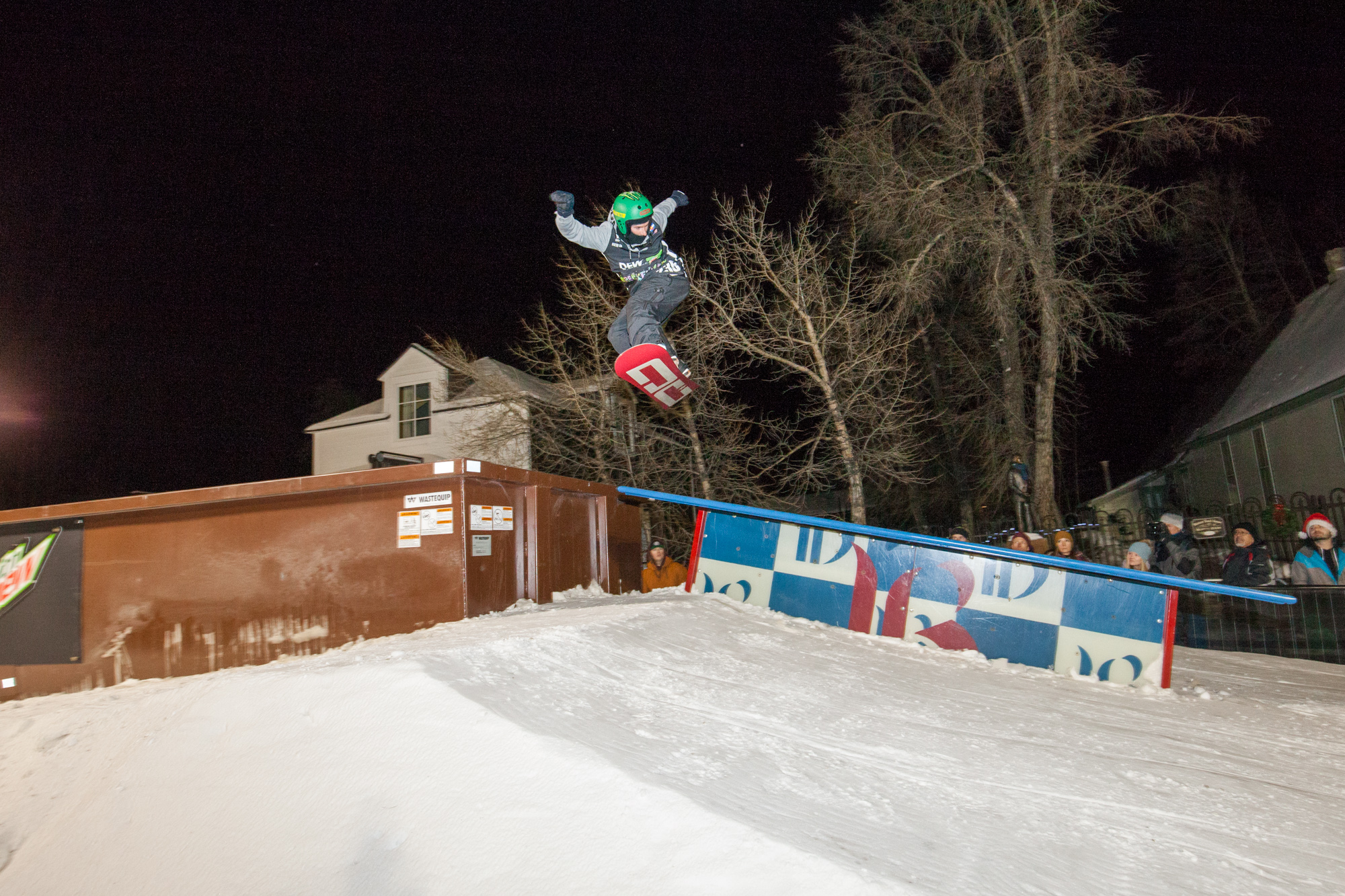 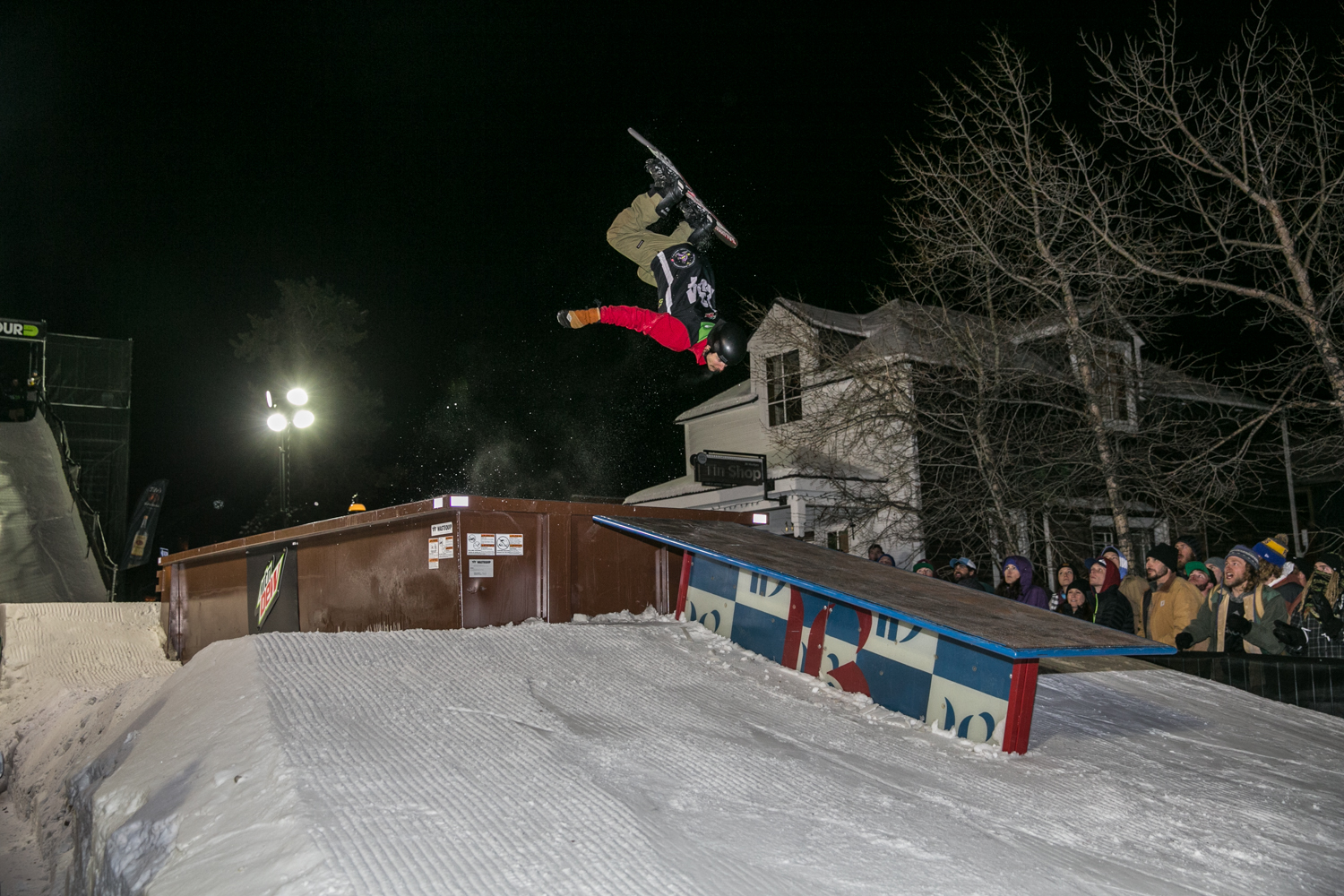 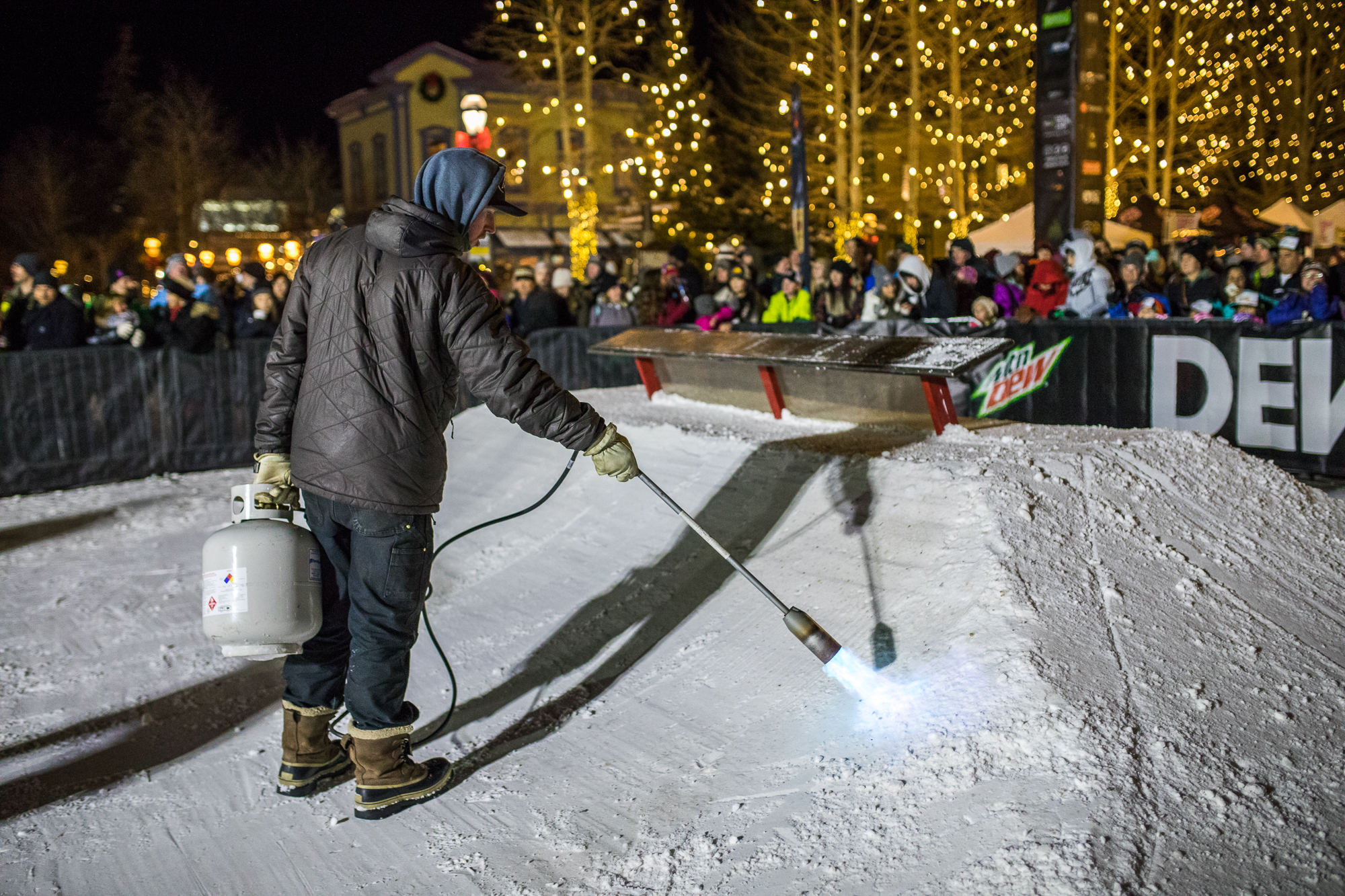 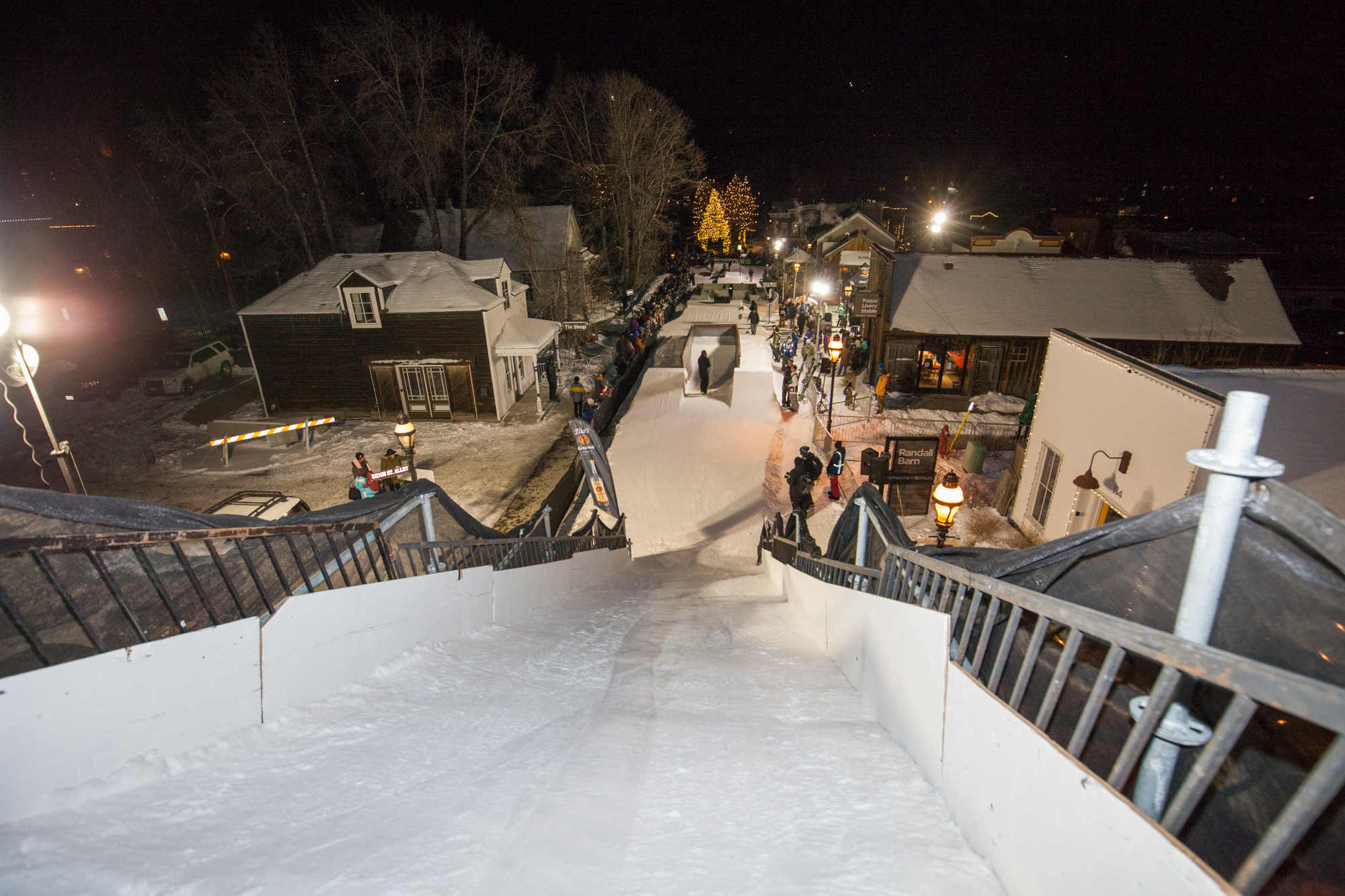 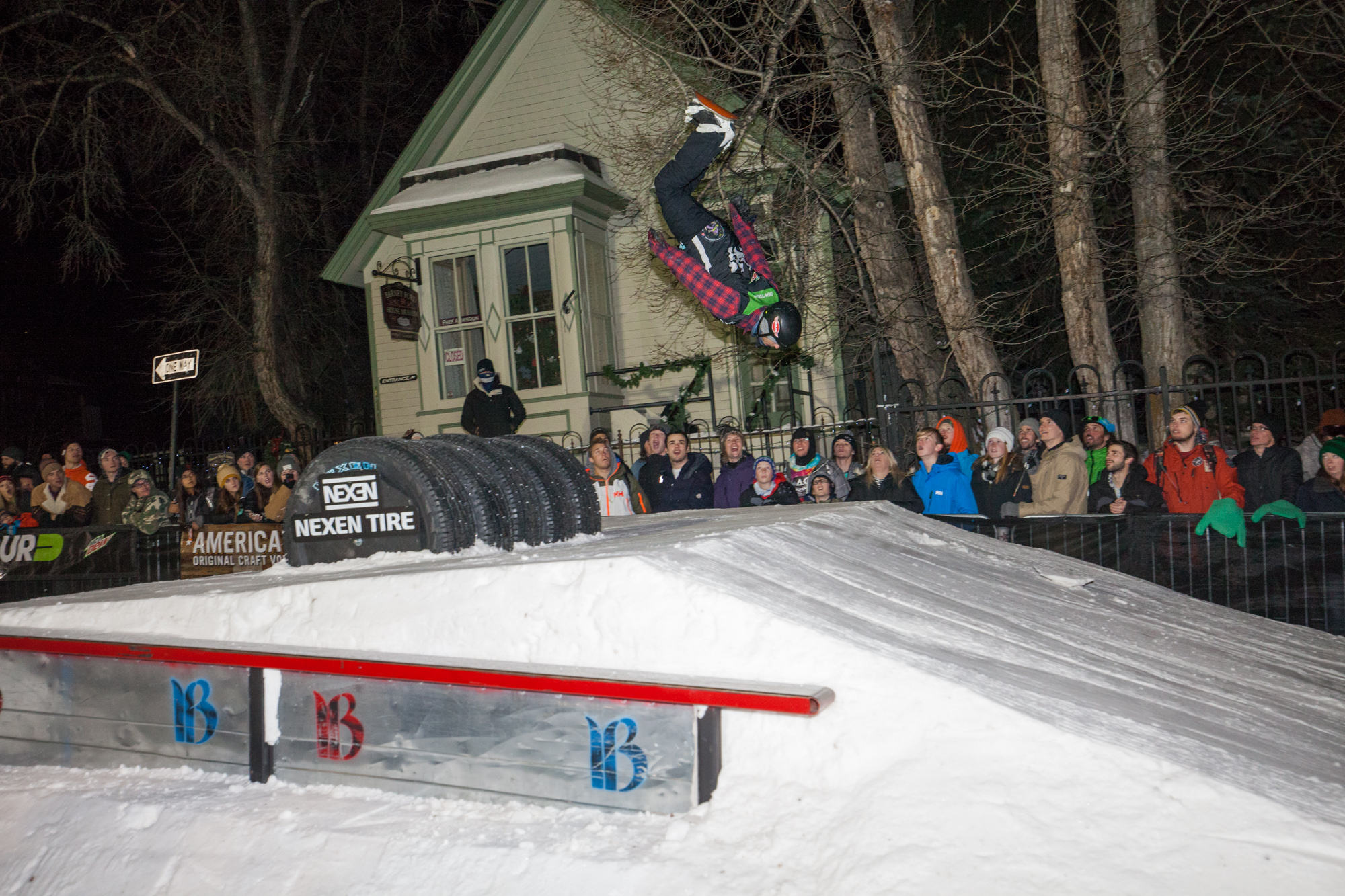 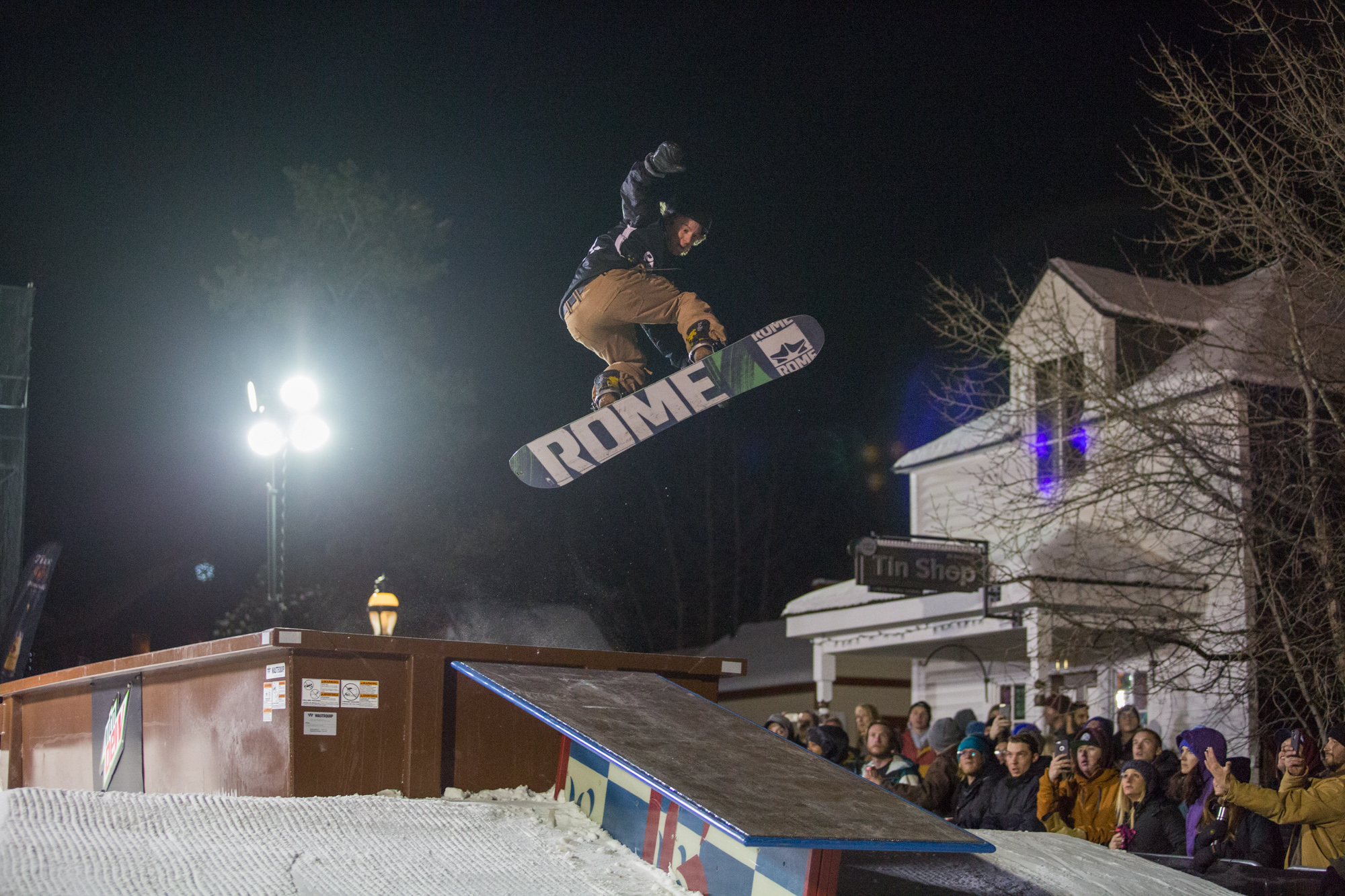 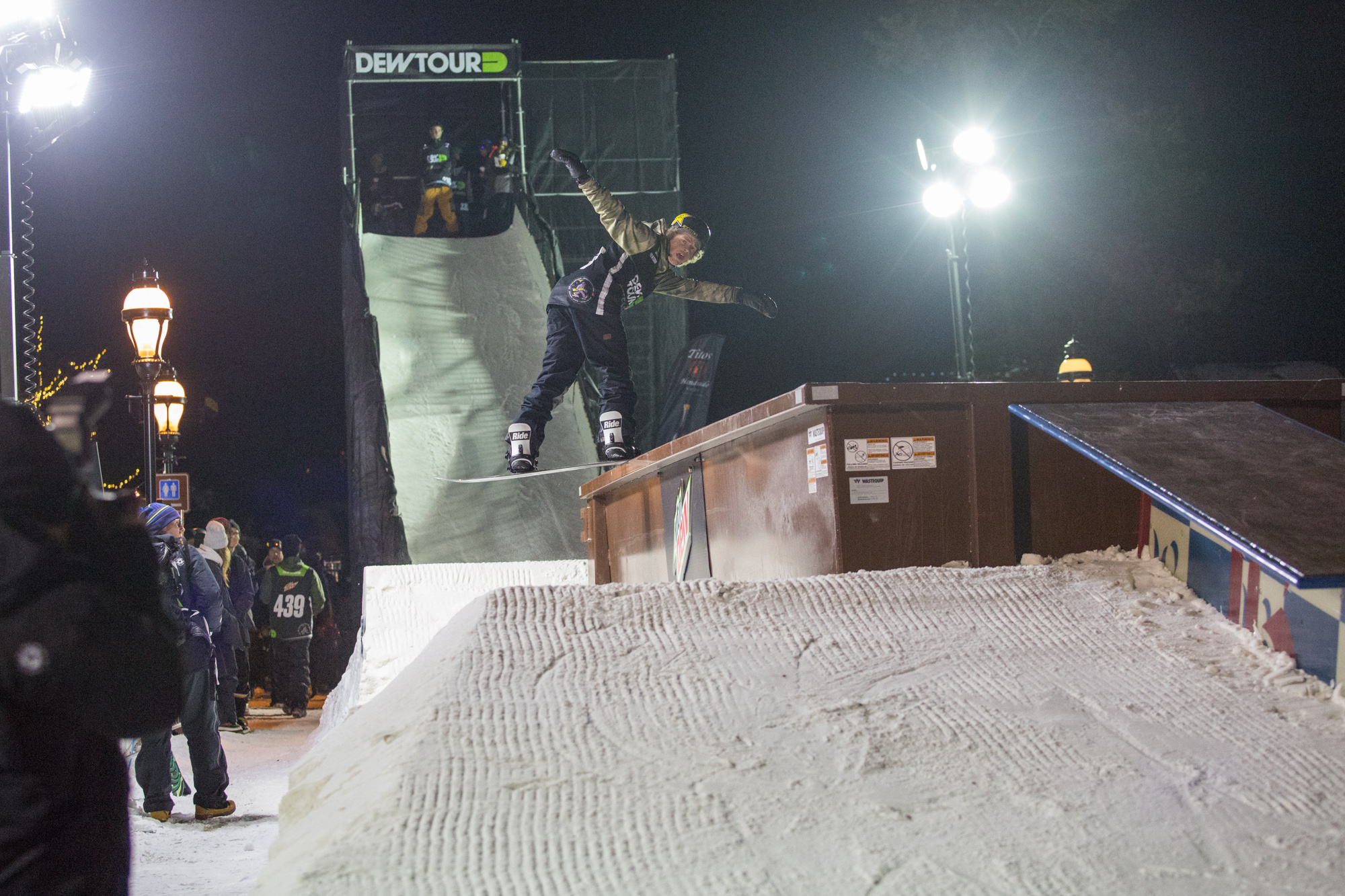 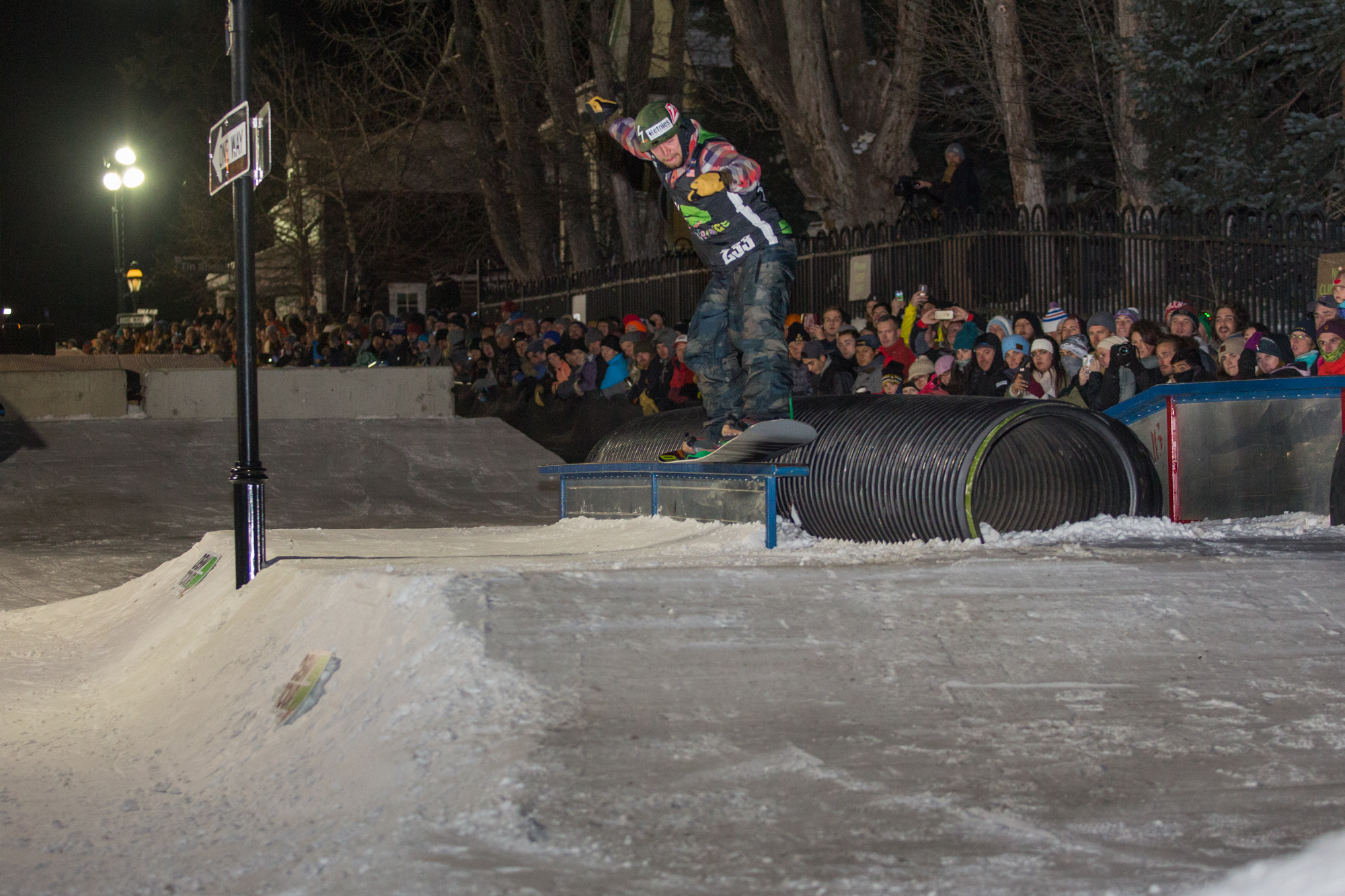 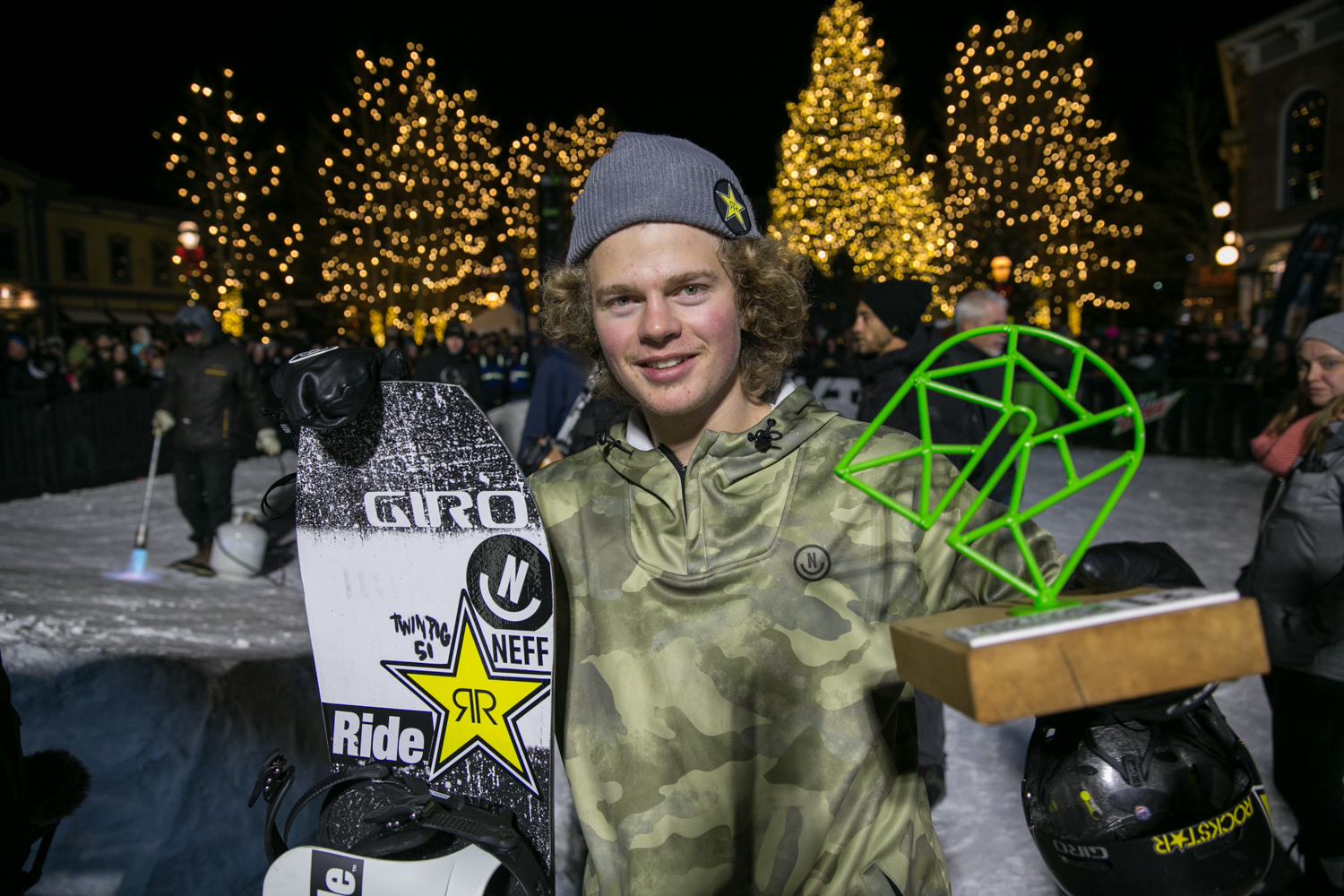 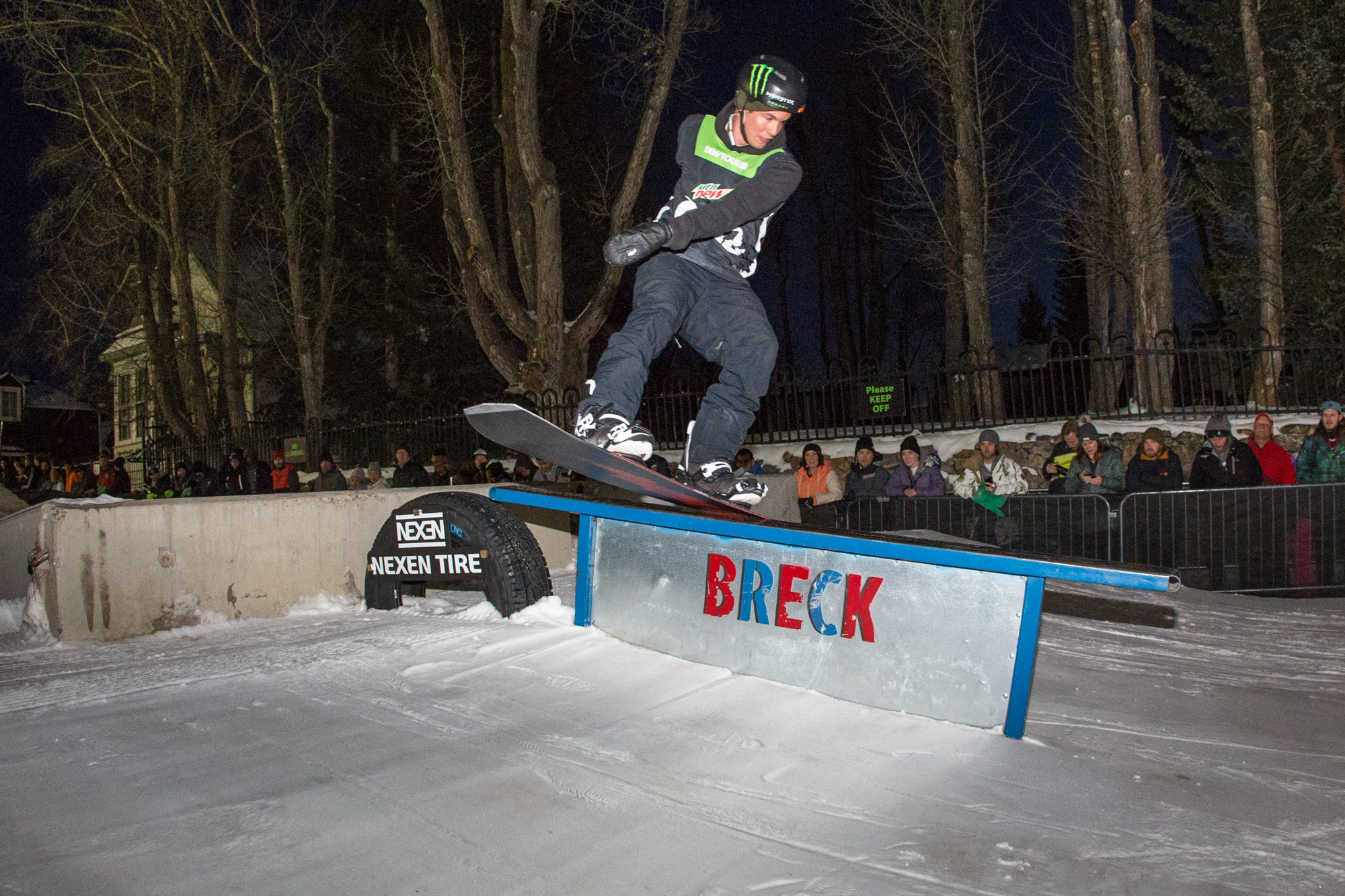 Dew Tour’s snowboard streetstyle took over downtown Breckenridge for the fifth year running, and locals came out in hordes thicker than ever before. Taking on it’s familiar location running down Washington Ave. spanning from Ridge St. and ending on Main St., this year’s event saw the fastest and most well-groomed course to date.

Starting off this years run was a three story tower with a proper snow bank roll-in, which eliminated any concerns of speeds from start to finish. The course also took on a new look with wider take-offs and landings leading int each obstacle, and for the first time the south side of the course was lined with crazed fans as an additional viewing area was carved out.

The course included a giant dumpster to start that allowed for either grinds on the perimeter or a path through its center with a kicker out to a down sloped table to slide. Next was a tabletop jump with four Nexen tires across the to jib which lead into a variety of upward rail, jersey barrier or kicker to set up for clearing a jersey barrier spanning across the top before a down rail was set on the landing. The final two obstacles were a choice of either a long corrugated pipe or up-to-flat rail, which select riders manage to transfer between, before the course ended with a final bank to angled bench running across the top for stalling on in front of the masses.

With easily twice the size of crowd than previous years, Dew Tour had all the elements to keep the athlete and fan energy high between a DJ and local MC, DC, spinning music and keeping the crowd at a steady roar.

The tricks were also next level. Nearly every section offered transfers to grind or gap from multiple obstacles and every possible option was used. Flips out of the dumpster, as seen by Jesse Paul, and endless slides, presses and spins were witnessed. Familiar faces such as Dylan Alito, Jordan Morse and Zak Hale had the fans struggling to keep up with the technical assault.

New faces, too, brought a fresh variety to the event. Drayden Gardner, for example, went cab over a jersey barrier and nose press down the following rail as well as transfer between the corrugated pipe tot he rail at the end of the course.

In the end, though, it was all eyes at Ozzy Henning. Henning slide the length of the dumpster feature into the table, jibbed the jersey barrier multiple ways, one of the most impressive was going from a blunt stall hopping to nose blunt stall before hopping over and onto the down rail.

Henning, a newcomer to Dew Tour Streetstyle, emerged as the overall winner and the winner of Best Trick, for which he was rewarded two trophies and a total of $6,000.

“Streetstyle is amazing!” exclaimed Henning directly following the event. “It is quite possibly the best kind of event—it is like a terrain park in the streets. It’s the kind of thing that every snowboarder would love to do, just go down the street and hit a trashcan, hit some tires and jump some jersey barriers. So fun. Good idea. Love it!”

Making the connection, Brady Lem went from dumpster to picnic table to please the crowd and judges. Photo: Crosland

A look down from the top of the streetstyle drop before the madness ensued. Photo: Crosland

Always a crowd favorite, local ripper Seth Hill found a zone to flip one for the fans. Photo: Crosland

Finding his comfort zone in the air, Rene Rinnekangas hit streetstyle before representing for Rome in the pipe during the Team Challenge. Photo: Crosland

Before he finished second on the night, Brandon Davis finished this frontside boardslide all the way across the opening dumpster feature at streetstyle. Photo: Crosland

Pulling double duty, Brandon Davis warmed up for the slopestyle final with a second place finish in the streetstyle event. Photo: Durso