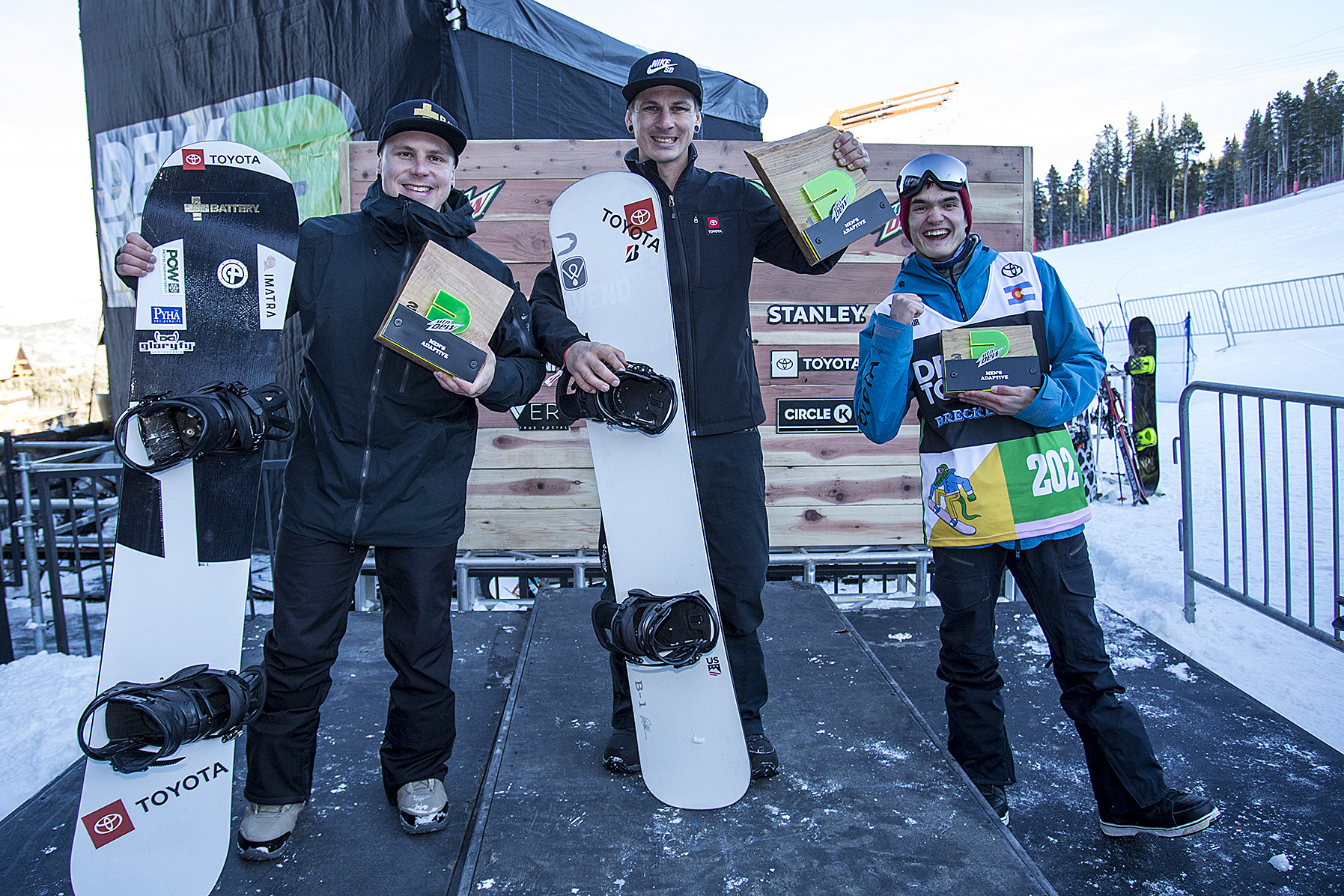 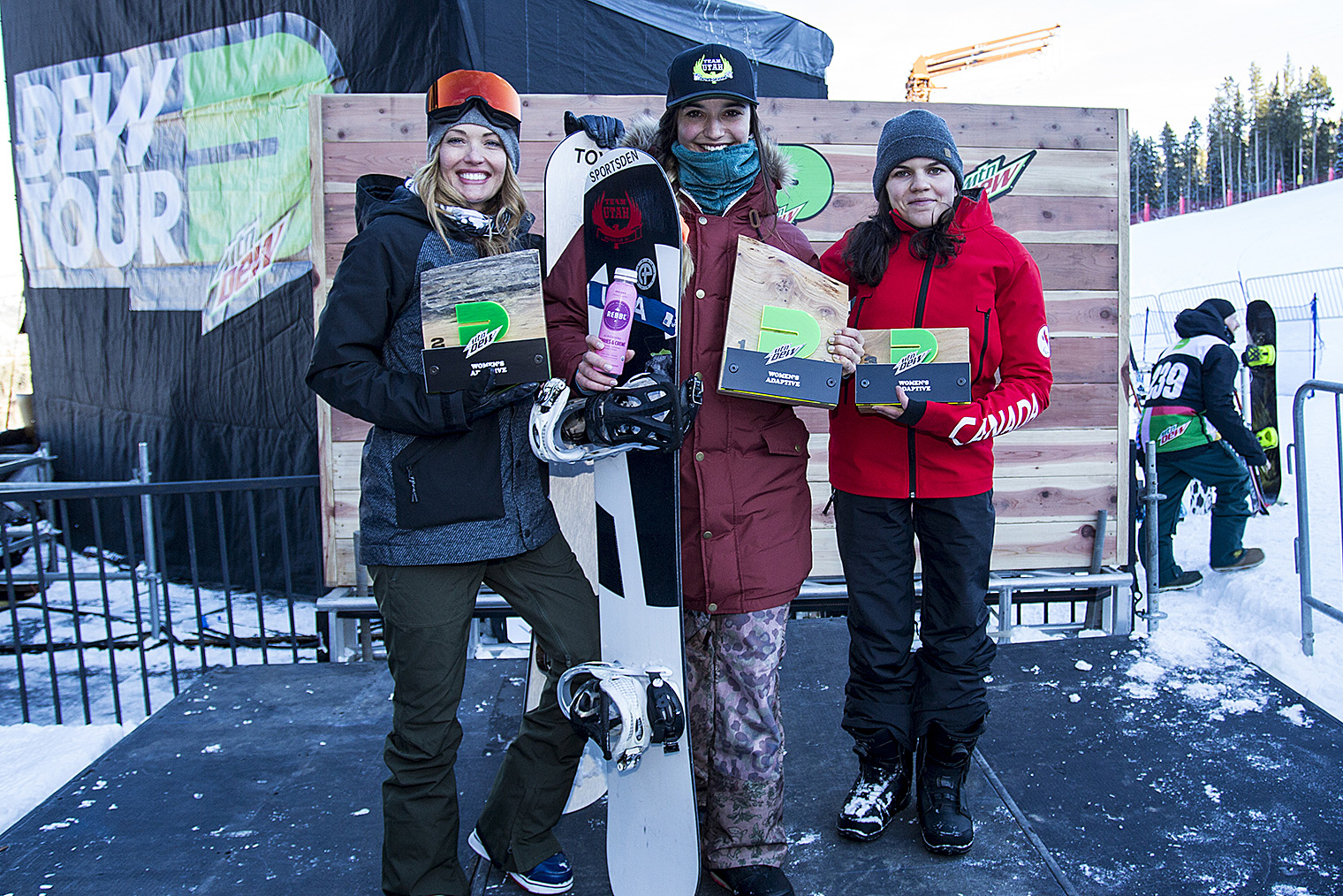 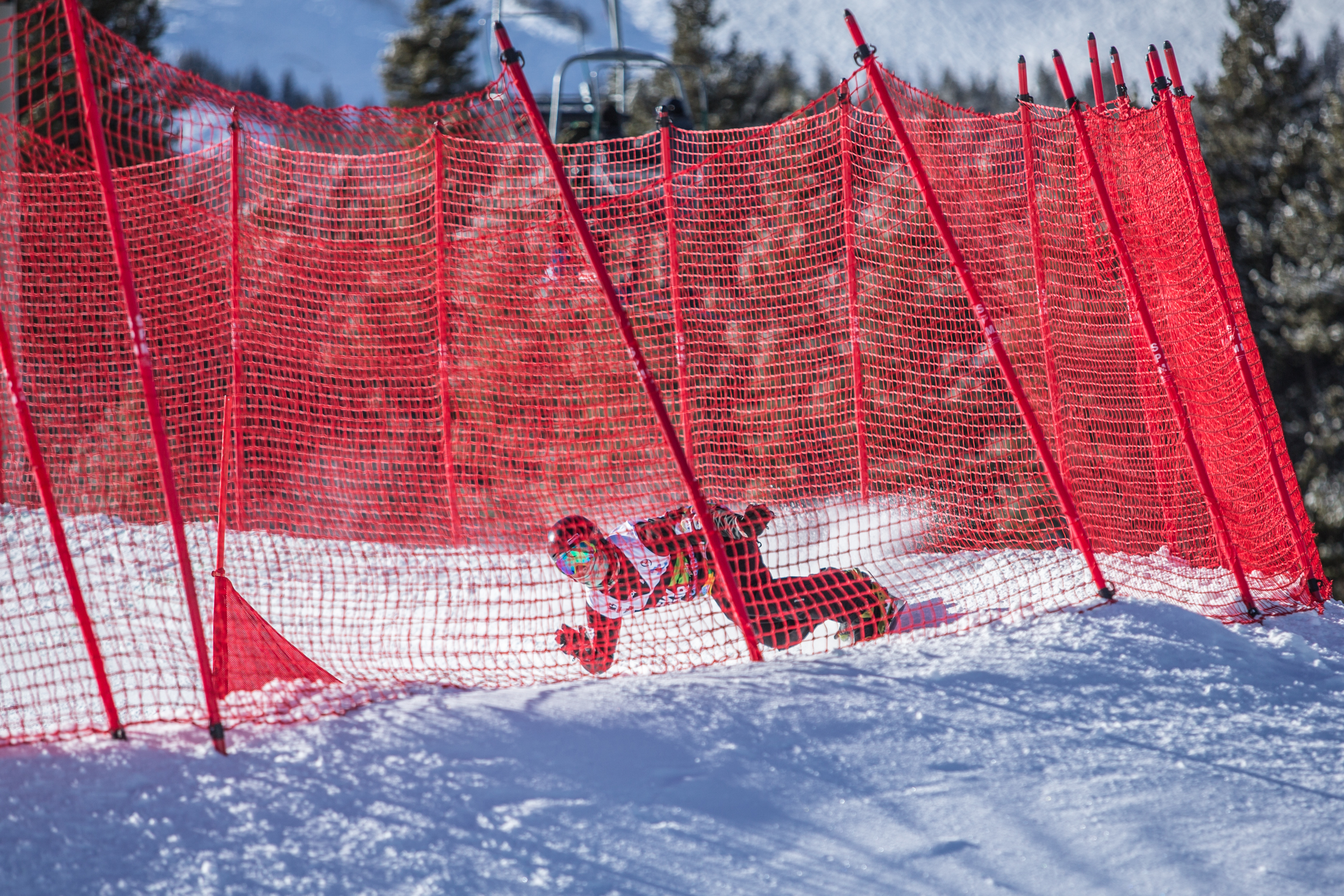 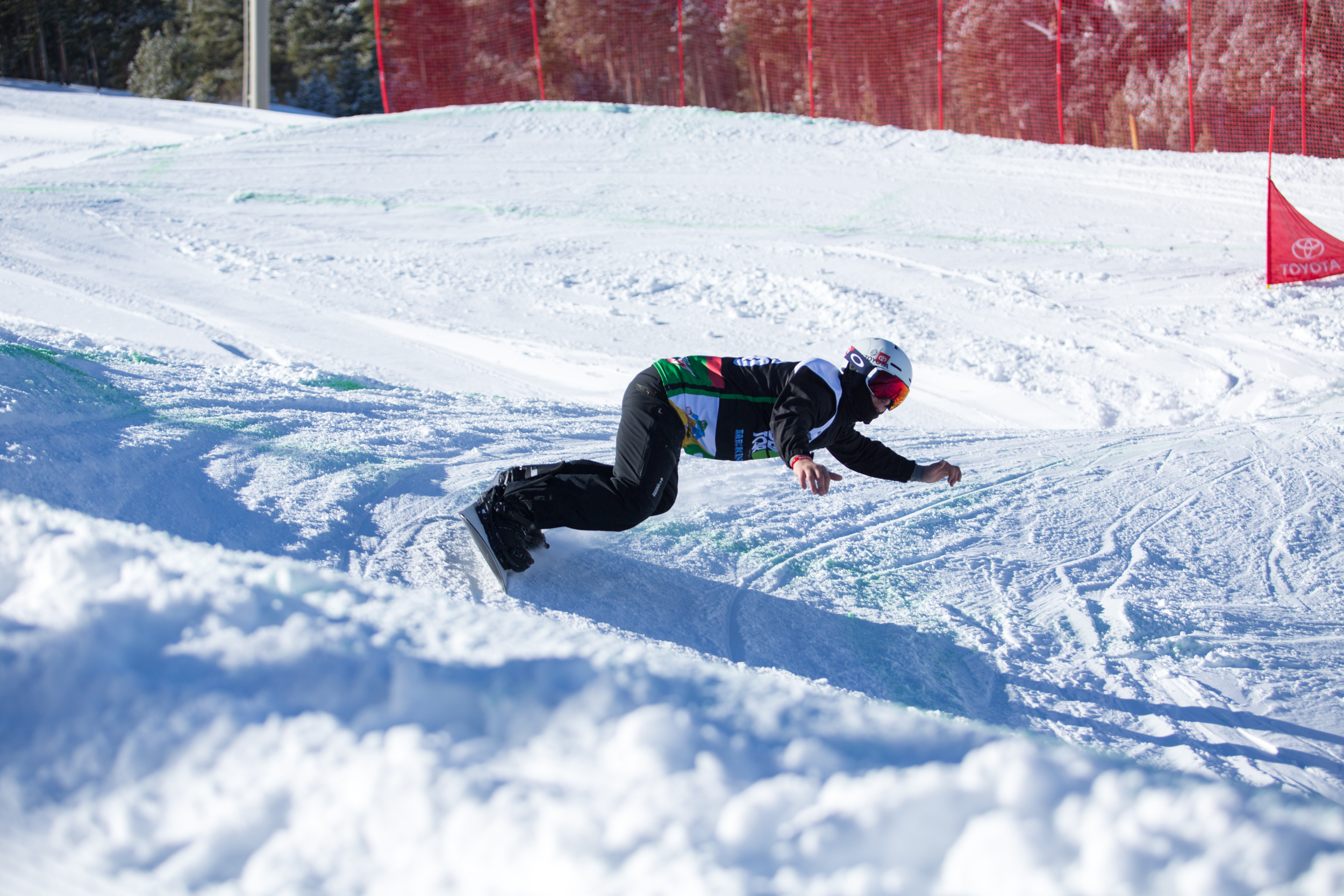 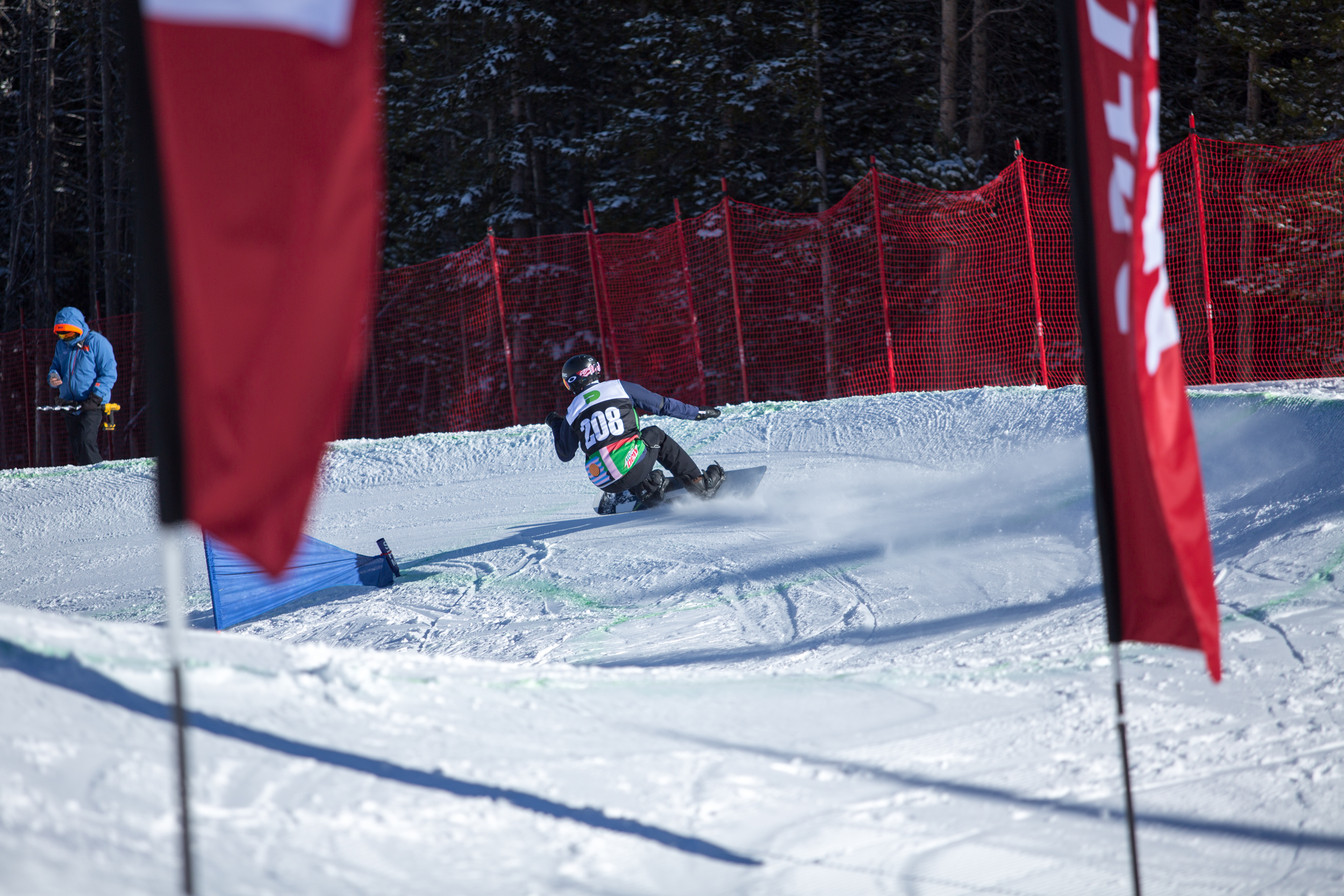 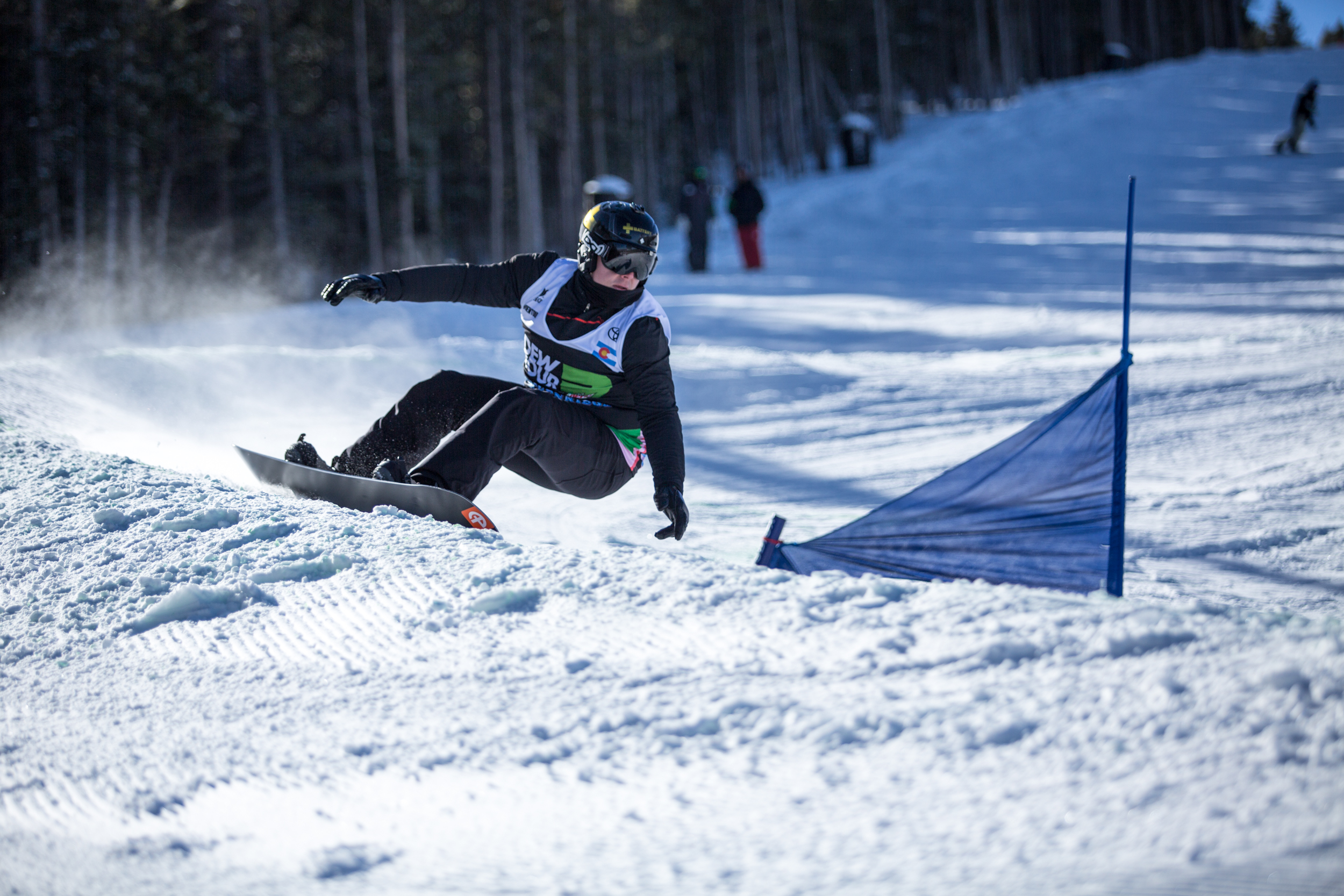 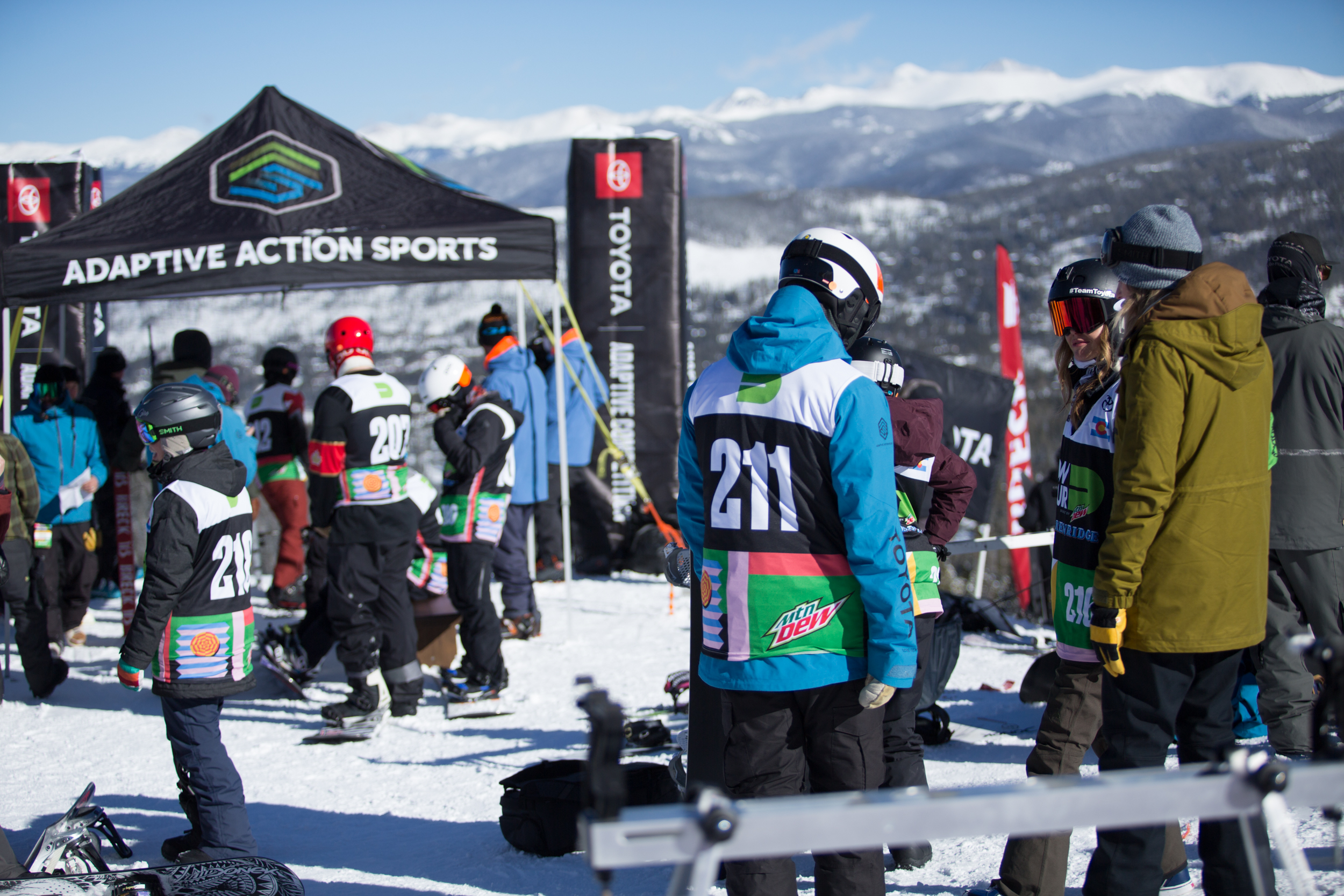 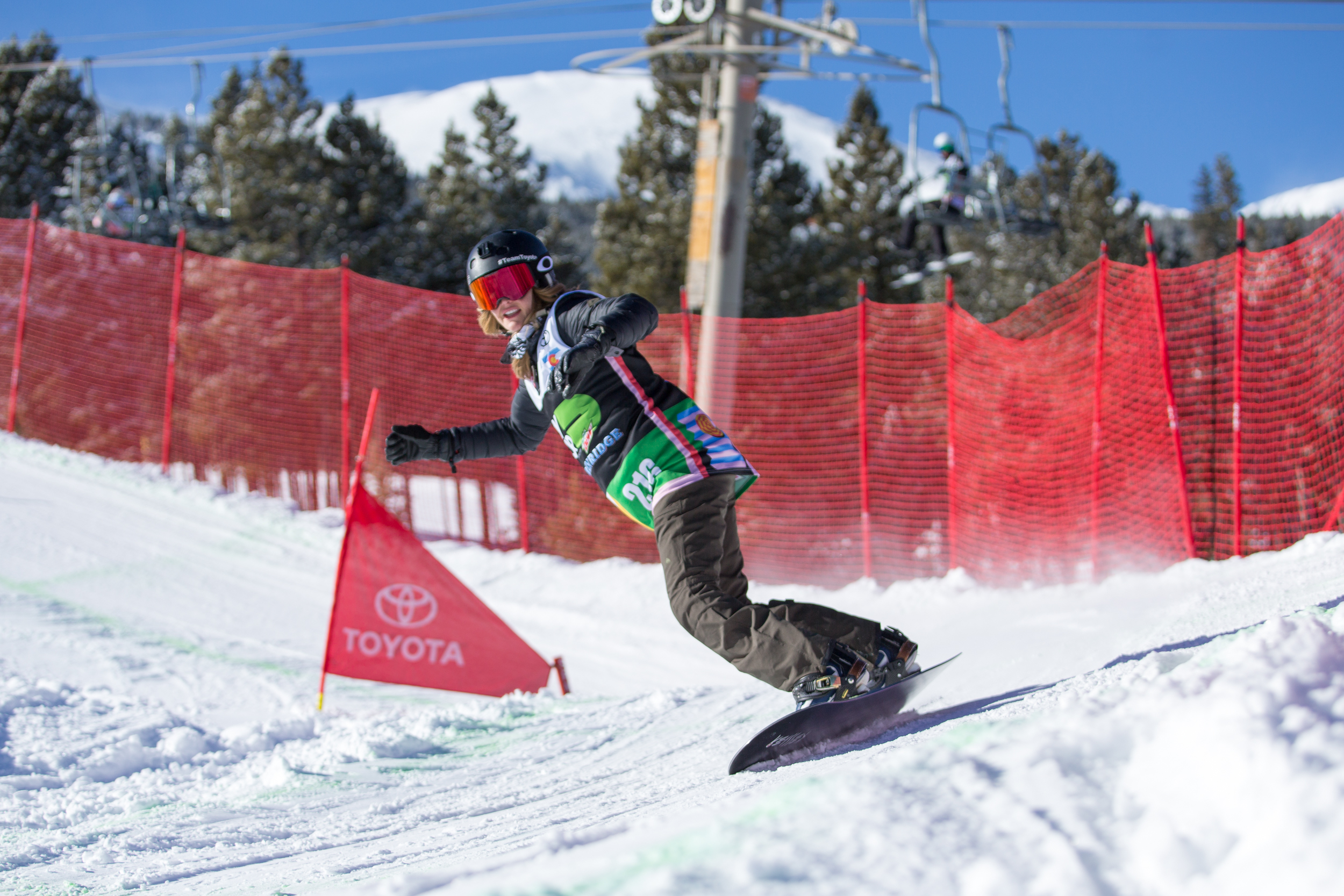 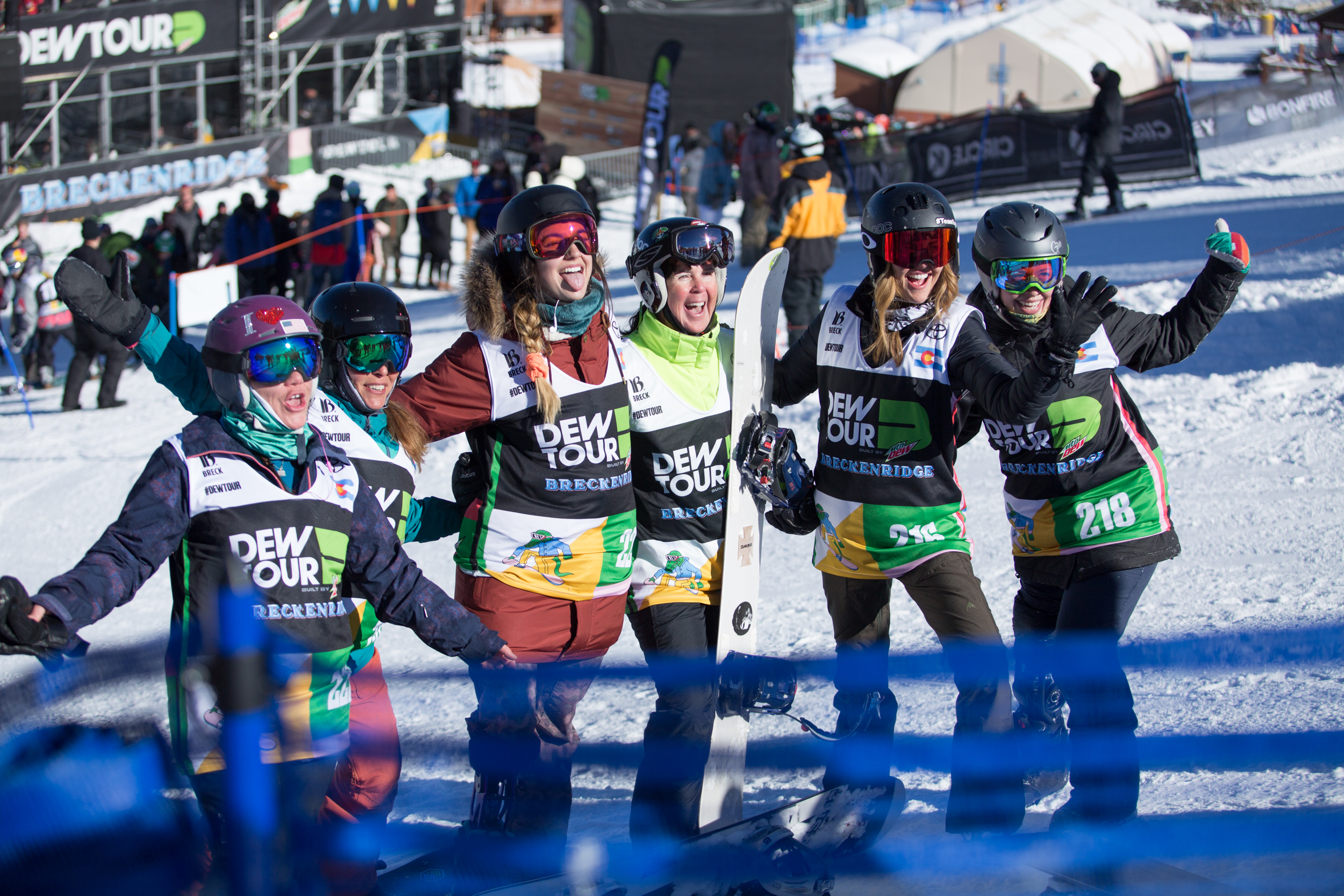 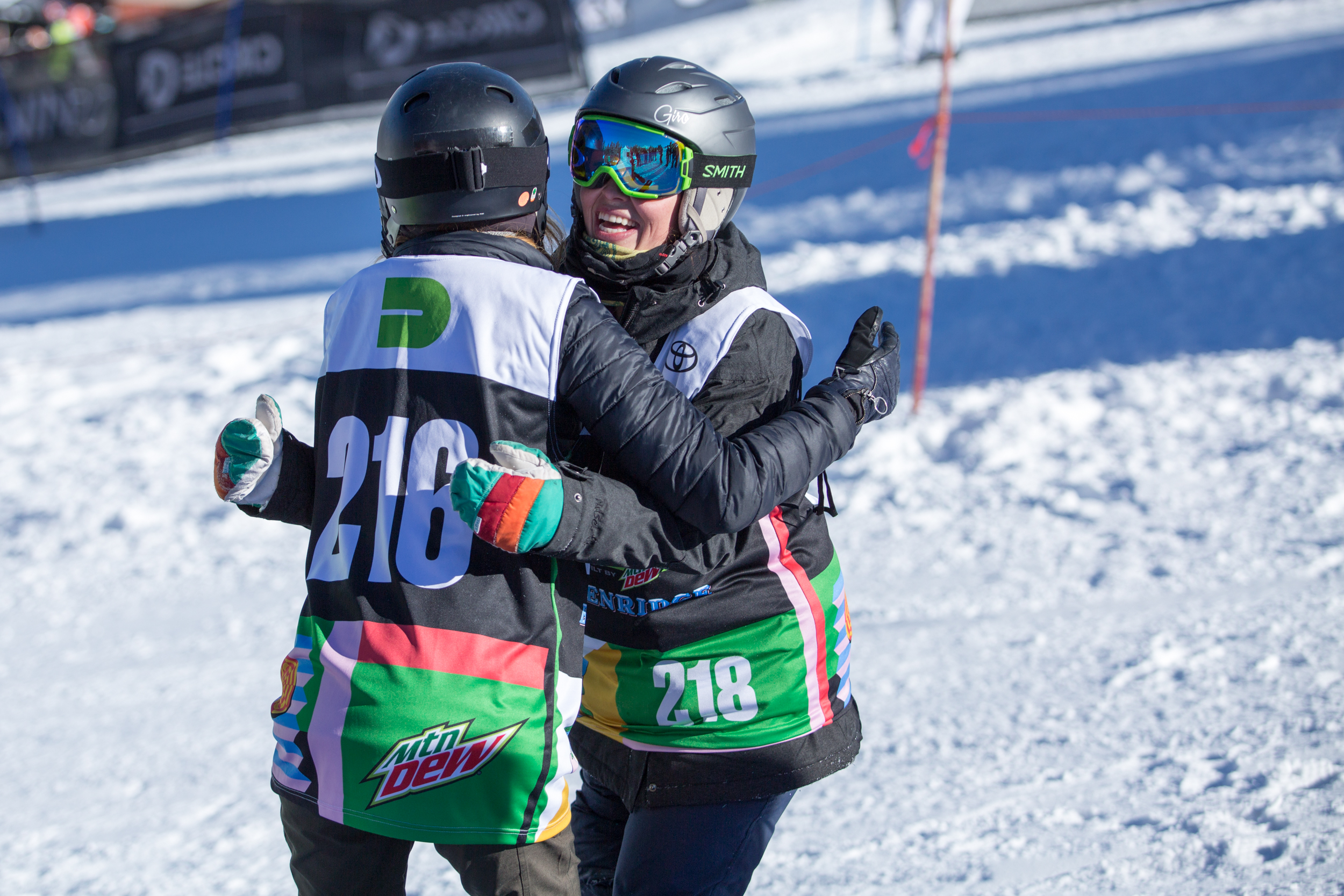 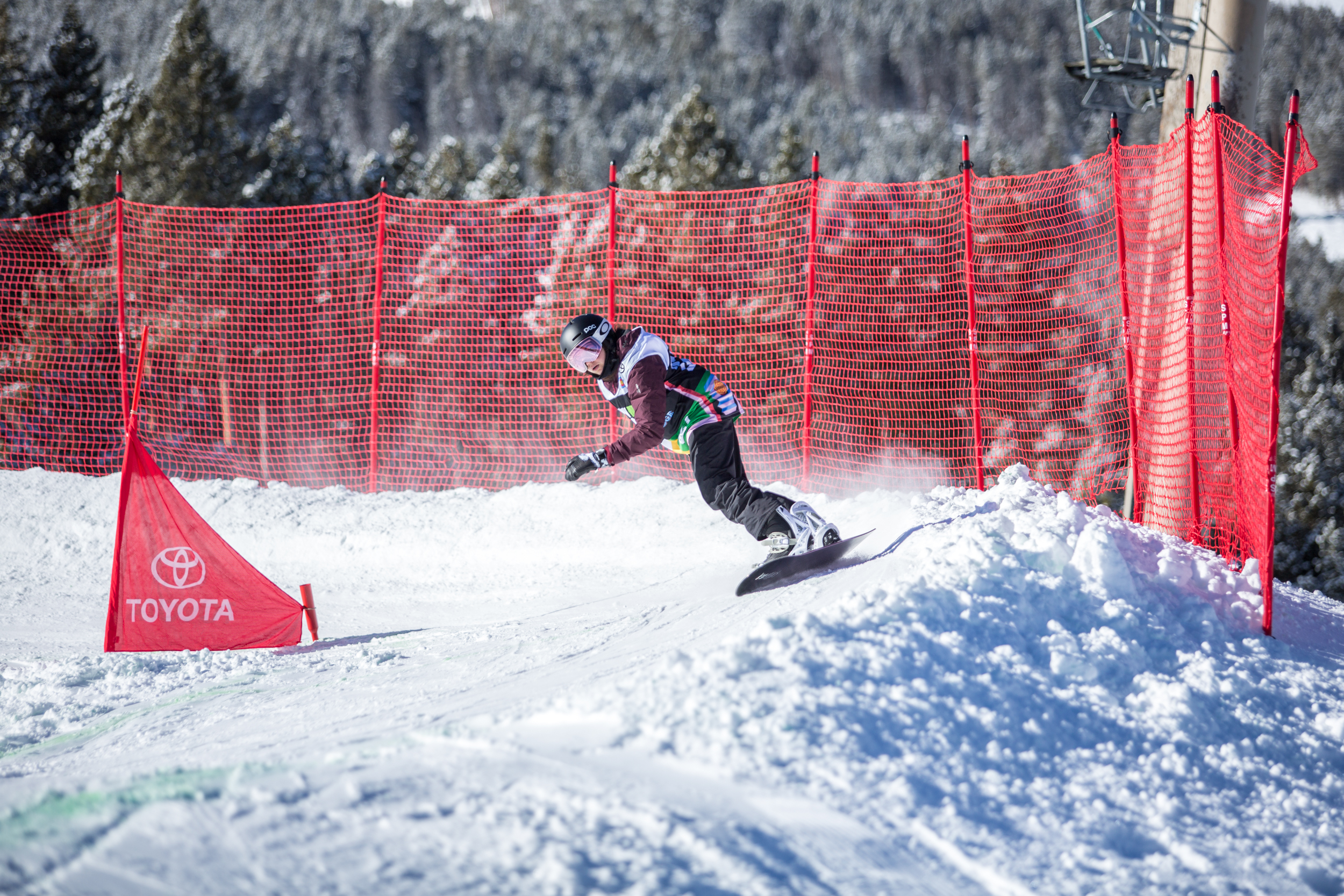 There were some familiar faces at the top of the Adaptive Banked Slalom podium on Thursday as American riders Brenna Huckaby and Evan Strong, the 2017 gold medalists, each took their second consecutive win on Day 1 at Dew Tour 2018.

“Winning Dew Tour last year kickstarted the most incredible year of my life,” says Huckaby, who was featured on the cover of Parents Magazine in January 2018 and in the February 2018 Sports Illustrated swimsuit issue in the months after her 2017 Dew Tour win, then went on to win gold medals at the 2018 PyeongChang Paralympics in both Banked Slalom and Snowboardcross.

Huckaby rides with an above-the-knee prosthetic on her right leg, after losing the limb to osteosarcoma cancer in 2010.

“It feels amazing to be back here with another win and to feel so strong in my riding, just enjoying the ride, literally,” she says. “This is all so surreal. I grew up in Louisiana and never even thought about trying snowboarding before I lost my leg, so to be having all this success and doing all these interviews and photo shoots… it’s bizarre! I can’t wrap my head around it all, to this day.”

Purdy, Thursday’s silver medalist, is a co-founder of the Adaptive Action Sports group that has co-presented the Adaptive Banked Slalom event at Dew Tour for the last three years in partnership with Toyota. She says events like the Dew Tour that feature adaptive athletes alongside able-bodied athletes are all about breaking down barriers and expanding the platform for adaptive riders to showcase their abilities.

“It’s been a tremendous opportunity for us to introduce more people to adaptive snowboarding here in Breckenridge so that we’re able to show more people what the possibilities are and show off our abilities,” Purdy says. “It’s giving us such a great platform to share our sport and help grow adaptive snowboarding. I’m stoked to finish on the podium: it’s great to come here and represent!”

Evan Strong, the men’s gold medalist, says Dew Tour will be his only adaptive race of the 2018-2019 season: after a busy Paralympics season in 2018 he’s taking a sabbatical from both the U.S. team and the International Paralympic Committee (IPC) World Cup racing circuit.

“I’m going to try racing in the able-bodied classes this year for the first time, beginning with a NorAm race in January, but I’m super pumped to come out and win Dew Tour again and hold my title here this week,” Strong says. “This event is important to me because it’s now the only event showcasing adaptive riders alongside all the rest of the best snowboarding pros in the world.”

In addition to racing against able-bodied athletes in 2019, Strong – whose left leg was amputated below the knee after a motorcycle accident in 2004 – says he’s making it a personal priority to help bring both skateboarding and surfing into the Paralympics movement. Both sports will make their Olympic debut in Tokyo in 2020.

The gates at the top of the banked slalom were packed with excited athletes. Photo: Durso

Smiles all around at the finish line. Photo: Durso