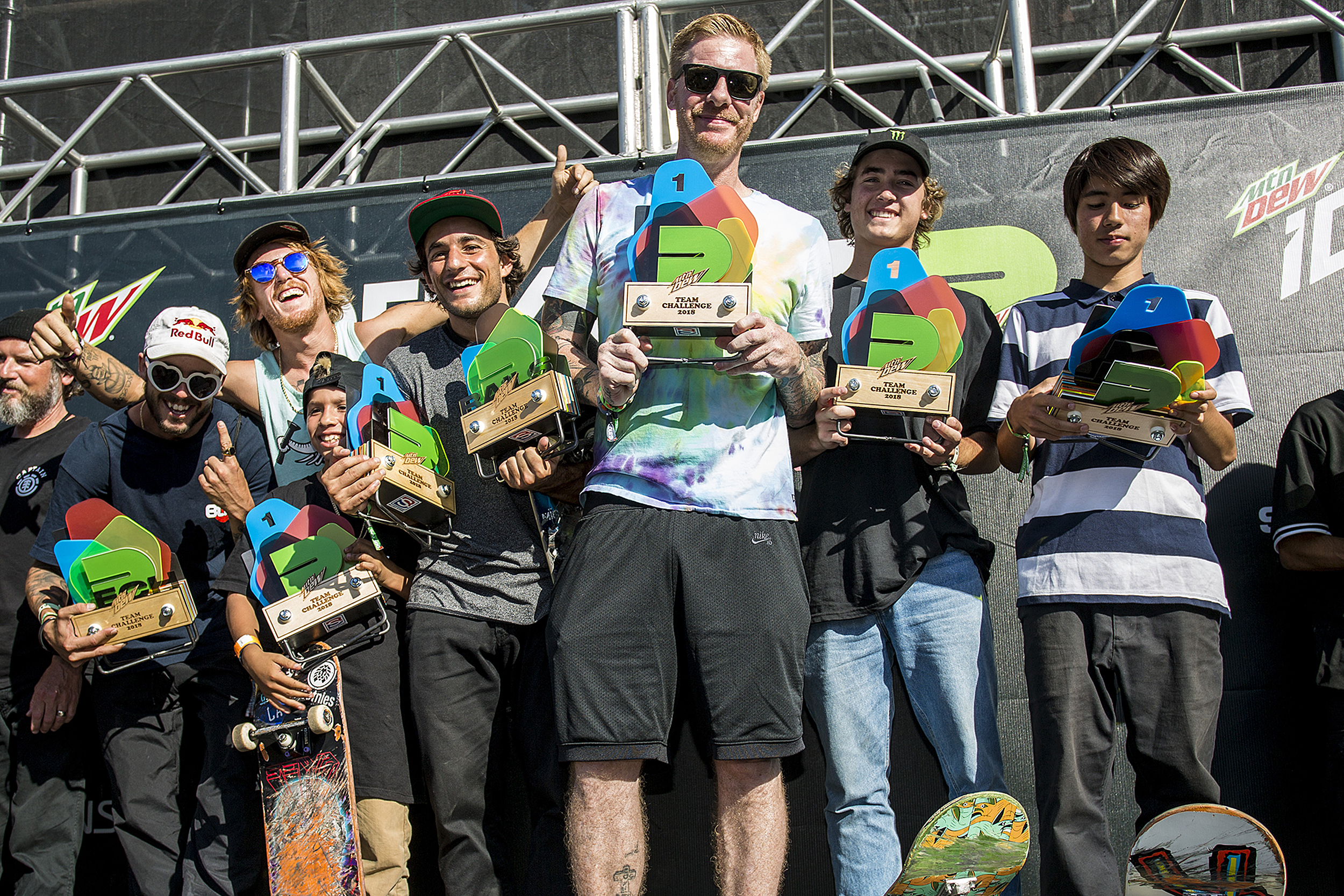 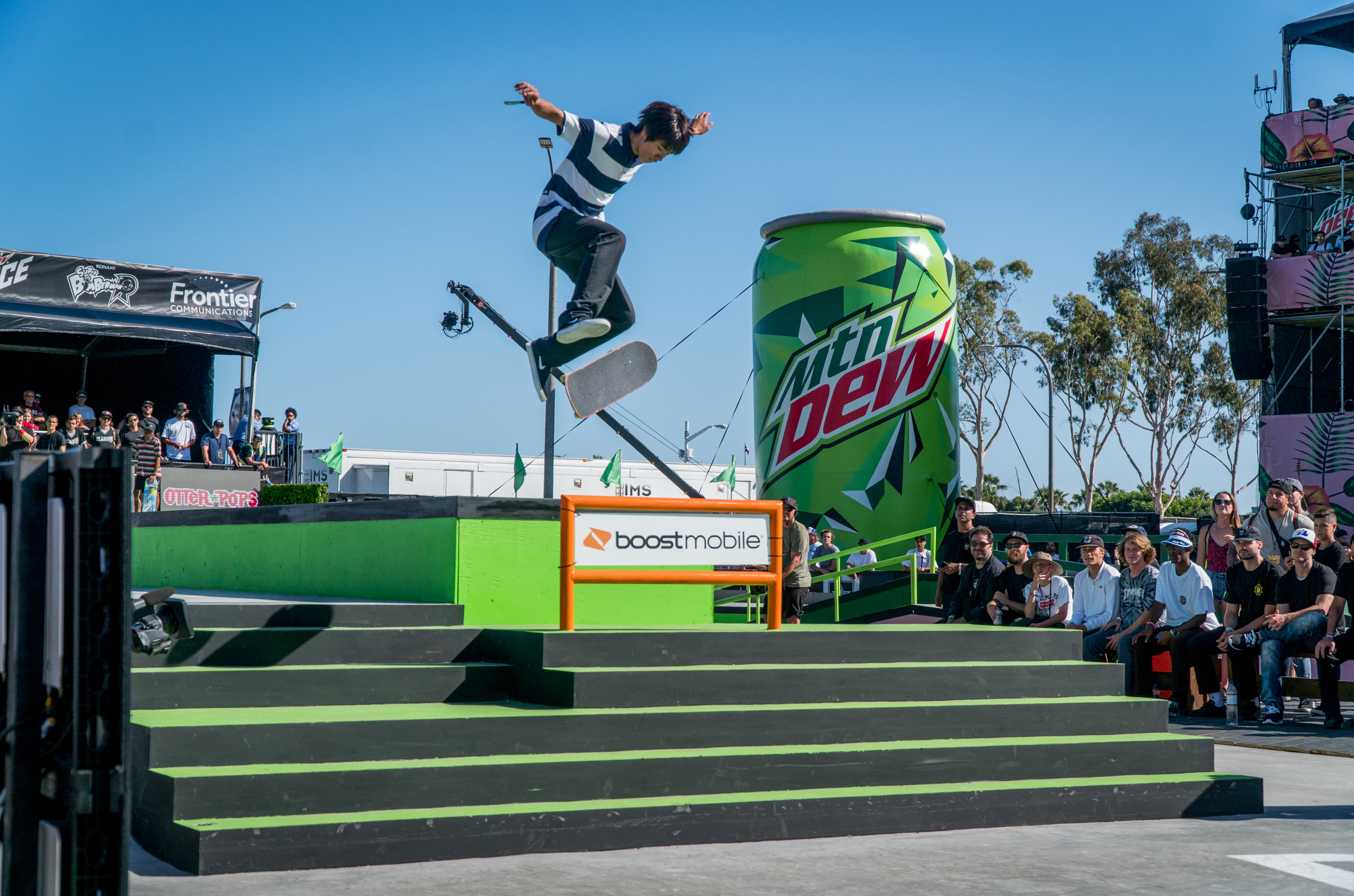 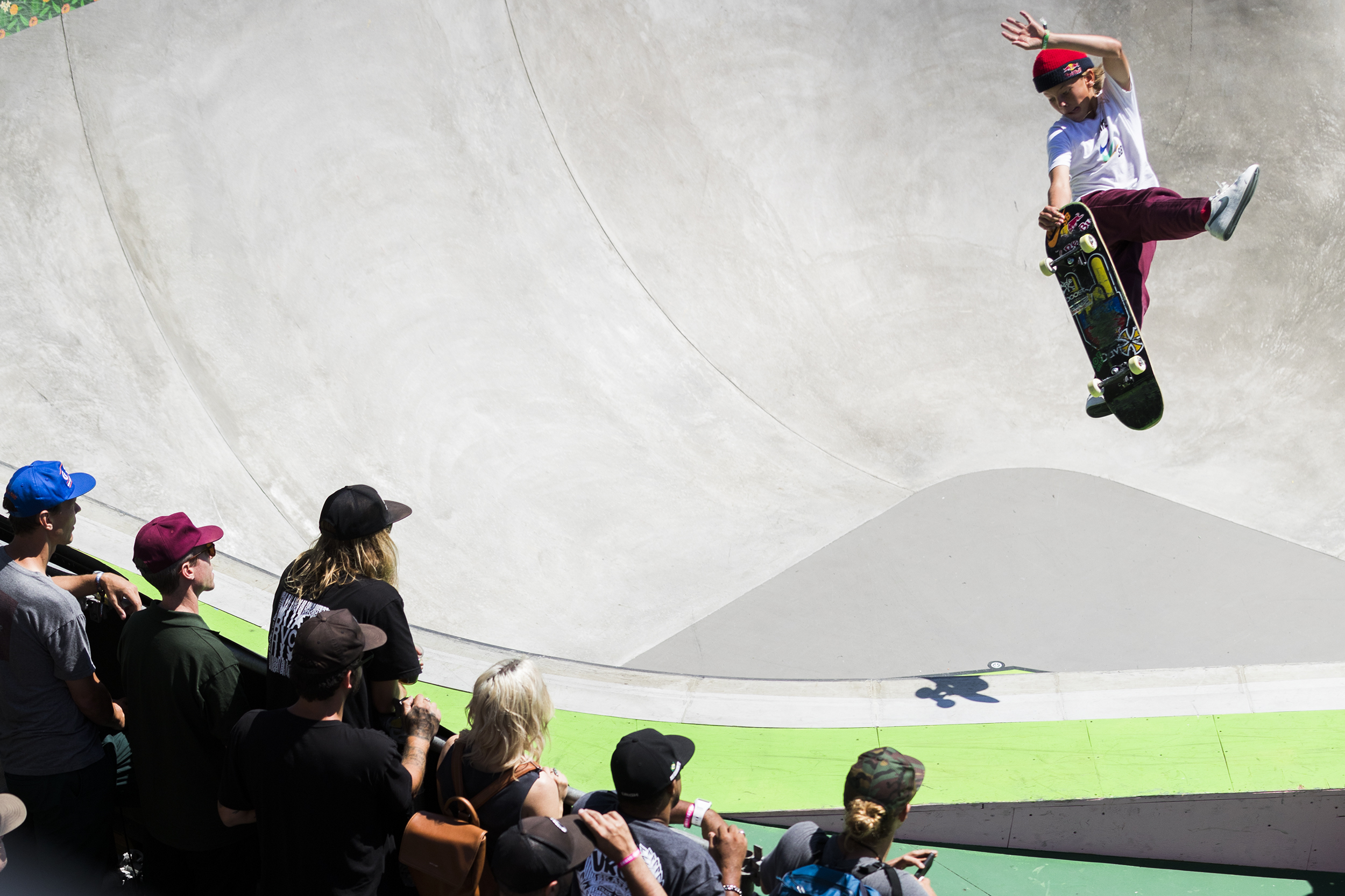 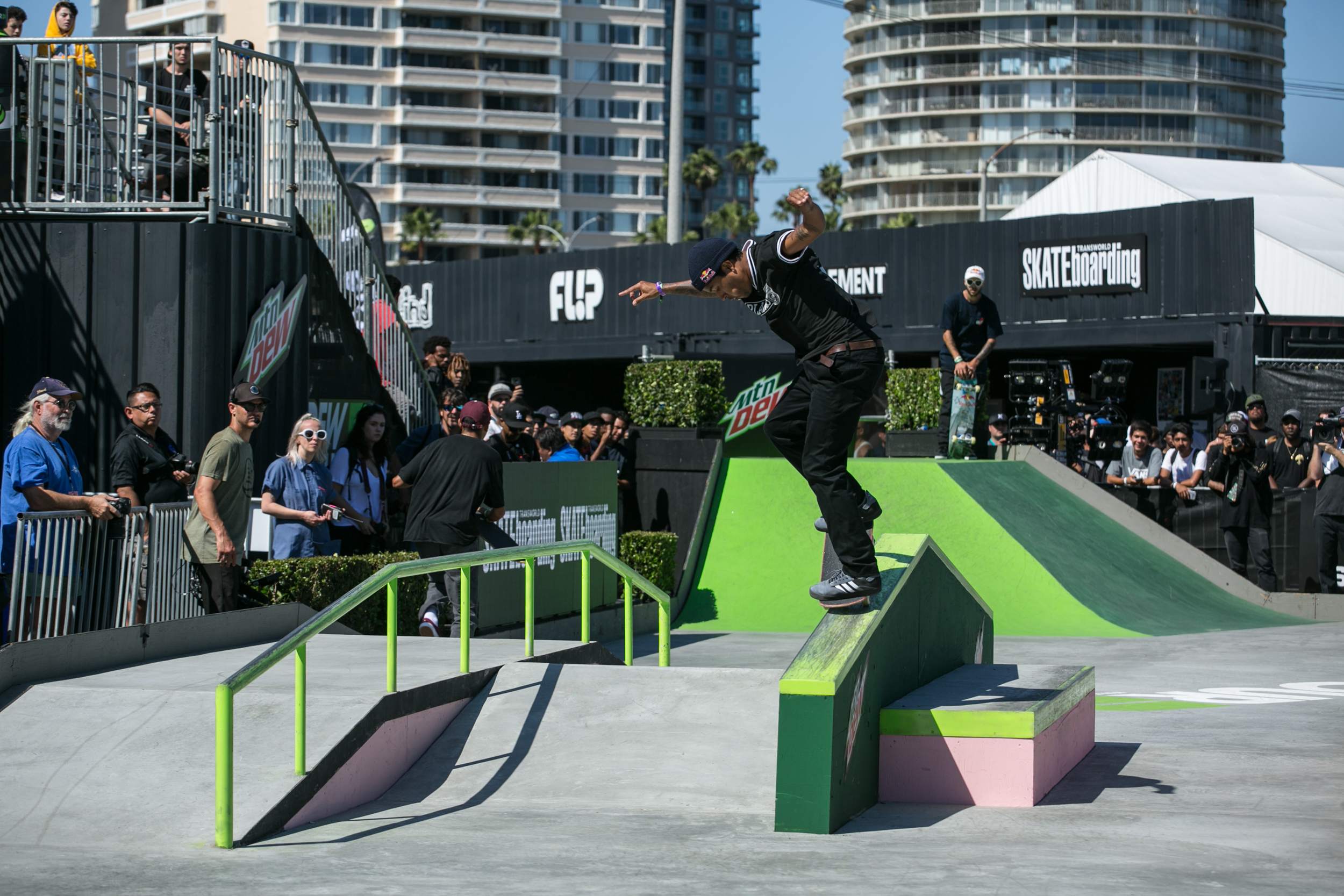 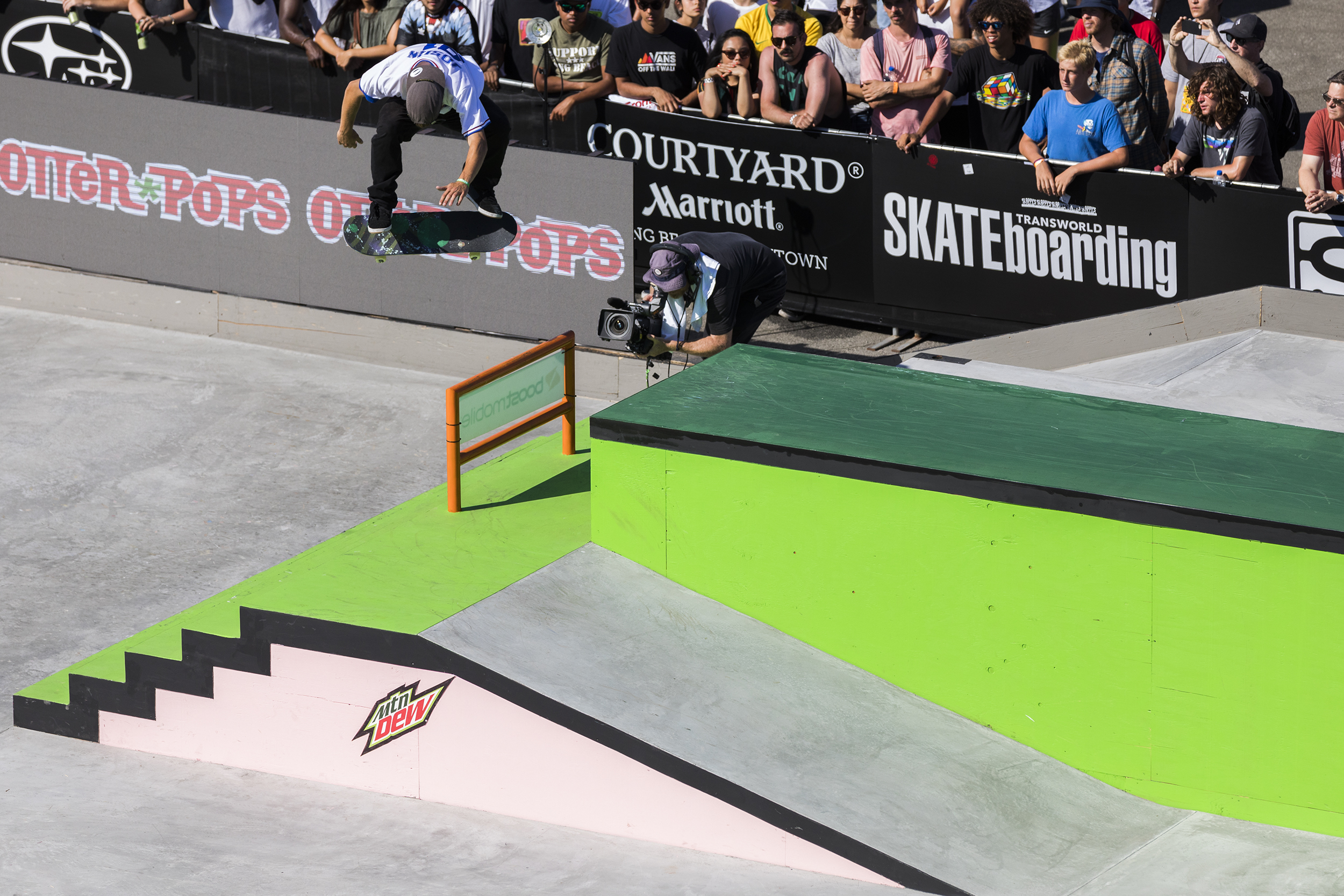 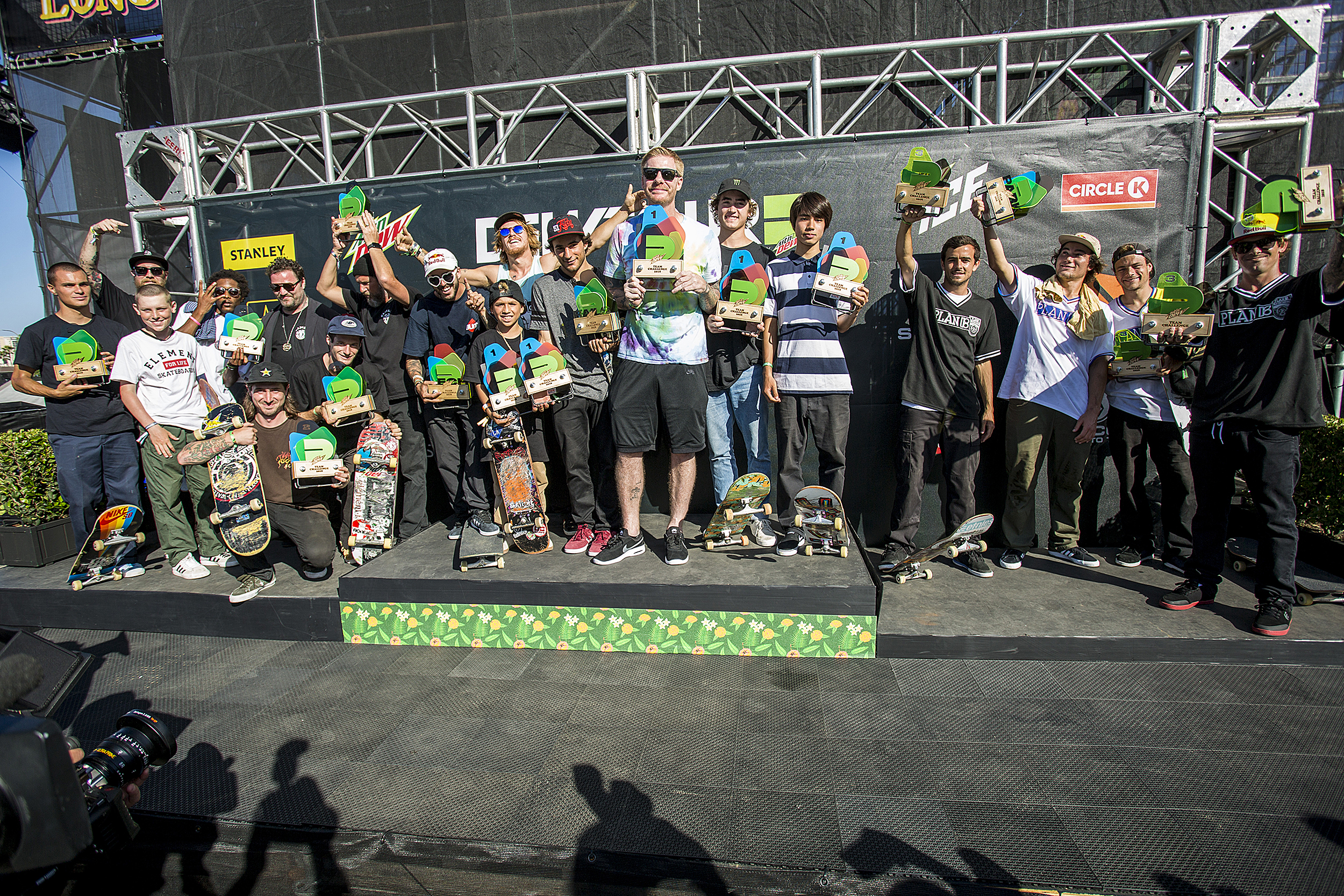 Imagine constantly bumping shoulders with your childhood skateboarding icons. First you see Andrew Reynolds on the deck of the bowl, then you walk past Mark Gonzales on the stairs and eventually you realize Ryan Sheckler, Chris Cole, Mike Carroll, Rick Howard, Nyjah Huston and just about every heavy hitter is hanging out around the venue. Later, in the middle of an event you see Chad Muska run over and hug Bam Margera, and a little later Chris Joslin’s board fly’s off course and into the hands of Danny Way. That is exactly what happened on Saturday at Dew Tour Long Beach 2018.

For the third year running, the Skate Team Challenge presented by TransWorld SKATEboarding worked it’s Southern Californian magic, and lured out almost every infamous skateboarder you could dream up cheering on the action. While six teams made up of various riders to compete in the Park, Tech, Rails and Gaps sections all congregated with their Team Captains, the grandstands and surround areas packed in easily three times the fans as seen the day before.

First to compete were the Park reps. For 20 minutes, the six skaters went non-stop in an organized jam format with their runs maxing out at 30 seconds. For some, maxing out the run was never an issue while others felt less prepared and slightly out of their element.

“I’m more of a rails kind of street skater, so skating with these guys who are such heavy hitters in transition is kind of scary. But, it is also really cool and motivating,” explained Tre Williams, riding for Primitive. “I came in here to skate with them and they showed love.” When asked if he would do it again he said, “Oh, yeah! Except next year I’m going to actually practice—hah!”

Riding for the two-time defending champs (bLind Skateboards) was Trey Wood, who was actually recovering from food poisoning the day before and having a bit of a rough go himself. He also mentioned that being first to skate for his team and set that score was not helping.

“I tried my best. Yesterday, I was throwing up all day, not feeling the best with stomach issues. So, today I did what I could,” explained Wood walking the venue after his portion of the event had passed. “But I have  sick team! I’m sure we could still, possibly pull through.”

Keegan Palmer, riding for FL!P Skateboards, was on the other side of things ripping every run the buzzer kicked him out. Palmer put down a tight line with a alley-oop 270 from small to deep end straight into a 540, and that same small section would later see a nosegrind fakie. Keegan also threw a big backside indy all the way over the Stanely wall feature, and he managed a sugarcane on the biggest quarter pipe in the parks center.

“I’m feeling great! I was just having fun skating with all the homies,” said Palmer between catching his breathe after skating. “Hopefully Team FL!P goes through to win it for the boys. I’m fucking stoked!”

15-year-old Palmer finished with the second best score in the park, only being bested by Plan  B’s Alex Sorgente. Going into the tech section it was Plan B’s Alex Sorgente with the top score for himself in the section and his team to be leading with FL!P close behind. For the Tech, Rails and Gap sections the organized jams were reduced to 10-minutes with each skater allowed to go both directions on the given course each time they dropped in.

However, when it comes to the tech section everyone can count on TJ Rogers. For the third year in a row, Rogers reigned down incredibly tech combinations like kickflip manual to noseslide to bigspin out, and slightly gnarlier combinations like the kickflip to crooked grind on the A-frame hubba.

“There is pressure for sure. You don’t want to let your team down,” started Rogers, explaining his mindset going into the heat. “It’s a little different, but not really. We are trying to defend our title the same as last year, but this time we are motivated to get that hat trick, that three-peat!”

Still, going up against Felipe Gustavo for Plan B means that there are about to be a lot of 360 flip nosegrinds and variations. Since Gustavo also came in strong during the tech heat, Plan B continued to lead at the end of the Tech section. FL!P continued to maintain second, but bLind was able to overcome Element and jump into third going into the rails.

When you think of the past two years on the rails course you realize that bLinds Micky Pappa has had the same success. Pappa has won the rails section outright each year and, as seen during Friday’s Street Qualifier, he was definitely digging this year’s course. Pappa pulled off a big kickflip front boardslide early on in the jam, later in the jam he rode out a front feeble through the down to flat kink, and he also landed big collie front feeble.

Though the Girl Skateboards team had been struggling to get high scores on the leader board there was no shortage of creative talent. On the Rails section the Girl squad sent Niels Bennett, who not only struggled but also impressed. Chad Muska was so impressed he hopped up to give Neils a dab right in the middle of his run after he bailed. Niels did, however, manage a smith pop-out on the down rail before it kinked to flat.

Niels ended the Rails section in last, which translated to Girl ultimately seated last and dropping in first on the final sections of Gaps. With Pappa pulling thru his own hat trick in the Rails section, the top three going into the final Gaps section would be bLind in the lead for the first time but not without Plan B right on their heels and the wolverine waiting patiently to jump.

“I’m just going to be out here having fun. It’s another day in paradise,” said Chris Joslin just before his heat began. He certainly did not look to be feeling any pressure as it came down to the wire. What did get him a bit worked up, though.

“Every time I go a contest like this I spend almost a days worth of time fanning out on all the fucking pros. It’s amazing, I love it.” — Chris Joslin

With his team at his back, Joslin tore the gaps apart. He started off hot with a 360 going up to the top before spinning a back bigspin over the Boost Bar, and as the event came to a close he was stomping a gigantic backside 360 kickflip off and over one of the ramp sections to flat. Similarly, bLind’s Yuto Horigome landed a frontside 360 over that  same section after first landing a backside 360 over the Boot Bar and stairs.

The real hero of the Gaps section turned out to be Mason Silva skating for Element. Silva was throwing down throughout the entire jam. He landed 360s both direction over the kicker sections, a full cab, big spin and hardflip over the Boost Bar, and even a grind to gap out over the stairs. Silva took the Gap section win, to even his own surprise.

“I thought Joslin was going to beat me,” laughed Silva after it was all said and done. “That was gnarly.” Silva also expressed how hyped he was on the overall day. “I love the Team Challenge. It gets everyone together, you root for your friends. And, I was not expecting to see Bam Margera or Chad Muska. I’ve never met Chad, and it is really sick to see them both here.”

Muska was briefly asked on the mic just before the Gaps got underway saying how excellent it was to be at Dew Tour watching such great skateboarding and that he had faith Element could come through in the Gaps.

In the end, once every score was thoroughly tallied, it was bLind Skateboard doing it once again. The three-peat, the hat trick, the underdogs in their own title defending event—bLind Skateboards won the Team Challenge presented by TransWorld SKATEboarding for the third year running.

“This one was tough!” sighed Bill Weiss, bLind Team Captain, with great relief. “Trey had food poisoning, I didn’t even think he was going to skate… but he fucking went for it.  We were trailing all the way, it’s just hard. All these teams, all these guys that are skating are just so good. You never know.”

When asked if bLind plans to keep on rolling with into the fourth year, Weiss laughed and replied, “why not?” When asked if he was sweating it during the Gaps section he answered, “100 percent!”

The entire bLind Skateboards crew that showed up to Dew Tour to skate and to support the homies. Congrats on the third consecutive win in the Team Challenge presented by TransWorld Skateboarding. Photo: Ortiz

Keegan Palmer sending a judo frontside in the deep end for the FL!P crew. Palmer took 2nd in the Park section to give FL!P their fighting chance. Photo: Strand

Putting his switch foot forward, Felipe did what he had to in order to keep Plan B in the lead following the Tech section. Photo: Durso

This backside big spin over the Boost Bar was the first trick Chris Joslin rifled off in the Gaps section, and his last trick was arguably the best of the event. Photo: Strand

The top three finishing teams (bLind in 1st, Element in 2nd, and Plan B in 3rd) all together after receiving their awards. Photo: Ortiz

The entire bLind Skateboards crew that showed up to Dew Tour to skate and to support the homies. Congrats on the third consecutive win in the Team Challenge presented by TransWorld Skateboarding. Photo: Ortiz
The silent assassin, Yuto Horigome 360 flipped his way into another Dew Tour Team
Challenge victory for the bLind Skateboards squad. Photo: Saxon
Keegan Palmer sending a judo frontside in the deep end for the FL!P crew. Palmer took 2nd in the Park section to give FL!P their fighting chance. Photo: Strand
Putting his switch foot forward, Felipe did what he had to in order to keep Plan B in the lead following the Tech section. Photo: Durso
This backside big spin over the Boost Bar was the first trick Chris Joslin rifled off in the Gaps section, and his last trick was arguably the best of the event. Photo: Strand
The top three finishing teams (bLind in 1st, Element in 2nd, and Plan B in 3rd) all together after receiving their awards. Photo: Ortiz