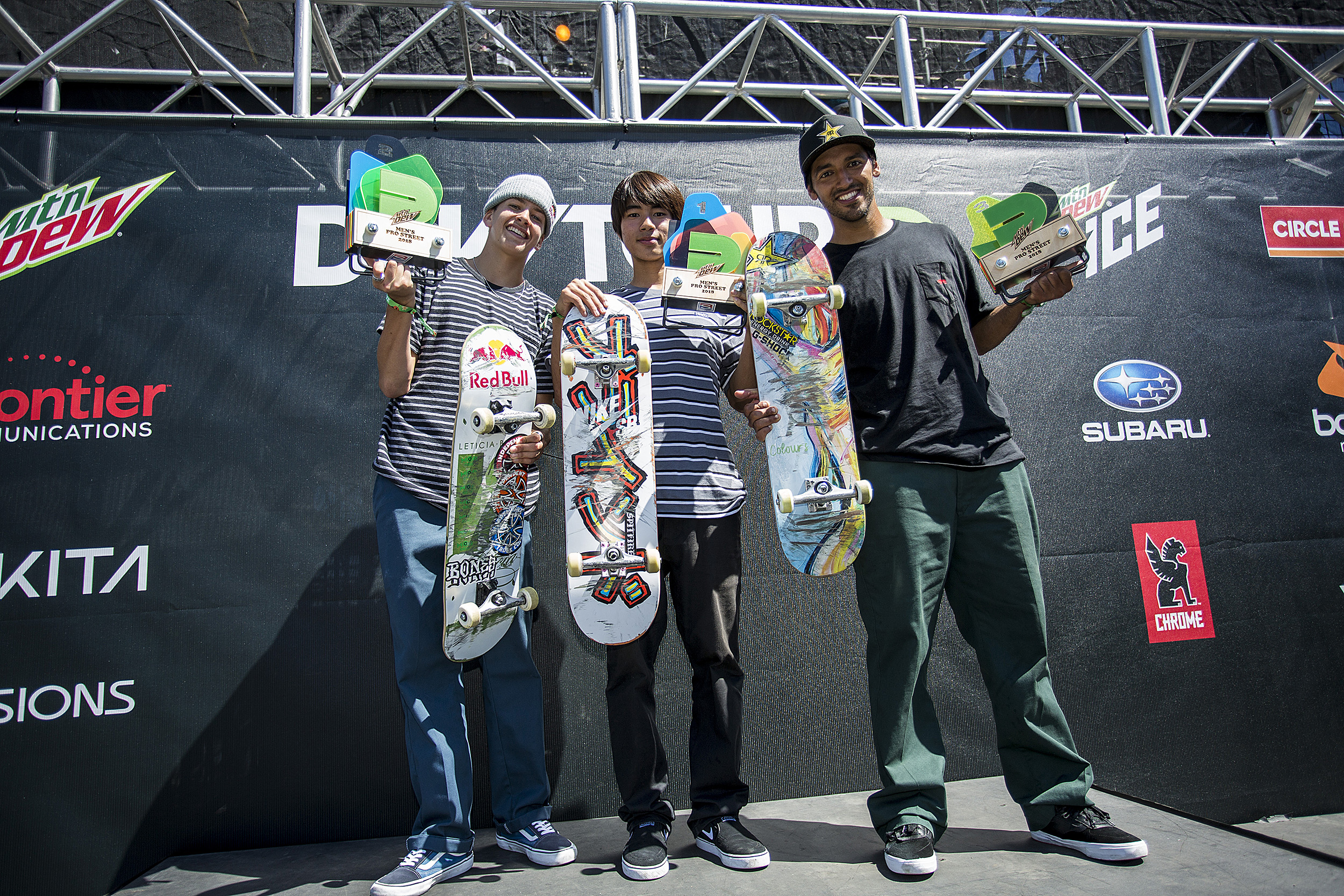 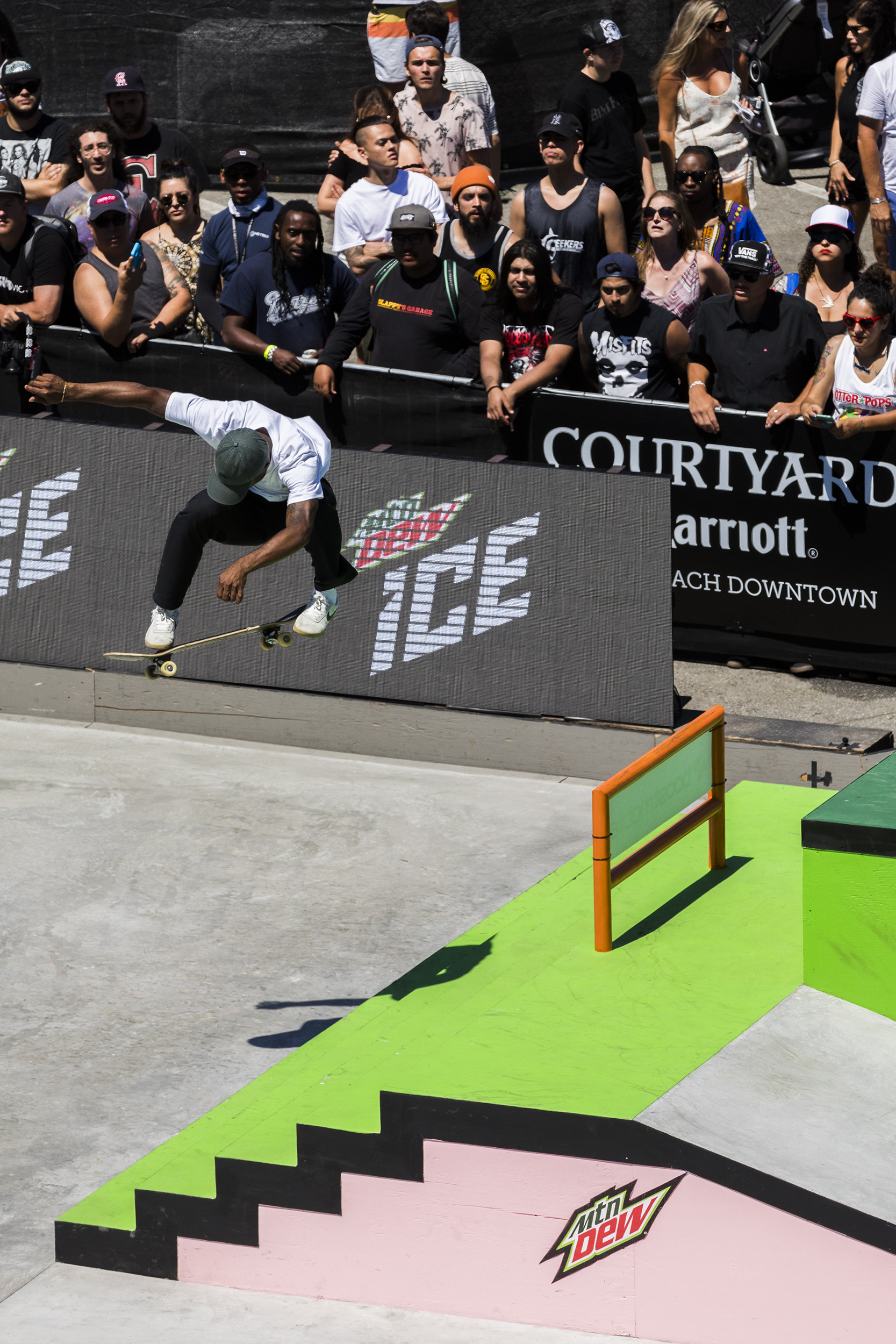 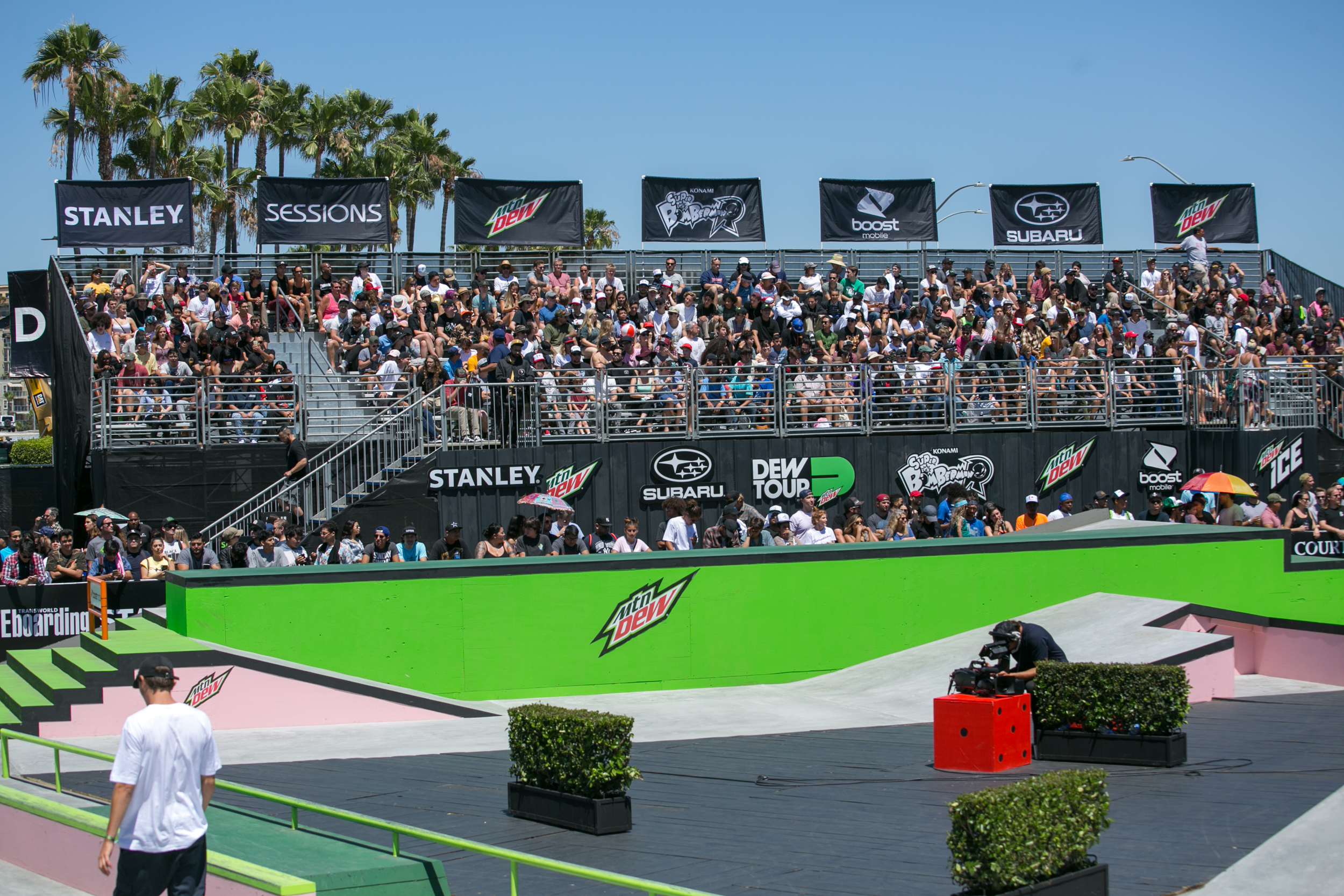 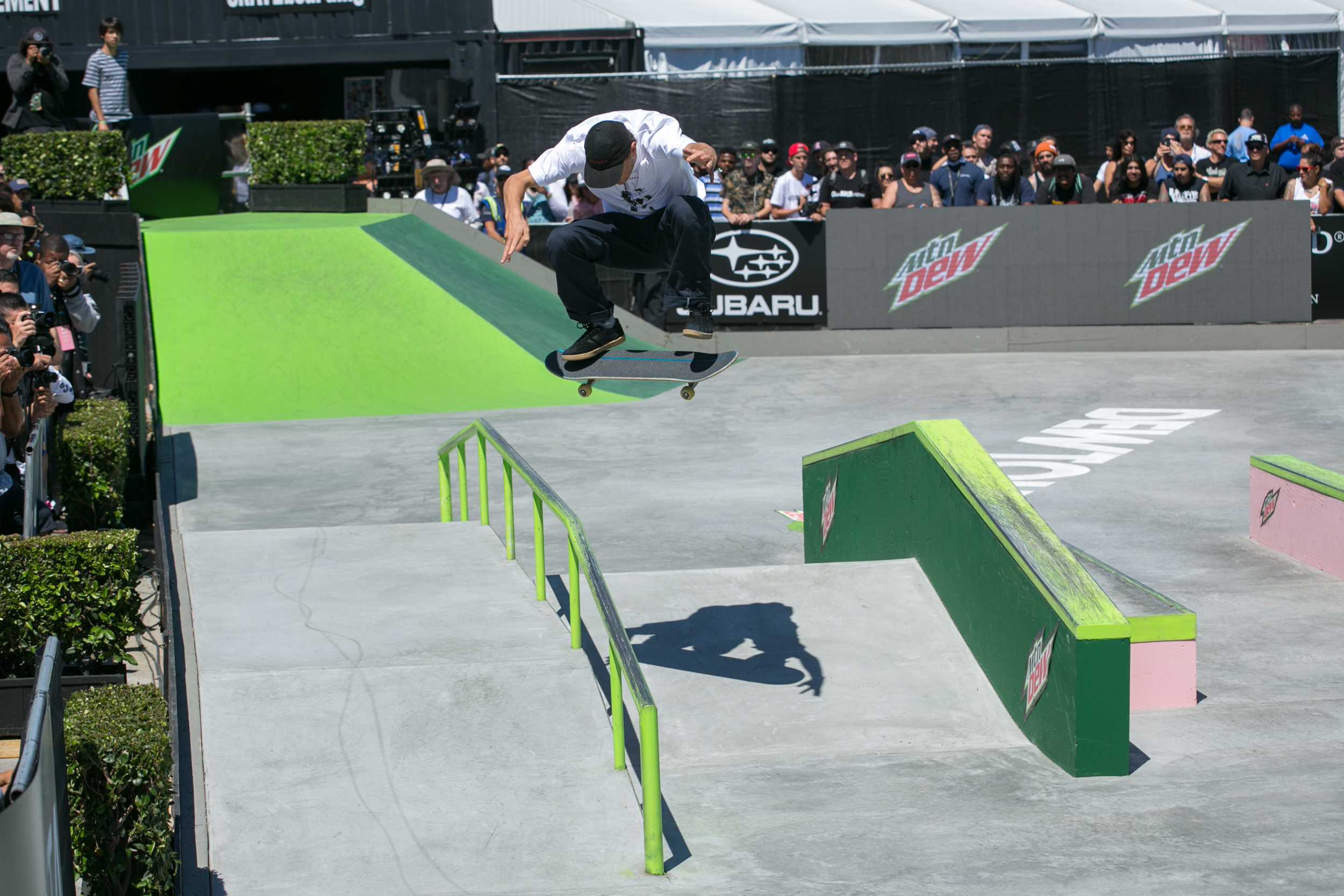 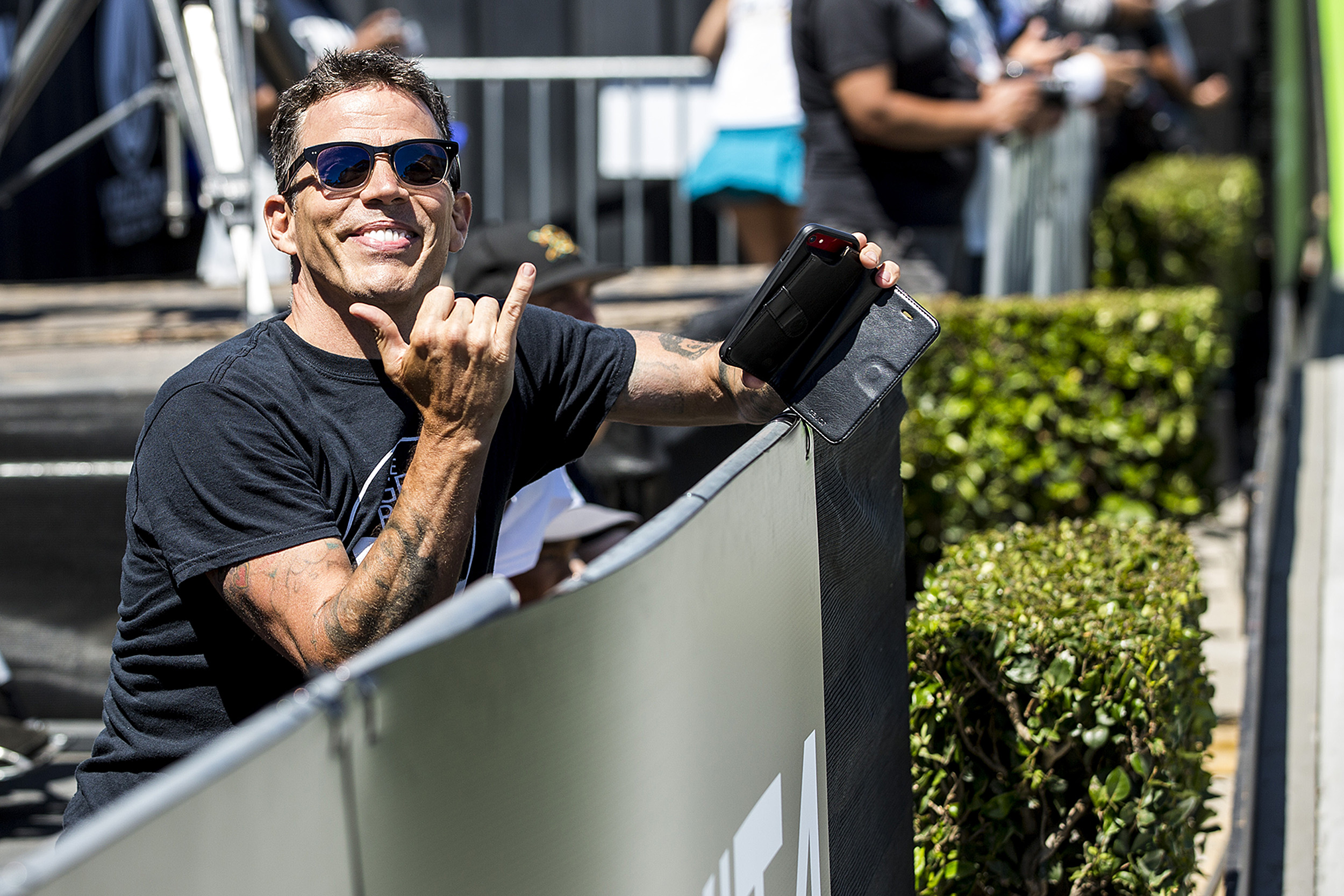 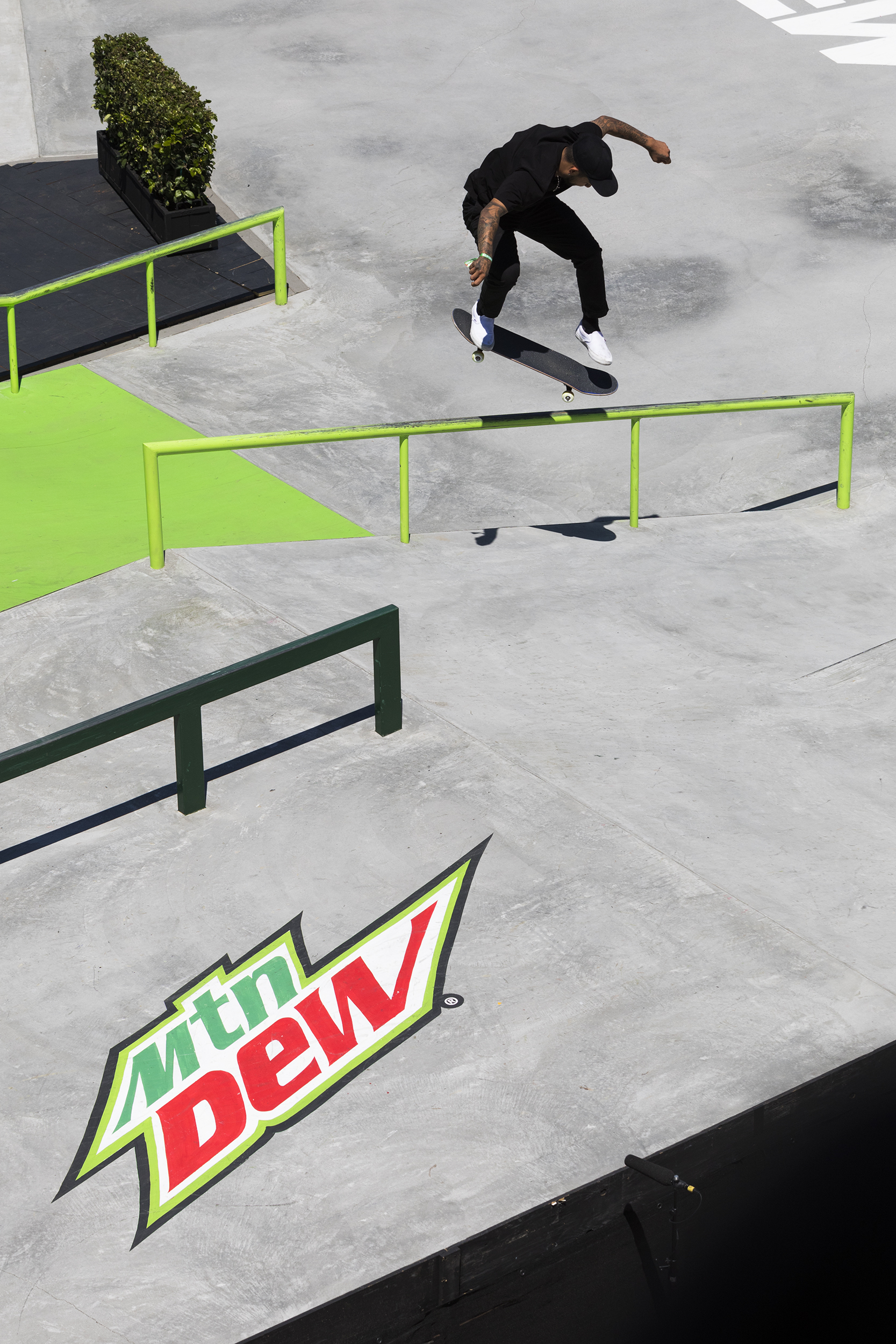 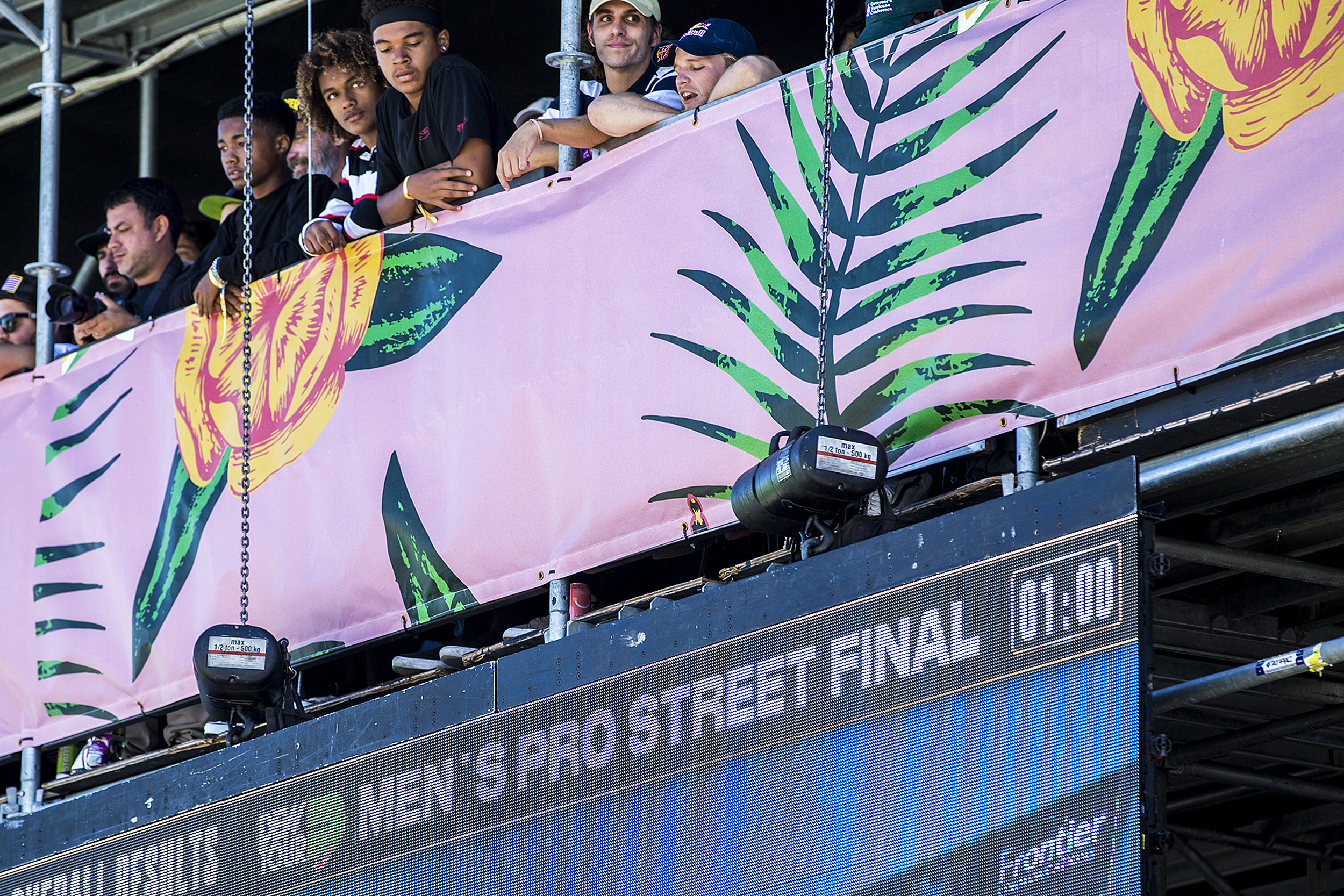 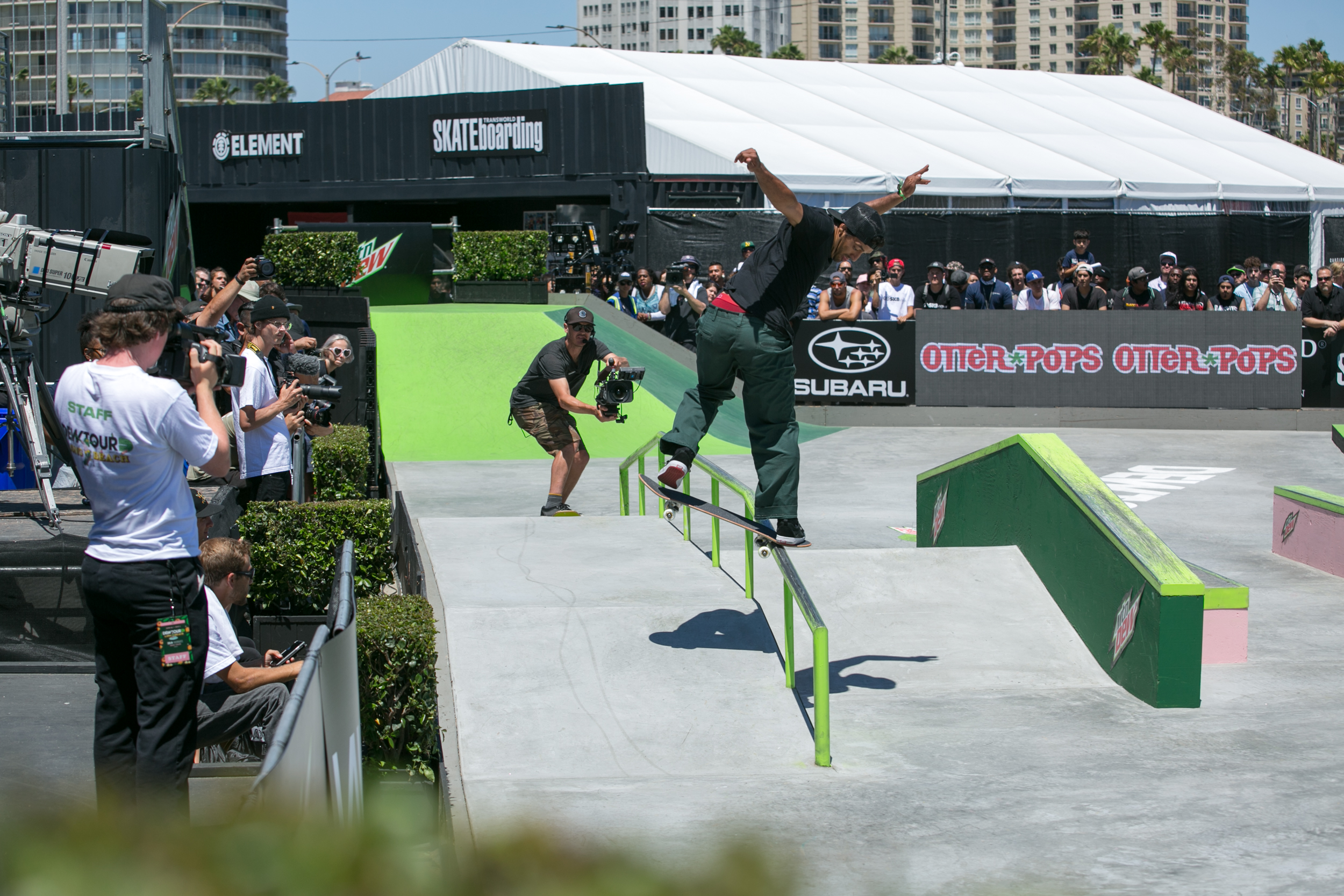 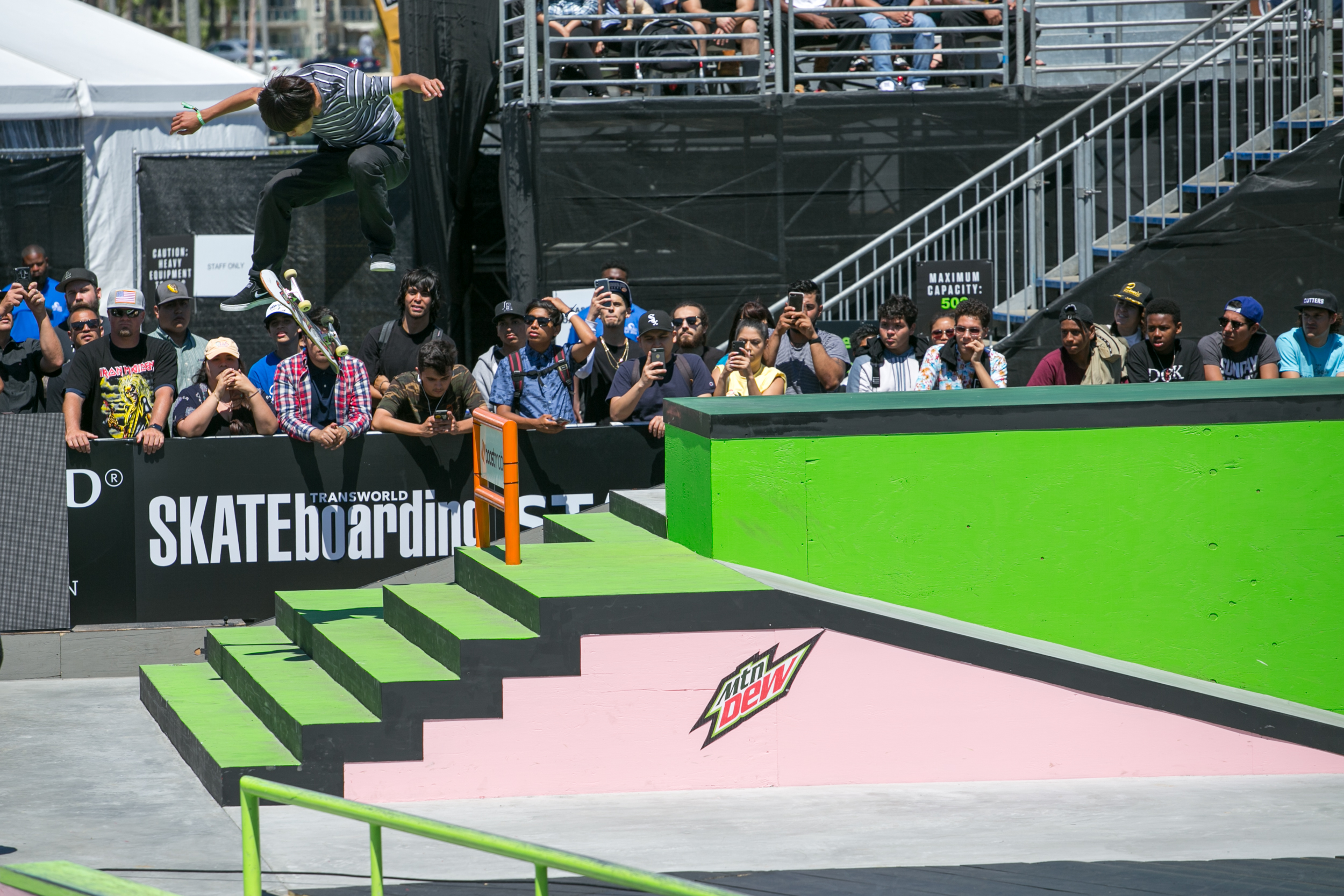 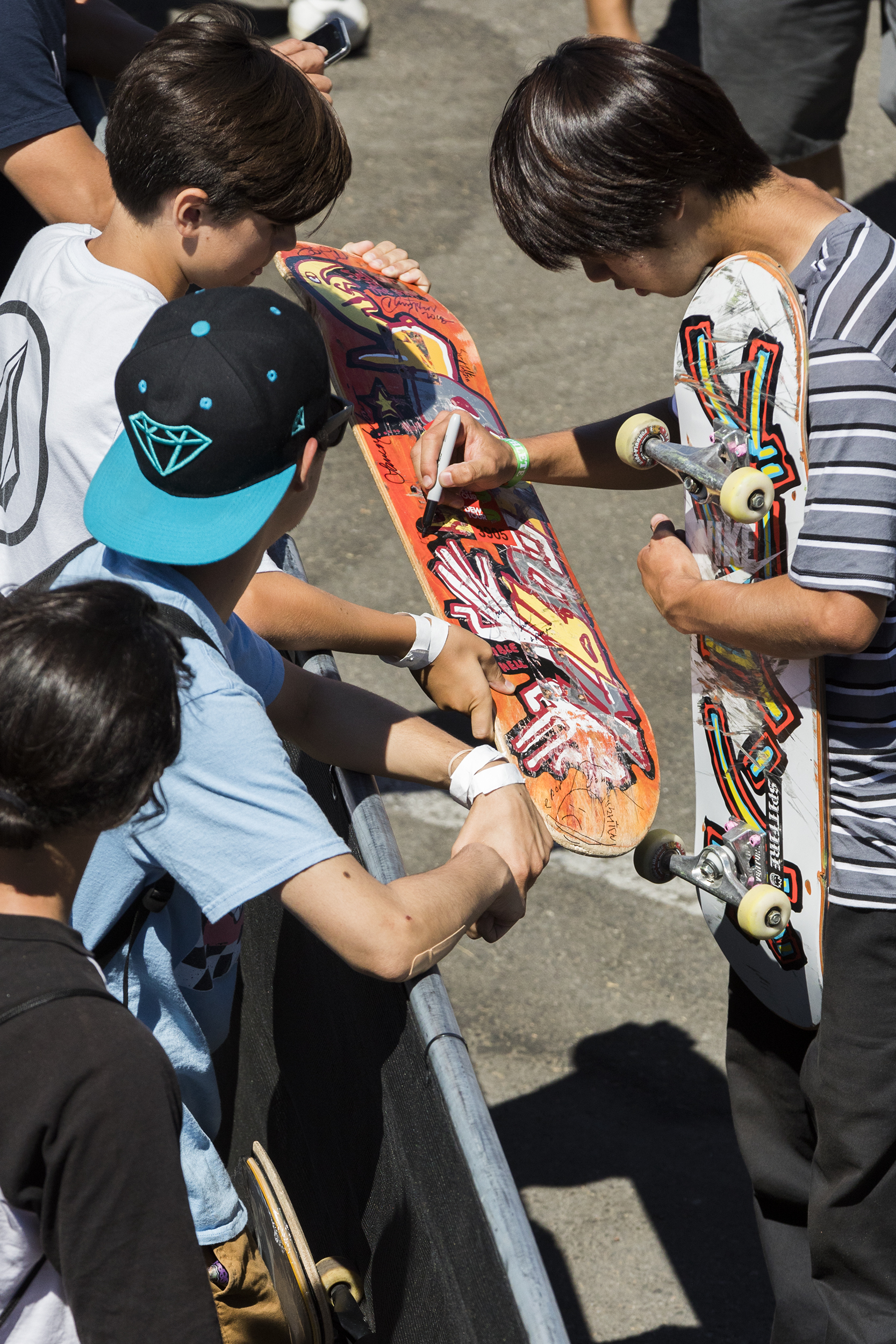 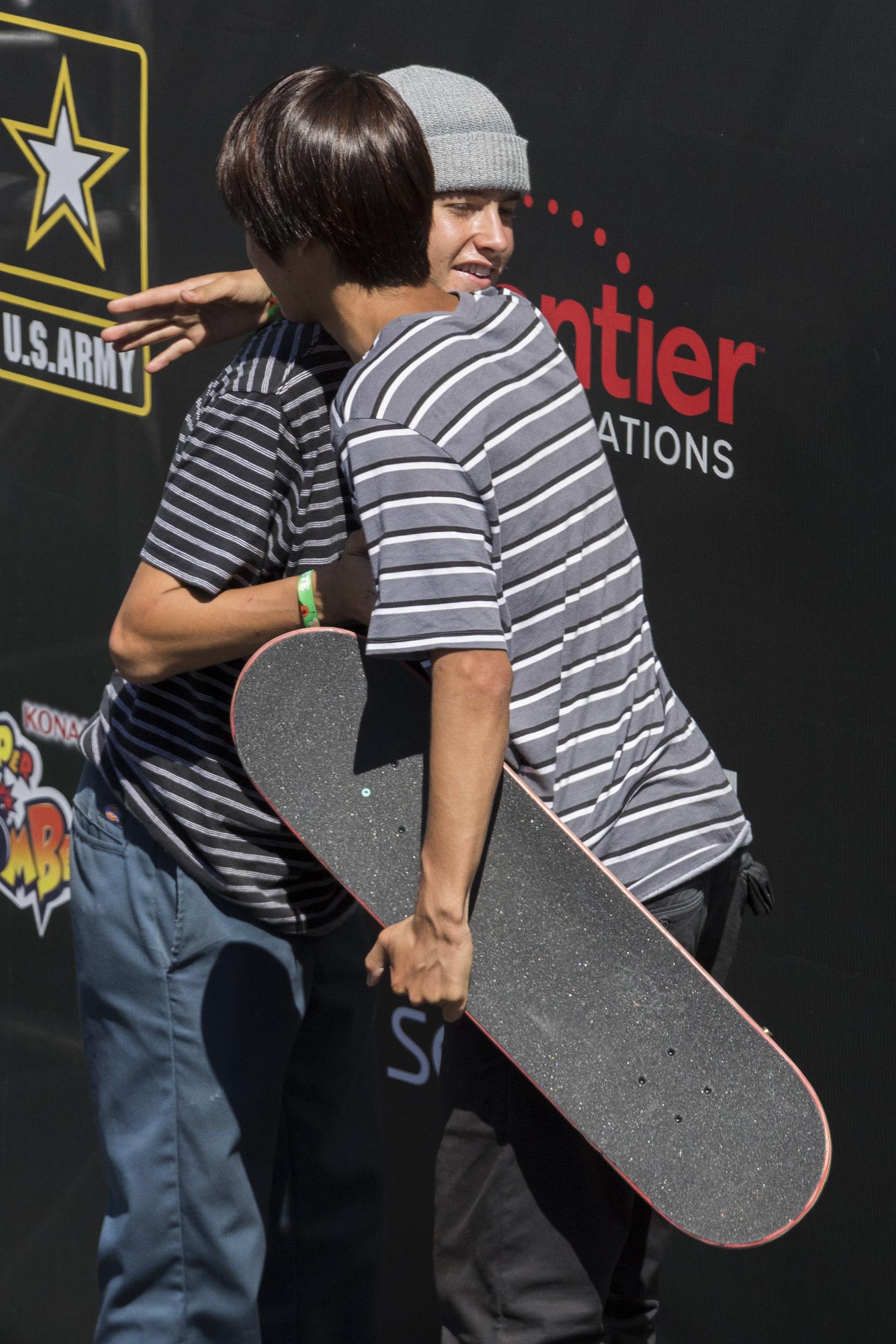 The heaviest session of the weekend started early with skaters getting down to business and practicing for the Men’s Pro Street Final at Dew Tour Long Beach 2018.

Off the course, familiar faces like Sean Malto, Jamie Foy and–the guy who certainly took on the most fan request selfies–Bam Margera were mixed in with fans, friends and dozens of other Pros in the VIP tower and other various crowds watching the action.

The first skater out practicing was last year’s defending champ, Kelvin Hoefler. Shortly after, Jagger Eaton started to chow down on some heavy “practice” runs of his own. Not long before the event was to get underway, Micky Papa took a semi-serious spill on the pyramid rail and ended up dropping out of the contest to get his ribs checked out. He showed up later, a little banged up but hanging out nevertheless.

Dashawn Jordan finished 9th in Friday’s Qualifier and was therefore bumped up into the final eight, gifted one last chance to compete. Four more, 60-second runs on the triangular course combining unique Tech, Rails and Gap sections, with only the best score counting.

“To be put in that position, you have to take it for what it is and do your best. It was awesome,” said Jordan after the event. Jordan landed primo mid-event, (Micky jokes that the position was cursed)  but after getting his foot wrapped he pulled off big overcrooks and nose blunts on the handrails and stomped a laser flip over the Boost Bar.

Chase Webb returned with a freshly shaved mohawk which only seemed to add aggression to his creative approach toward the biggest rails on course. Starting by a giant gap out to 50-50 on the double kink rail, Webb went feeble back up half the same rail before jumping straight into nose blunt fakie on the next handrail. Webb through in a 50-50 down the first down kink flat section before switching to front board for the final down section, and later gapped back up and over to board slide down both kinks.

Vincent Milou put on a front blunt performance, still hyped from his video part that premiered in town the night before. Milou front bluntslid the El Toro 20 stair handrail, so the rails on the course he managed with ease.

Midway through the event, as the light breeze makes a challenge for the crowd in the bleachers to keep the beach ball within reach, none other than Steve-O strolls into the passed the fence line into the event with a bicycle and helmet.

“I’ve been wanting to ride my bike down here from Hollywood already, and then my good buddy Chaz Ortiz calls me and says he’s got VIP passes for me. So, I rolled down. I never even check-in, dude,” laughs Steve-O, as he films Ortiz’s run with his phone from the sideline.

Ortiz pulled a perfect back tailslide and kickflip back lipslide on one of the handrails, in addition to kickflip front feeble and bigspin front boardslide on one of the bump to bars mixed into nearly flawless run not quite sticking a collie heelflip out of a crooked on a ledge. Ortiz ran to the sideline to give a quick handshake and hug to his homie Steve-O.

Ryan Decenzo just missed the podium finishing fourth, but not without stomping tricks on every section of the course. Decenzo put down a sugarcane on the A-frame, frontside 360 off the bump and over the stairs, a huge frontside flip to flat and even a nollie backside heelflip off over the Boost Bar.

Rounding out the podium were the two early arrivals to practice, Jagger Eaton and Kelvin Hoefler. Hoefler had a hard time with his first two runs but his third brought it all together. He finally landed the kickflip blunstslide to fakie that had been alluding him in the other runs, and he capped things off with a half cab to noseslide then popped it over to back tail before landing fakie.

Jagger Eaton had an amazing second run. After hitting a switch tail across a bump to bar, he landed kickflip back lipslide down a handrail straight into a blunt frontside flip out on a quarterpipe to then backside 360 off the bump over the stairs and ultimately ending with a backside bigspin to front board on a handrail.

But in the end, Yuto Horigome felt zero pressure as his final run turned into a victory lap. After missing a bigspin in his first run he sacked out on one of the handrails, a tragedy that would have left most skaters sidelined for the rest of the day.

“I was left a little nervous, but it was kind of like a good warm up,” laughed Yuto reflecting on his handrail bail.

The bleachers were packed from start to finish for the Men's Pro Street Final. Photo: Durso

Chas Webb switched up to front board after first hitting 50-50 down and thru the first kink and flat sections of the rail. Photo: Durso

Vincent Milou threw down during the Men's Pro Street Final with tricks like this kickflip gap lipslide. Photo: Durso

One of many perfectly caught kickflips into a back lipslide down the handrail from Chaz Ortiz. Photo: Strand

Ryan Decenzo went big with this frontside flip and took it to flat. Decenzo finished the day in 4th overall. Photo: Durso

So many pros were hanging out watching the Men's Pro Street Final, including Jamie Foy in utter disbelief of the action witnessed. Photo: Ortiz

Kelvin Hoefler gapped out to lock into this back noseblunt while en route to a second place finish. Photo: Durso

Jagger Eaton finished the day in second overall after landing a couple backside 180 nosegrinds on this A-frame ledge. Photo: Strand

Yuto Horigome nailed this 360 regular during his second run and then switch in his victory lap. Photo: Durso

All love between Jagger Eaton, 2nd, and Kelvin Hoefler, 3rd, as they are handed their awards. Photo: Strand

It came down to a tight finish, but in the end Yuto Horigome edged out Jagger Eaton by less than three points. Photo: Strand