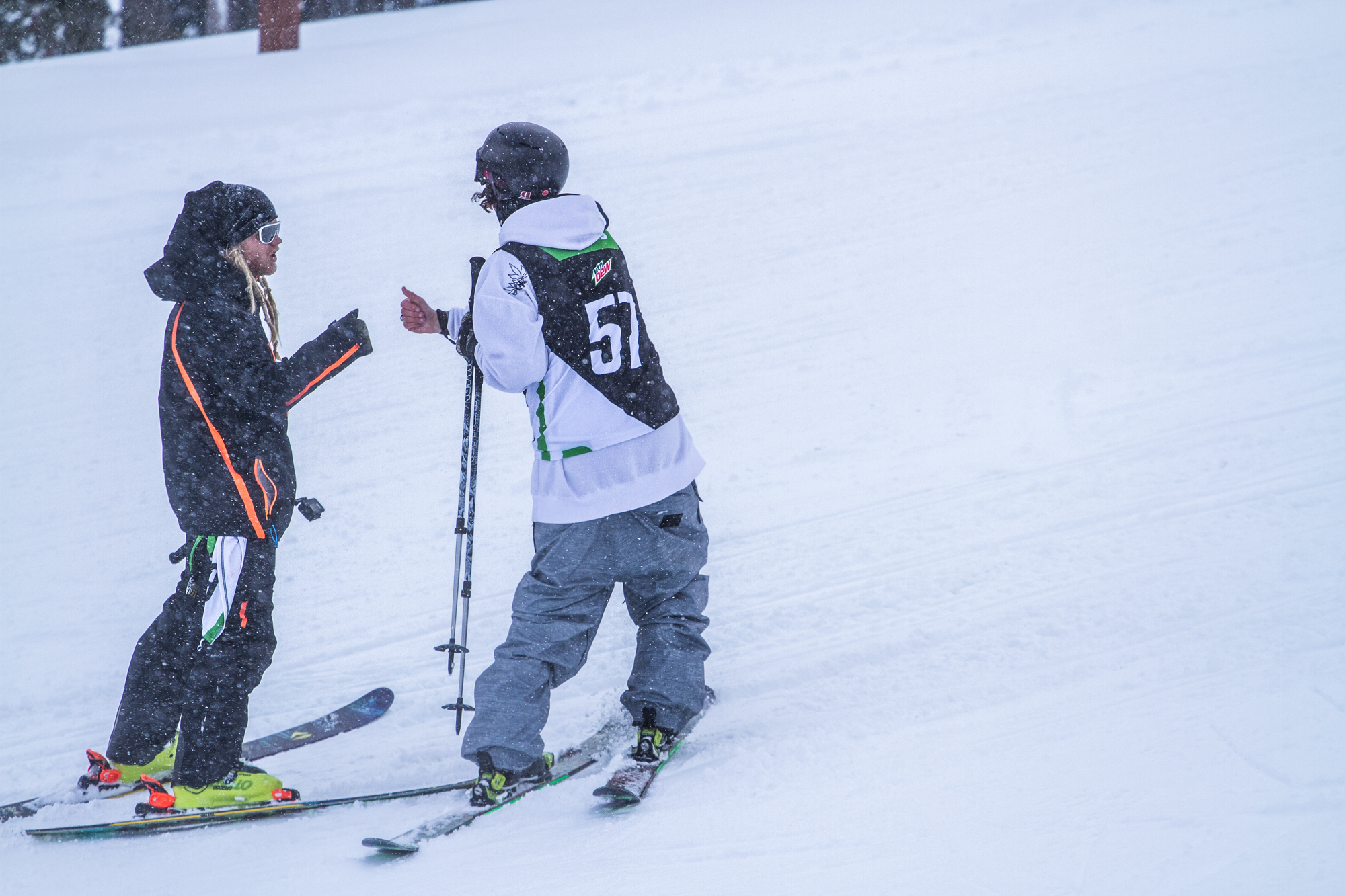 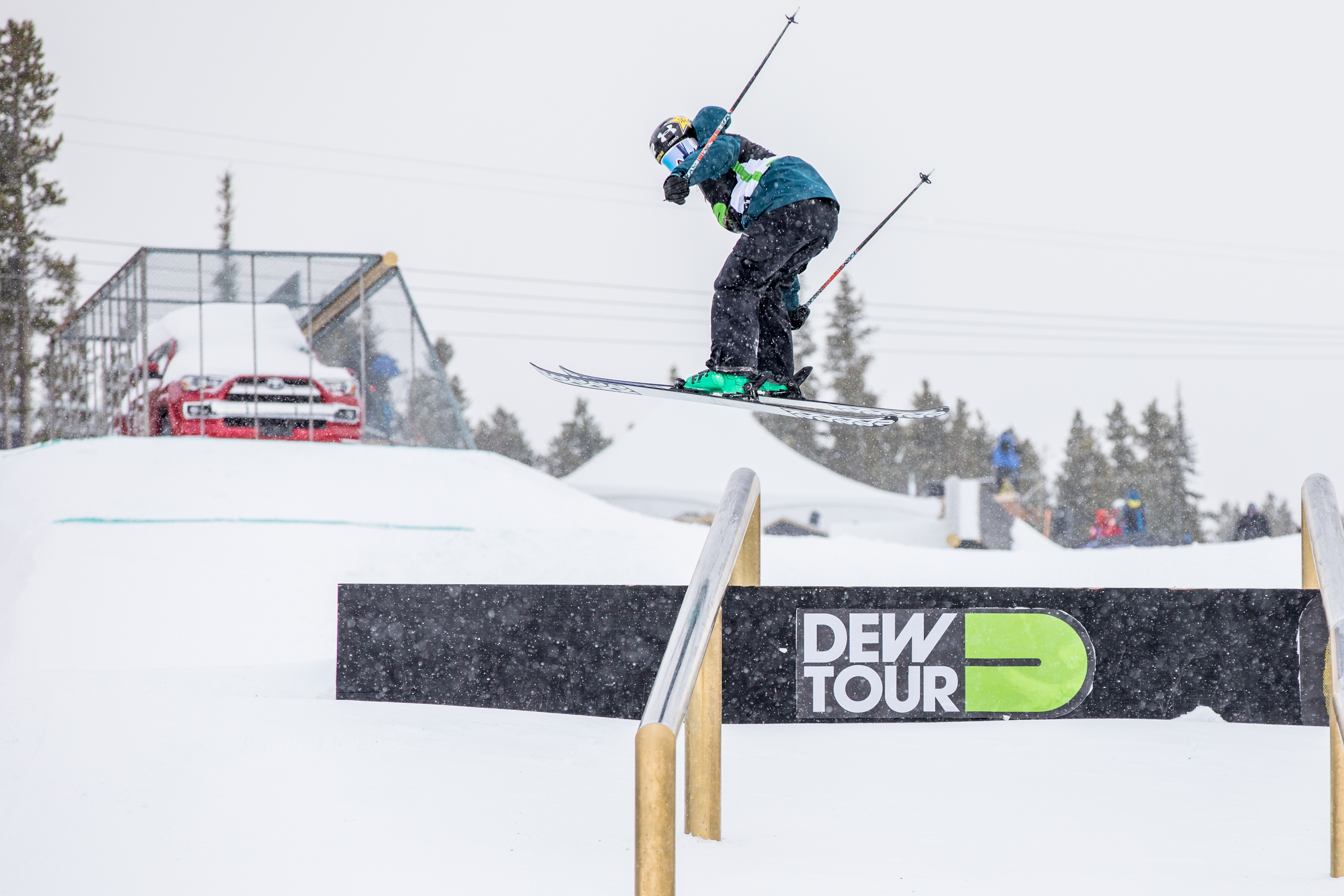 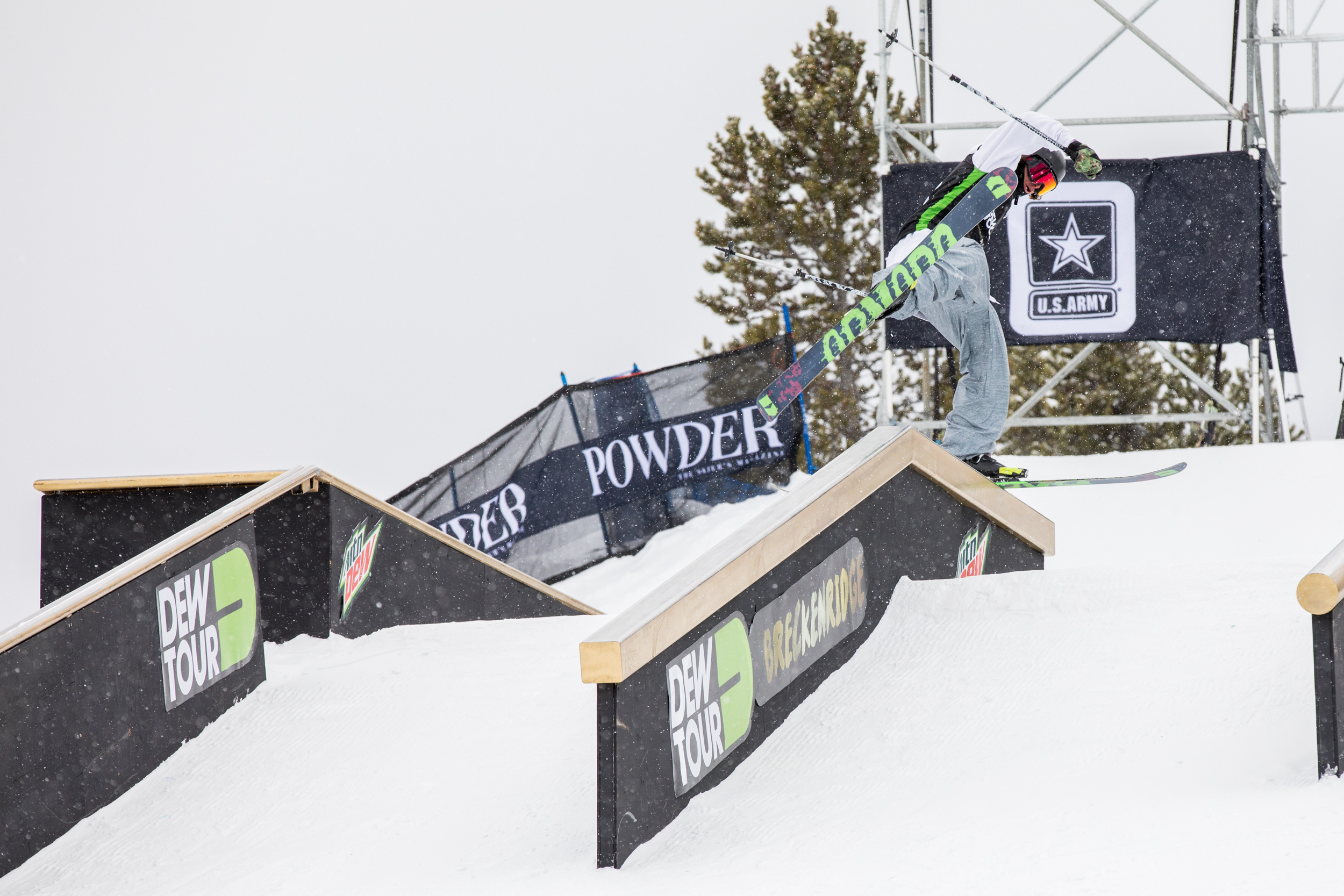 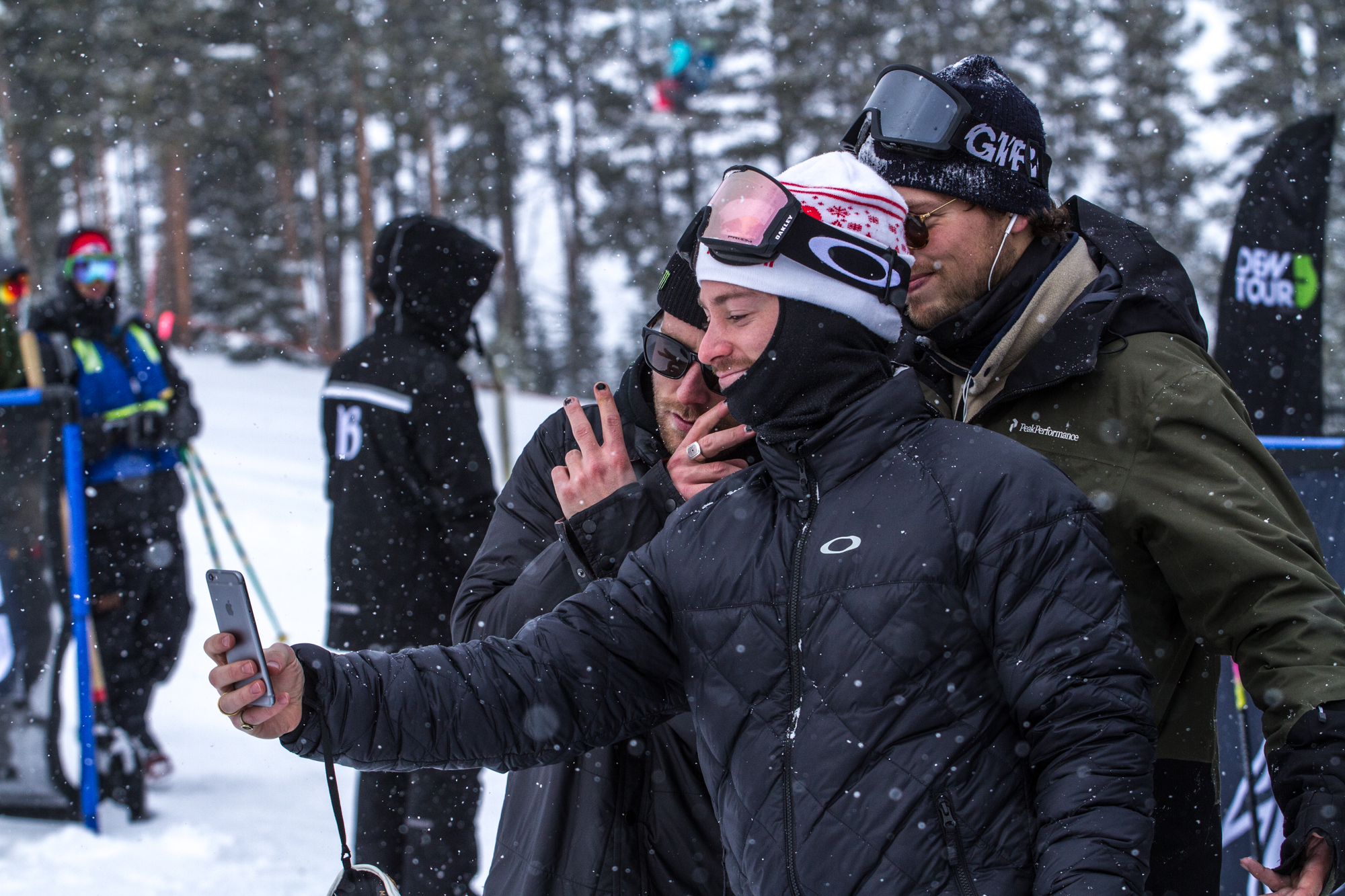 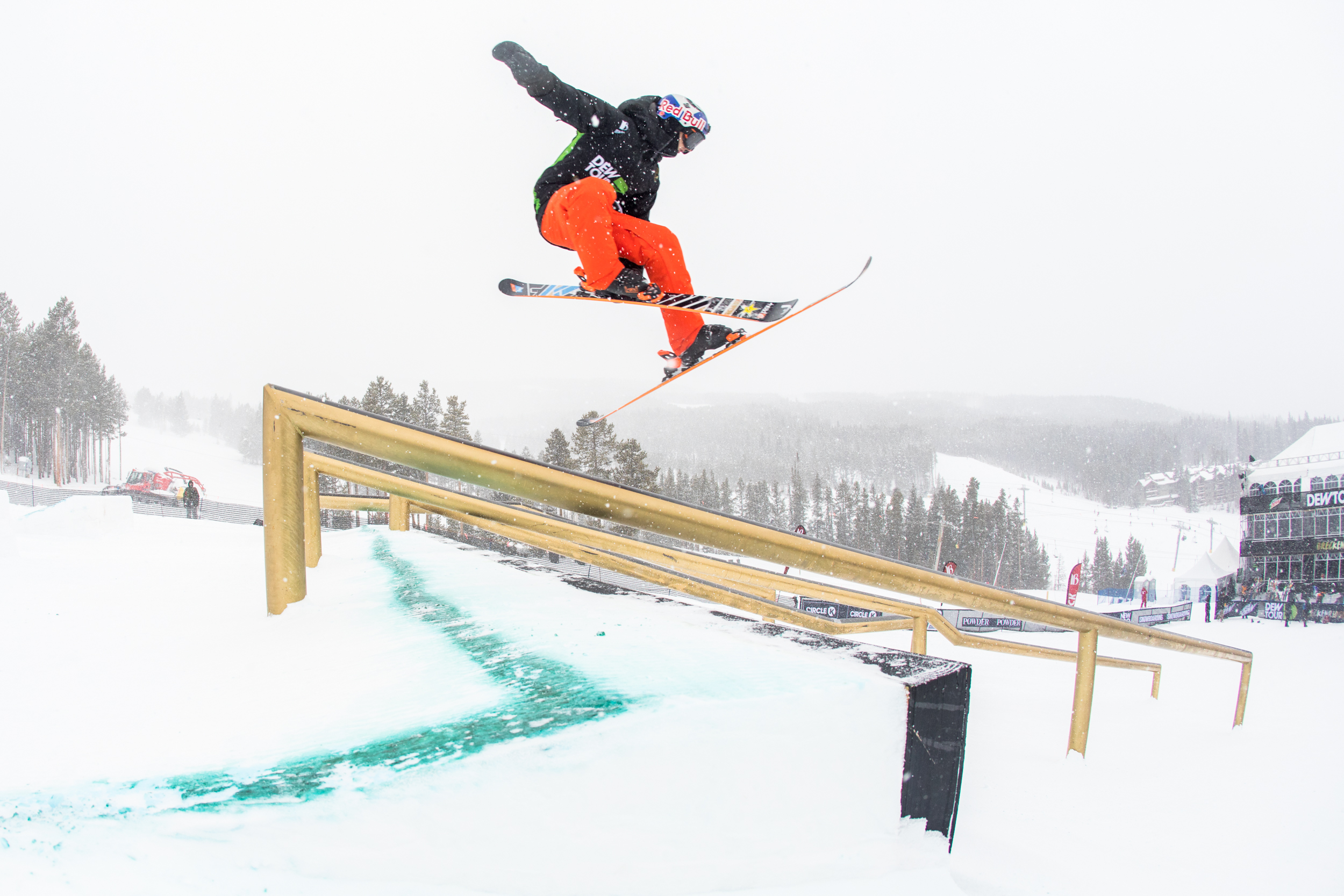 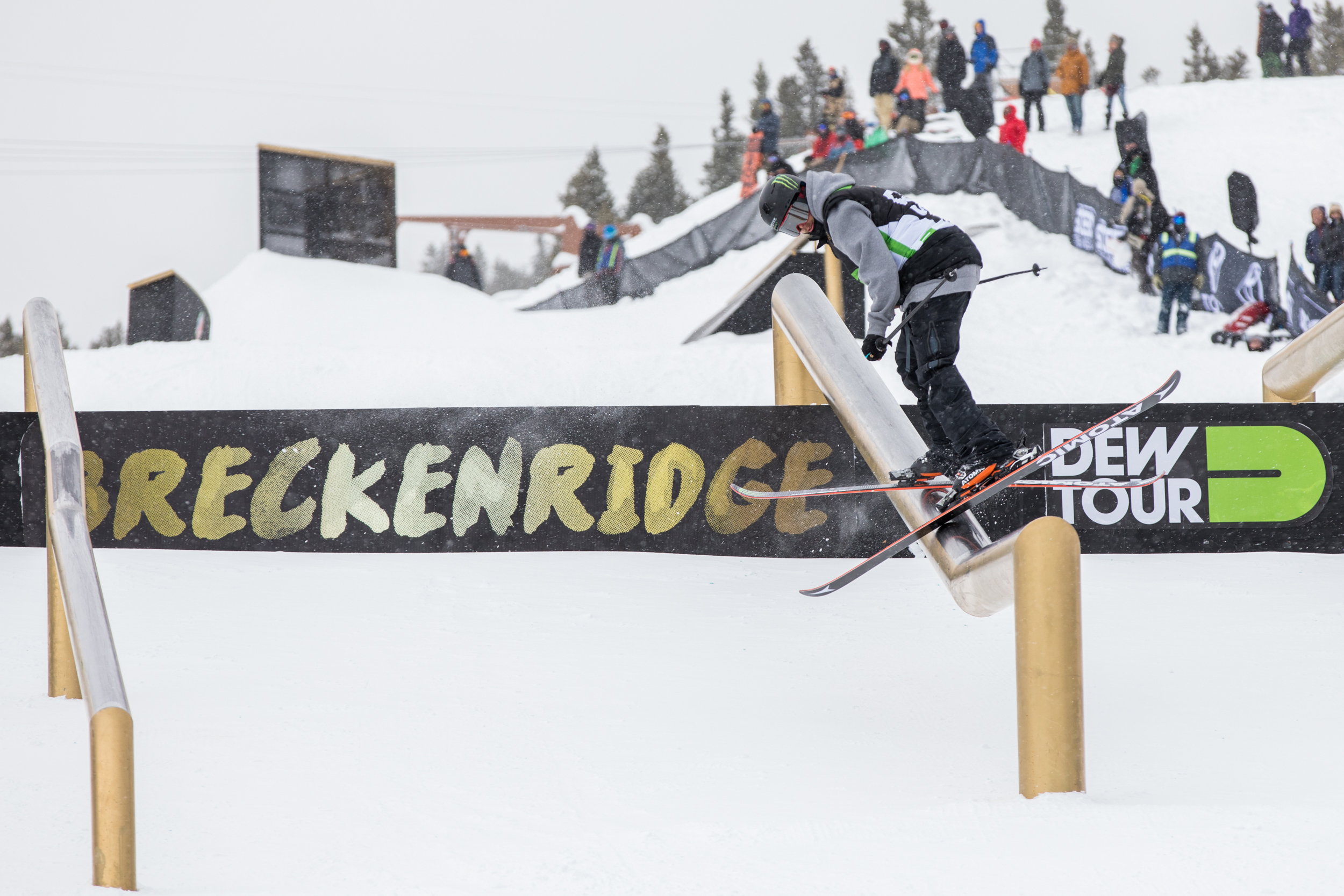 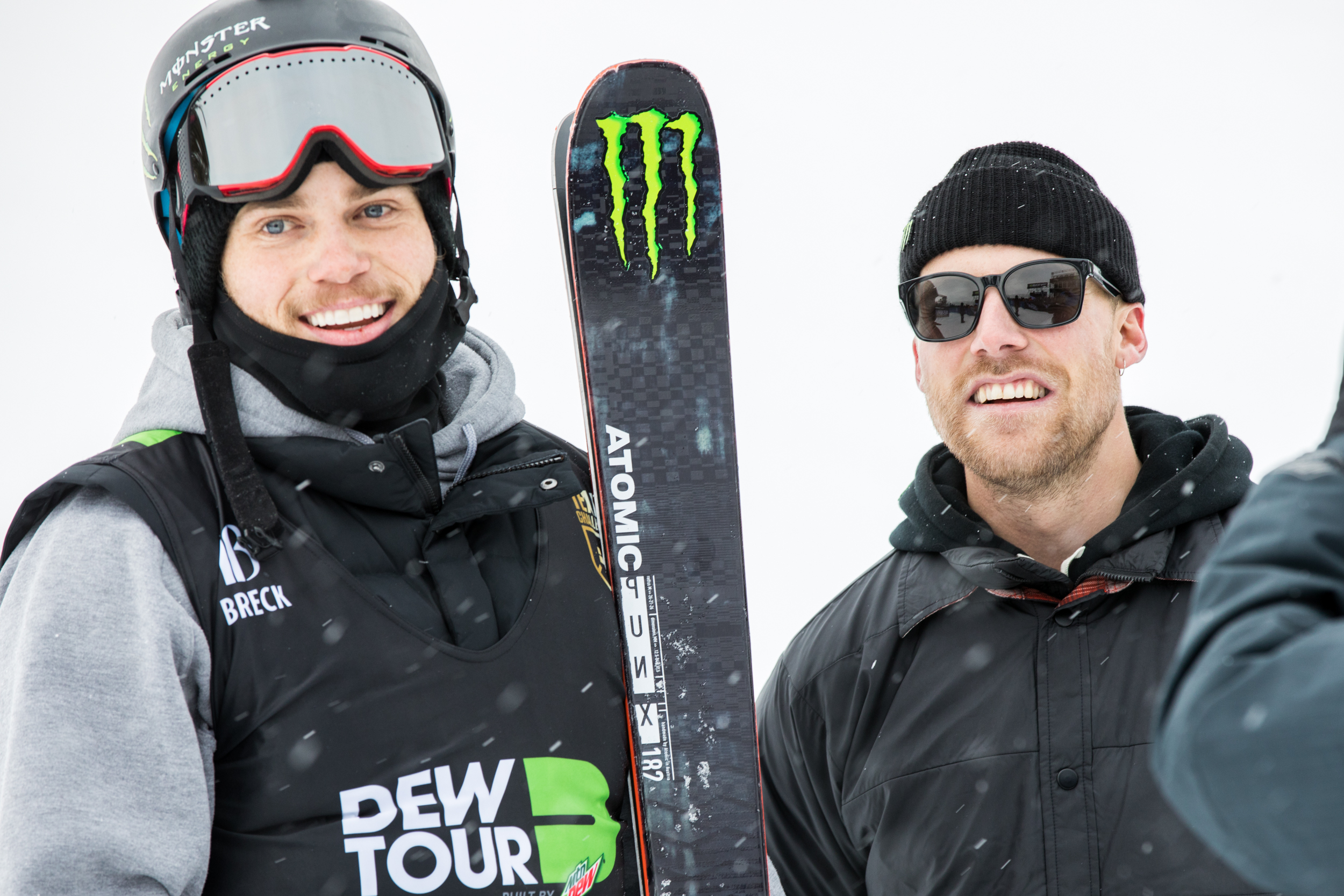 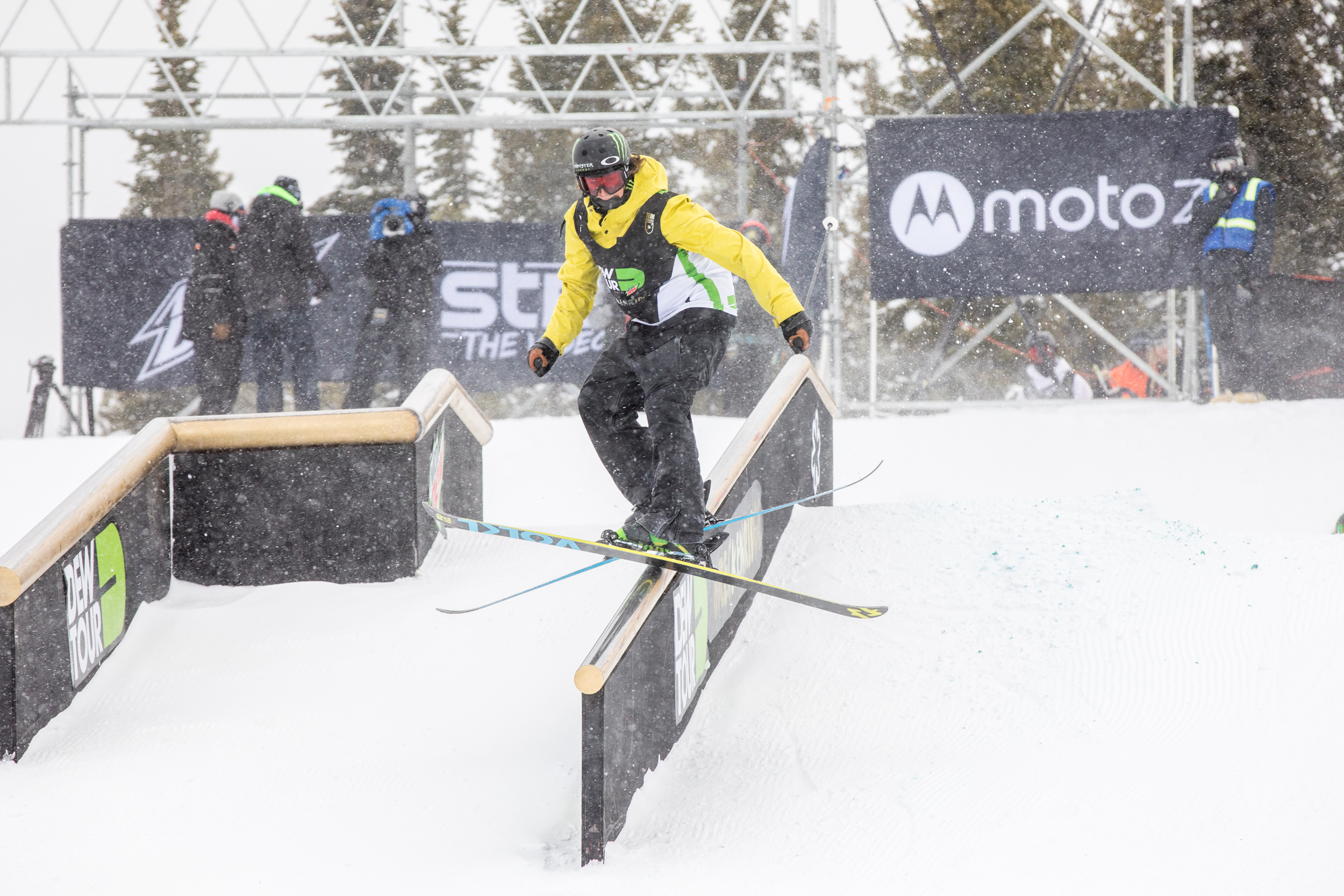 A day after watching the men’s and women’s ski fields do battle for the individual Slopestyle prize, Sunday was all about the teams, as six brands went head-to-head in the first-ever Dew Tour Breckenridge Team Challenge.

High winds and snow again had their say Sunday, shifting the two-part competition from a jump section and a jib section to two jib sections. Each team nominated a single rider for each of the two jib sections, providing a variety of styles and tactics to the rails course.

In the end it was Team Atomic’s dominant Gus Kenworthy performance and last second Jossi Wells substitution that proved to much for the rest of field, and the team skated away with the victory followed by Alex Beaulieu-Marchand and Nick Goepper’s Team Volkl in second and Jesper Tjäder and Evan McEachran’s Team Head.

“We’re all homies regardless of who we’re skiing for or what country we’re from, but to be a part of a team like this and come through and medal together is a great feeling,” said Wells.

Wells’ teammate, Kenworthy had an uncharacteristically rough week leading into the Team Challenge, falling on his jump section and unable to put down any major scores in the jib section of the reimagined Dew Tour Ski Slopestyle Pro Competition on Friday and Saturday.

“After this week, it just felt good to throw down and get some points up there for Atomic,” said Kenworthy after his jib performance.

Shortly after Kenworthy’s run, organizers announced that unpredictable winds had made the jump section a no-go, shifting action back to the jib course for a second round.

Organizers weren’t the only ones making moves, as Team Atomic captain Wells elected to step in for Fabian Boesch on the rail section.

The move ended up paying big dividends, as Wells recorded the highest score of the day with a run that mirrored his jaw-dropping jib run from Saturday. Wells went 270 on to 270 out on the top feature before again landing his wall-to-wall transfer into an ollie 270 on to the flat down tube, a wall ride to 270 transfer, and a dialed 630 on to 270 out.

Alex Beaulieu-Marchand continued his impressive week by stomping two of his runs en route to a second place finish in the first frame of the team jib section for Team Volkl. His performance helped Team Volkl finish second, making it the third podium for ABM this week (he also finished third in the Streetstyle Competition and third in the Slopestyle Pro Competition.)

“I just feel lucky and blessed,” said ABM of his win. “I’ve just been giving it my all everyday and I’m happy it all worked out. I don’t know if there’s a secret, but you just don’t control anything really except what you are doing. You can’t control the judges, you can’t control the other riders. I’m just stoked I landed my run. That was my main goal to throw down what I wanted to do.”

Whipping winds and blowing snow again added variables to the course, and soft landings and transitions tripped up a few competitors early. Still, skiers were able to put down big runs late.

“It was the same kind of conditions [as yesterday],” continued ABM. “Today was a little more variable, windier, a little more snow, a little less consistent. So I just went with a safe run, because I wanted to put it down and got a pretty good score. I’m happy with it.”

Dew Tour rookie Quinn Wolferman delivered one of the most unique runs of the day, including a one footed back swap to 270 out on the flat down rail. Unfortunately, he couldn’t put a full run together, and he and teammate (as well as Slopestyle Pro Competition champion) Henrik Harlaut, finished off the podium.

Well, that’s it, that’s all from Dew Tour Breckenridge 2016. After three full days of men’s and women’s competition in the redesigned Dew Tour, Henrik Harlaut and Kelly Sildaru walk away with the men’s and women’s Slopestyle Pro Competition crowns, and Team Atomic stands alone as 2016’s Team Challenge champion.