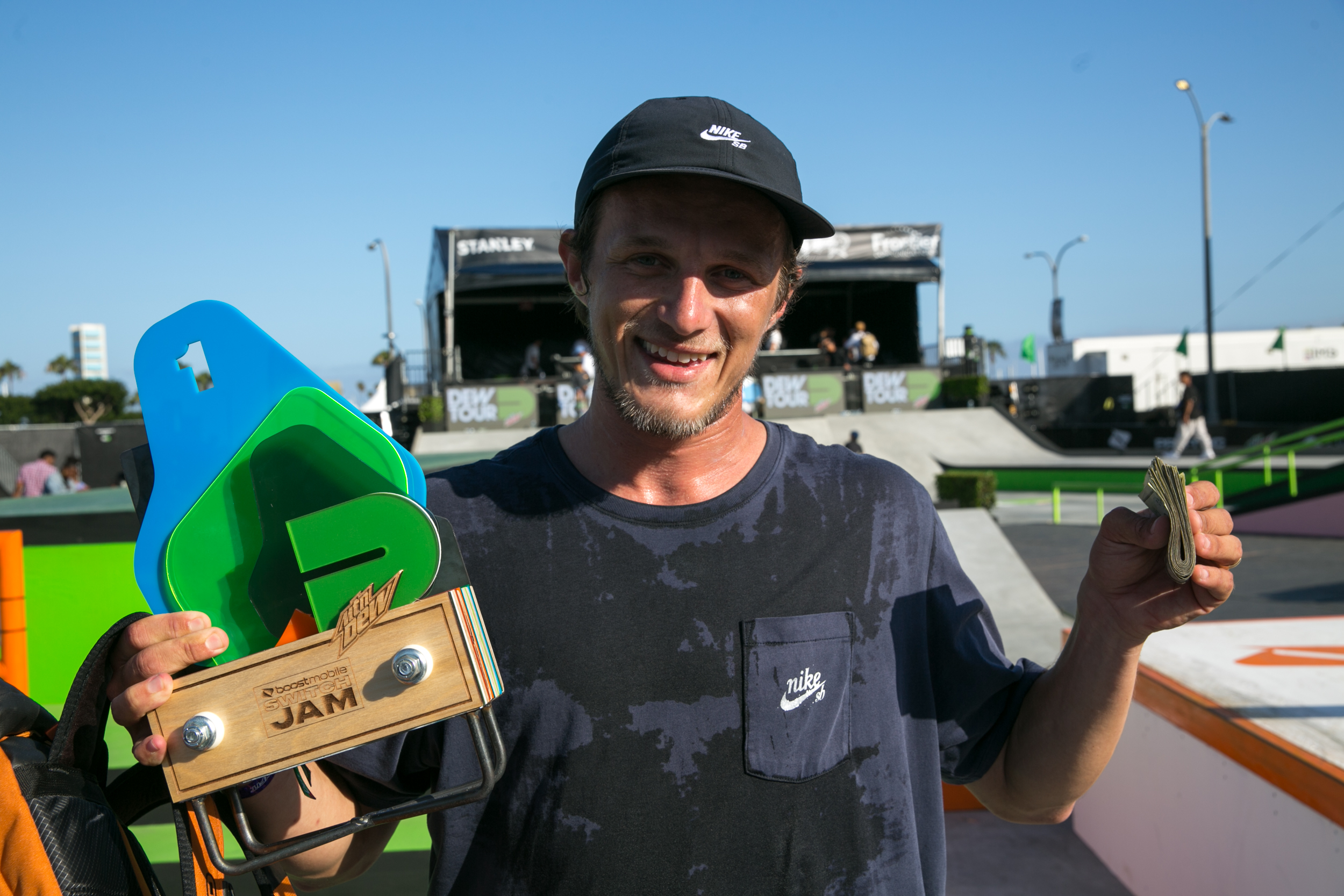 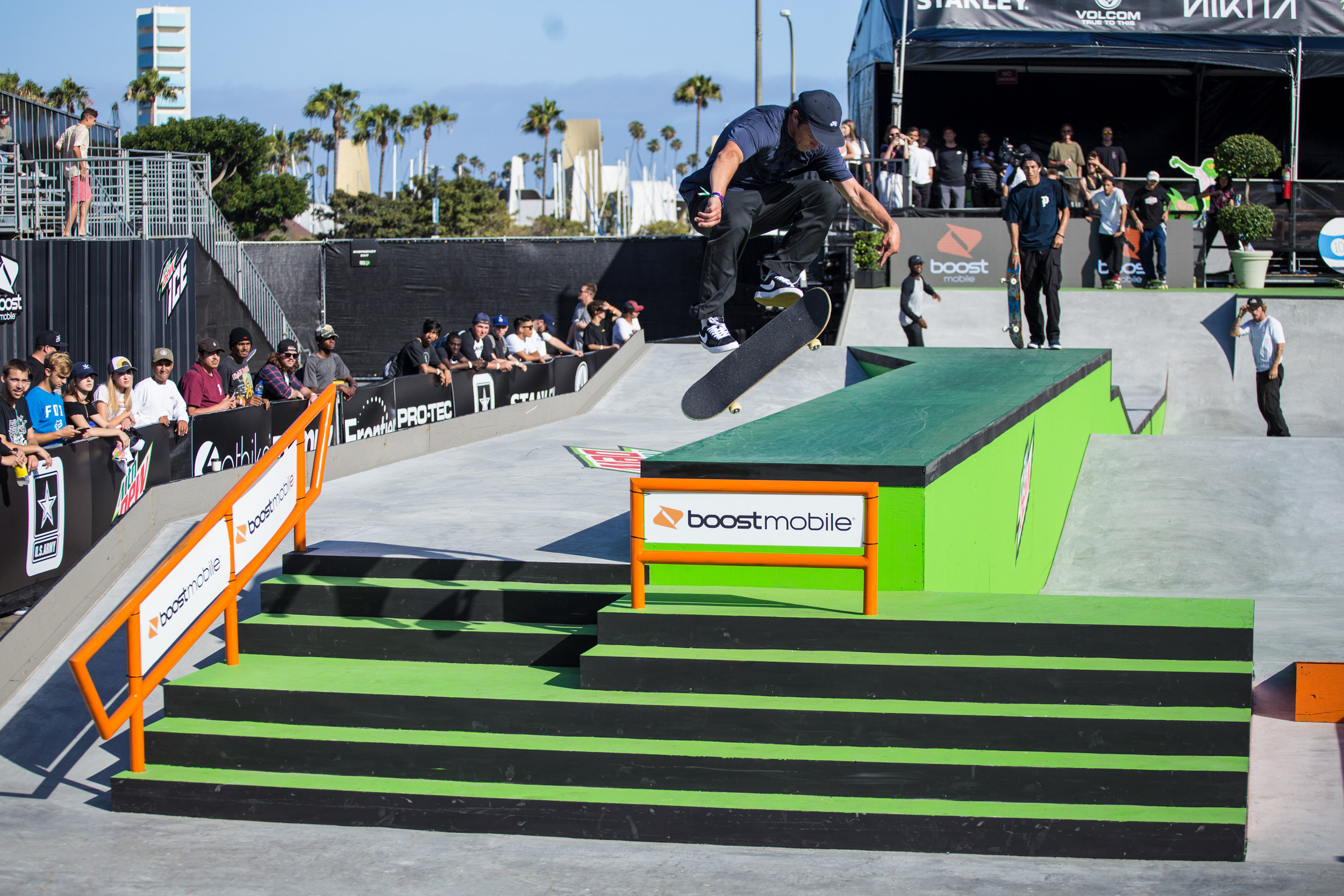 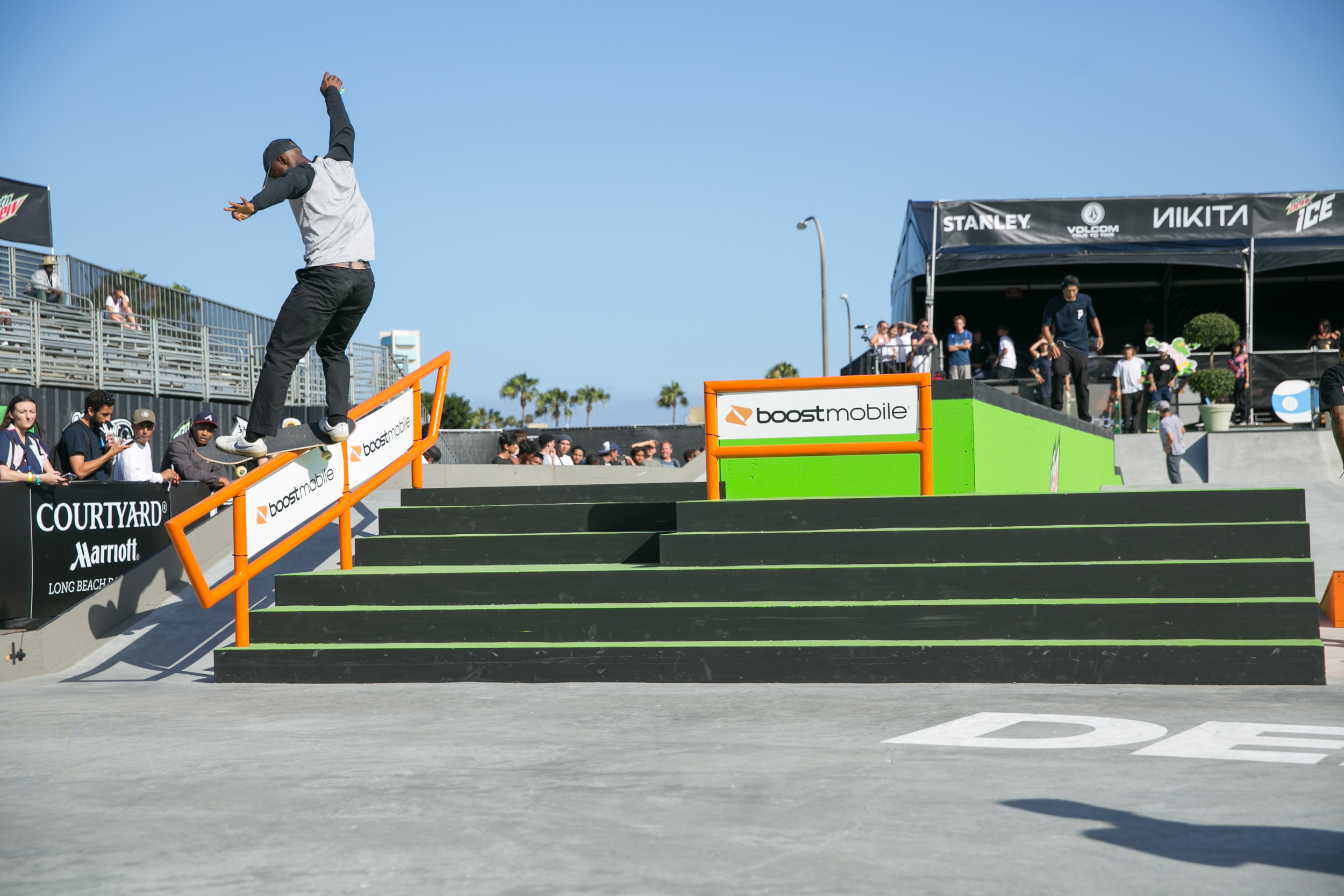 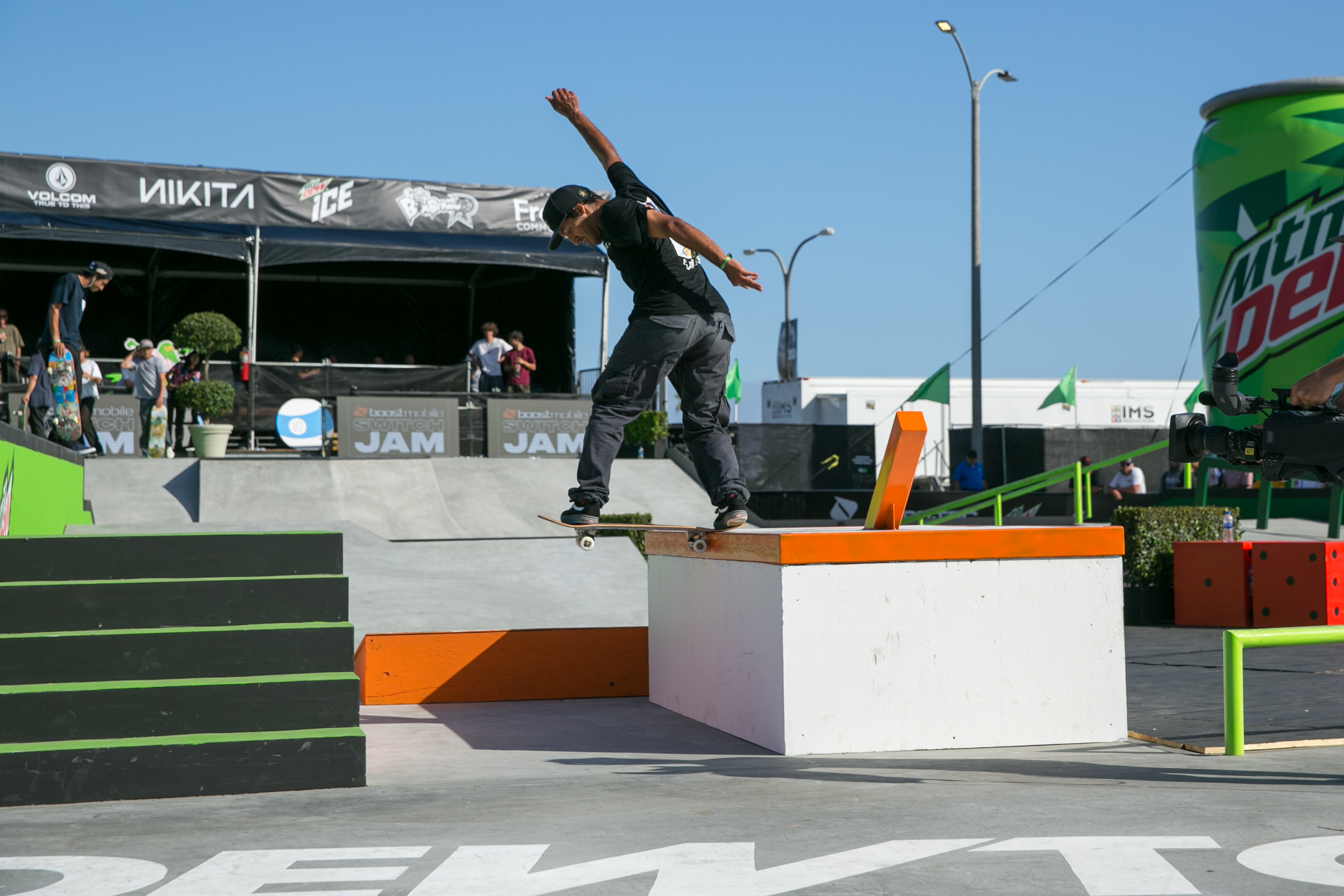 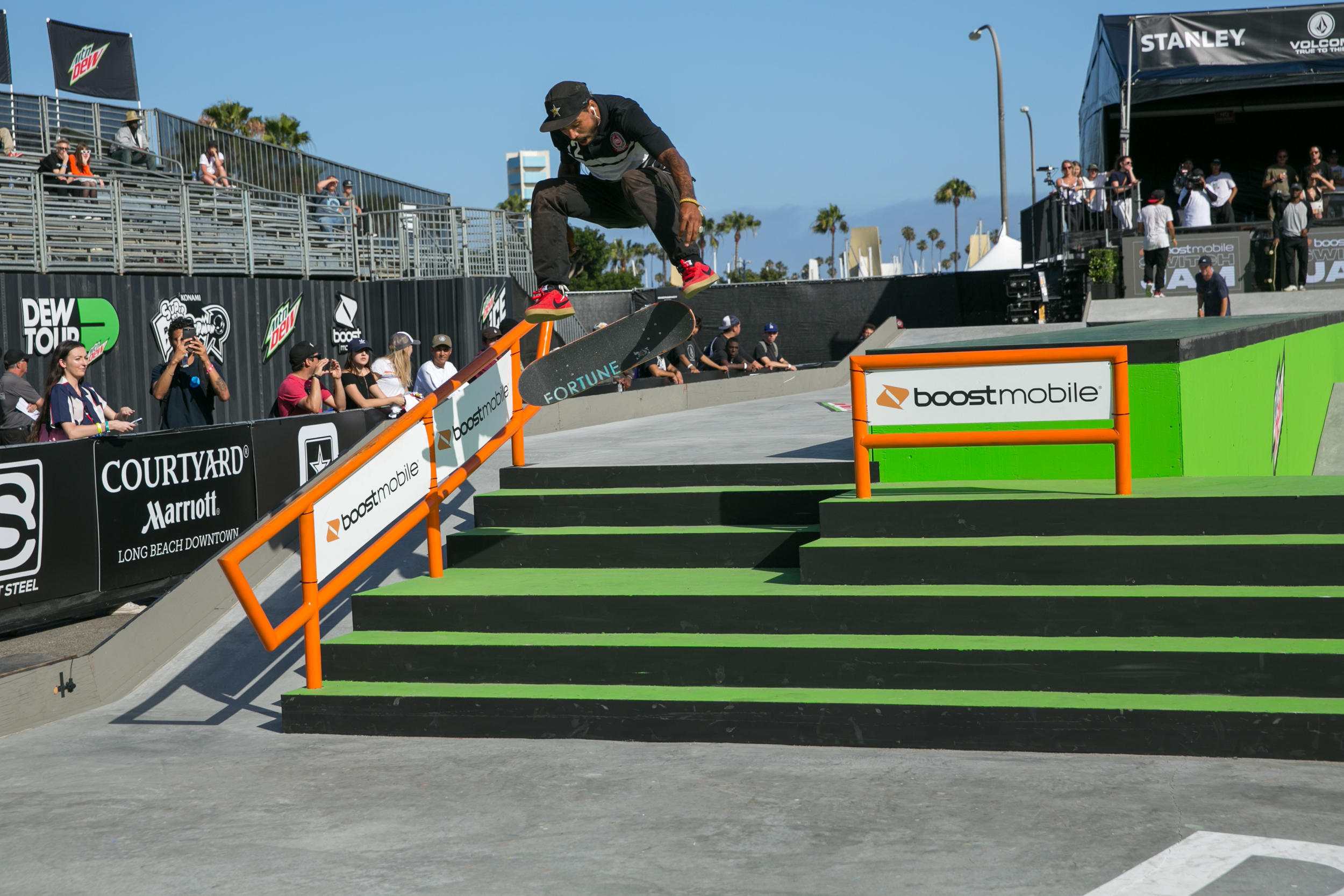 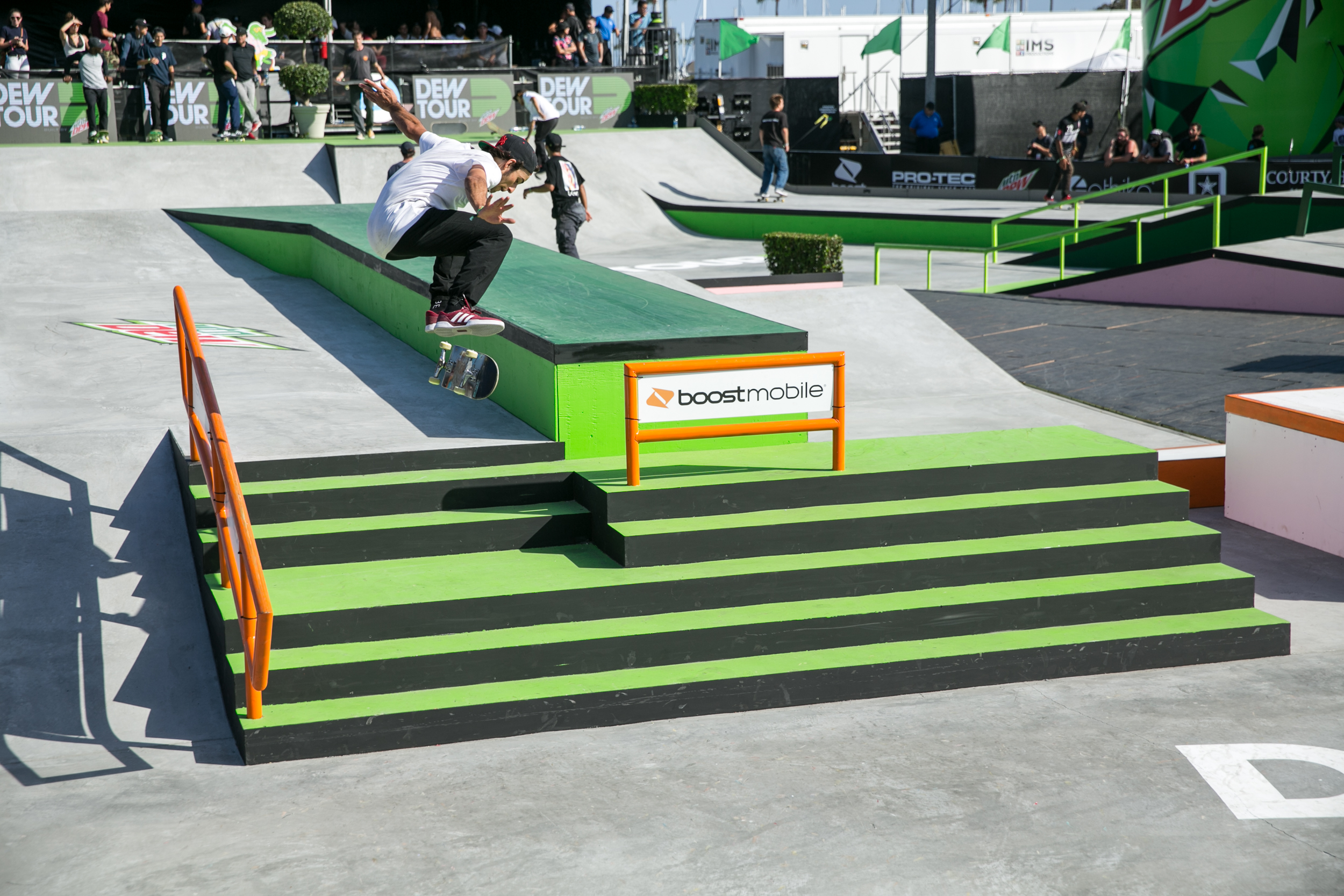 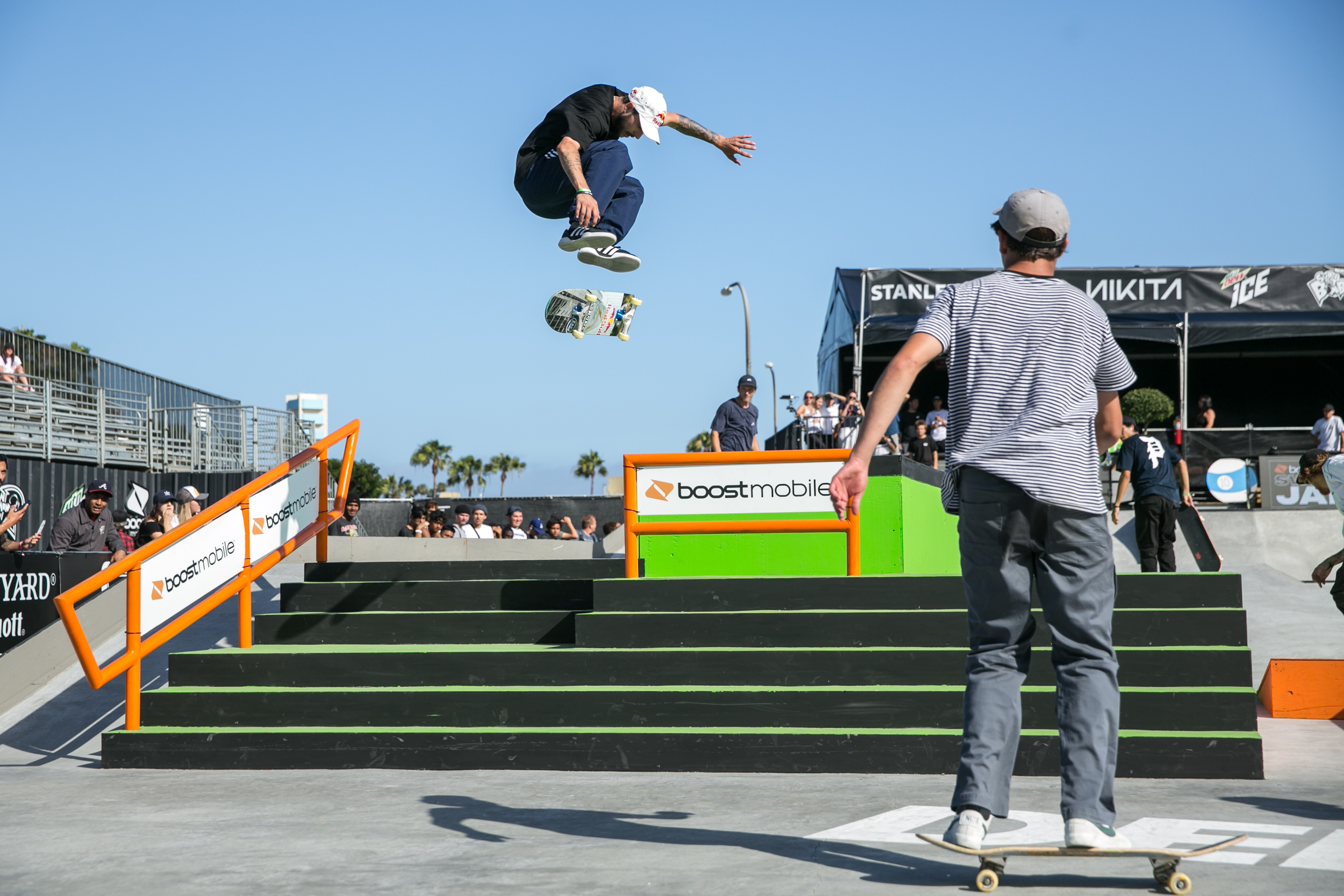 Directly following the Men’s Pro Street Qualifier, the Dew crew opened up the side of the gaps course to move in two fresh obstacles just for the switch jam. Already part of the gaps section was a Boost Bar to clear while tricking of the top and over stairs, then came in a new Boosted handrail to place down the double set along with a gigantic ledge with a pole jam off the top—the obstacle looked just like a light switch.

10 skaters were invited to battle it out in a switch stance jam session only for thirty minutes, and as soon as it began all ten rushed the course all at once. Watching and rewarding the tricks being landed were Blair Alley and Andrew Cannon with no less than $5,000 in various bills.

The best battle of the Switch Jam was that between TJ Rogers and Alex Midler to see who would be the first to switch pole jam backside 180 out of the Switch box. They had $500 on the line for the single trick, and after a slightly sketchy make by TJ he was offered a $50 but he resisted to keep the $500 on the line. Midler’s next try cracked his board and then TJ followed up with a clean make. The crowd completely erupted with invested emotion.

“It was a super good time. Long, painful, but I loved it,” said TJ still wiping the sweat off from the session. “It’s rad that we have a bunch of different events every day.” When asked how he felt about grab some cash during the jam after every trick he landed, he laughed saying, “Yeah, that’s rad, too!”

TJ’s sickest trick of the Switch Jam was his switch tail slide 270 heel flip out on the side of the Boost Mobile Switch, but it was a very close call between his ode to Stevie Williams with a switch pop shuv revert over the the Boost Bar

Though many may have thought it was TJ with the win, Carlos Ribeiro was granted to the victory. The single hardest trick being named Ribeiro’s switch kickflip to back tail slide down the Boosted double set handrail.

“I think I only landed two tricks,” laughed Ribeiro. The other trick he landed was the switch backside 360 down the double set, which was a request from Keegan Palmer watching from on the course. Ribeiro laughed saying he was not wanting to try the 360, but he made it happen despite not landing one in over a year because he watched Keegan land a switch kickflip in response to back up one of Ribeiro’s.

When asked how he felt about a Switch Jam being an event of its own added to Dew Tour, Ribeiro said he had never thought about something like that. He admitted to finding the idea interesting, “To be honest, I like [having a jam contest within a contest] a lot. It takes your head off of just focussing too much on one single minute and run.”

Carlos Ribeiro, his trophy, and a fat stack of cash. When you got it like that, it must be nice. Photo: Durso

Carlos Ribeiro stomped a switch 360 flip down the biggest gap in the place. Photo: Durso

Chase Webb held it down in the Boost Mobile Switch Jam, with tricks like this. Photo: Durso

Events like the Boost Mobile Switch Jam were made for guys like Manny Santiago—switch frontside flip down the double set. Photo: Durso

Micky Papa nailed this switch flip down the double set like a walk in the park. Switch. Photo: Durso

Blind’s own TJ Rogers, switch heeling much higher than necessary. Just one of many tricks Rogers put down in the Boost Mobile Switch Jam. Photo: Durso