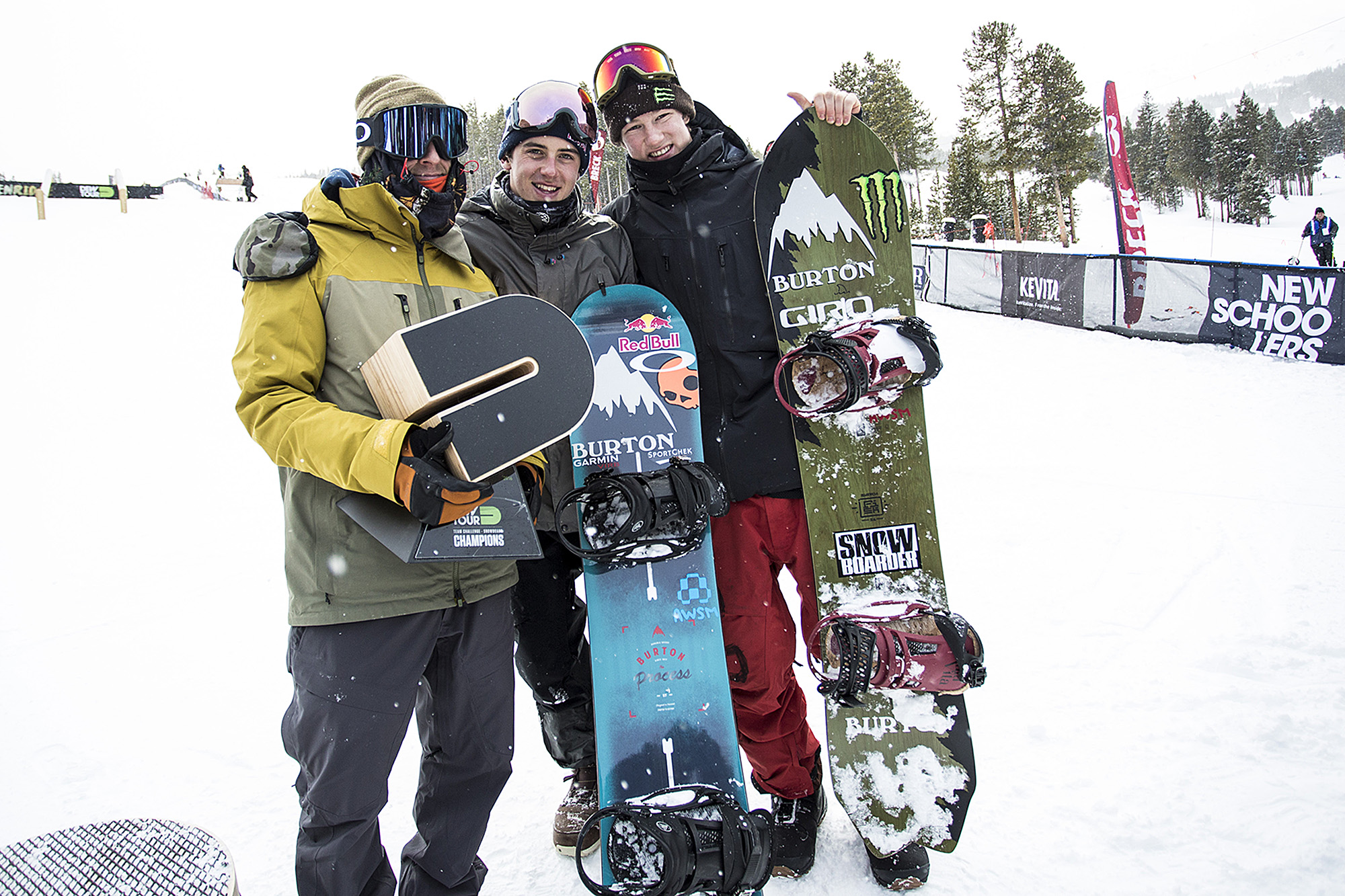 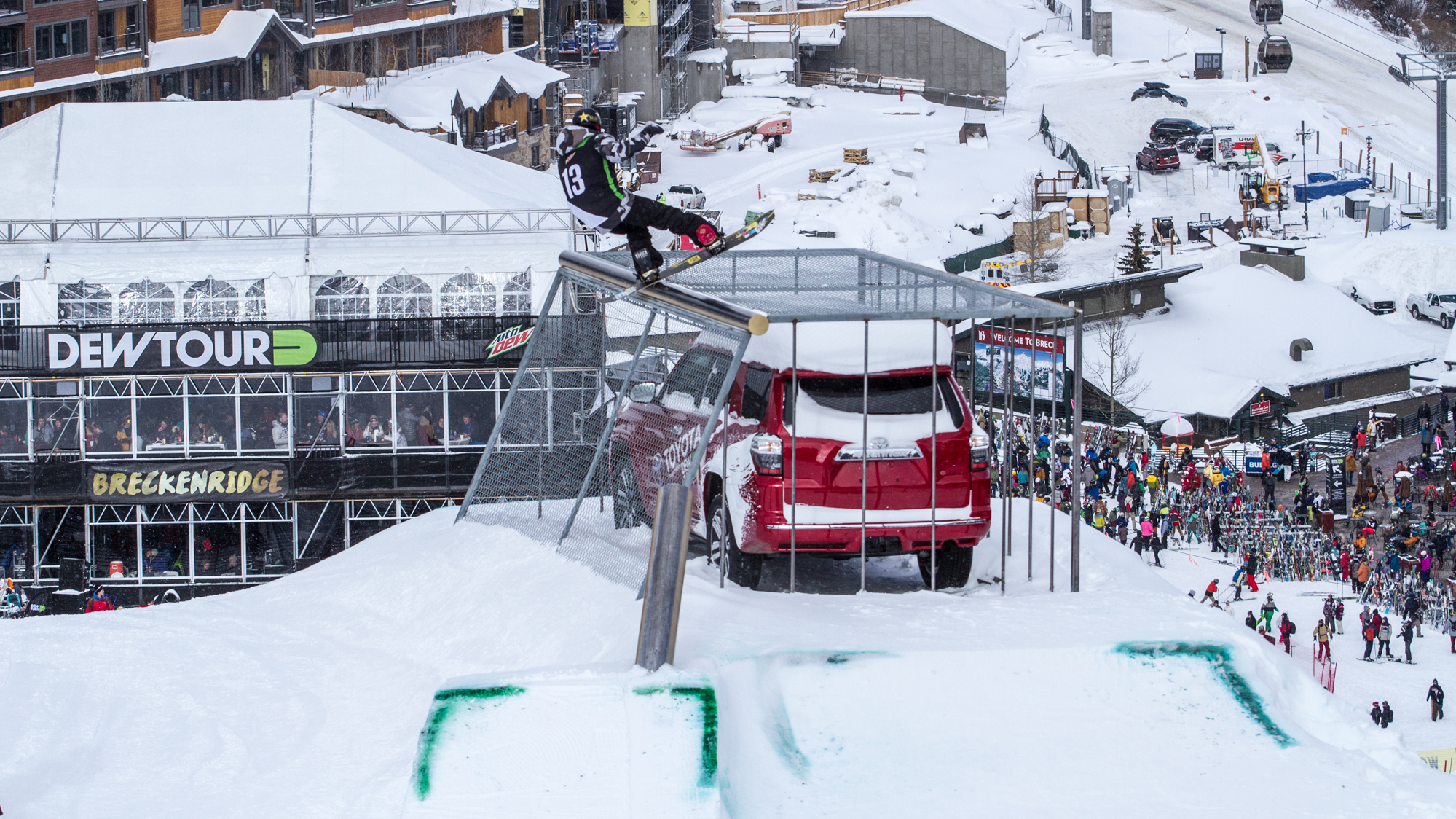 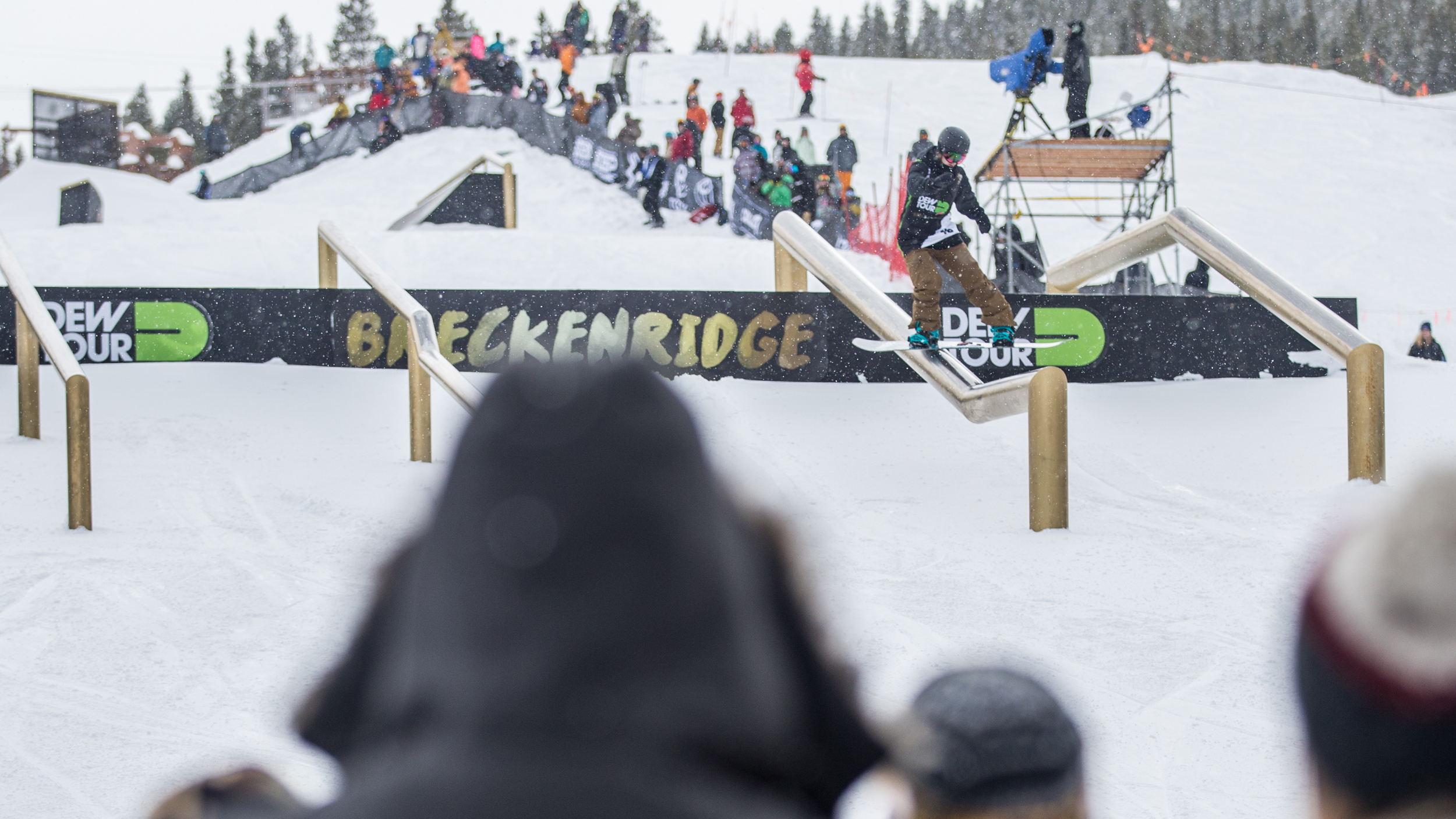 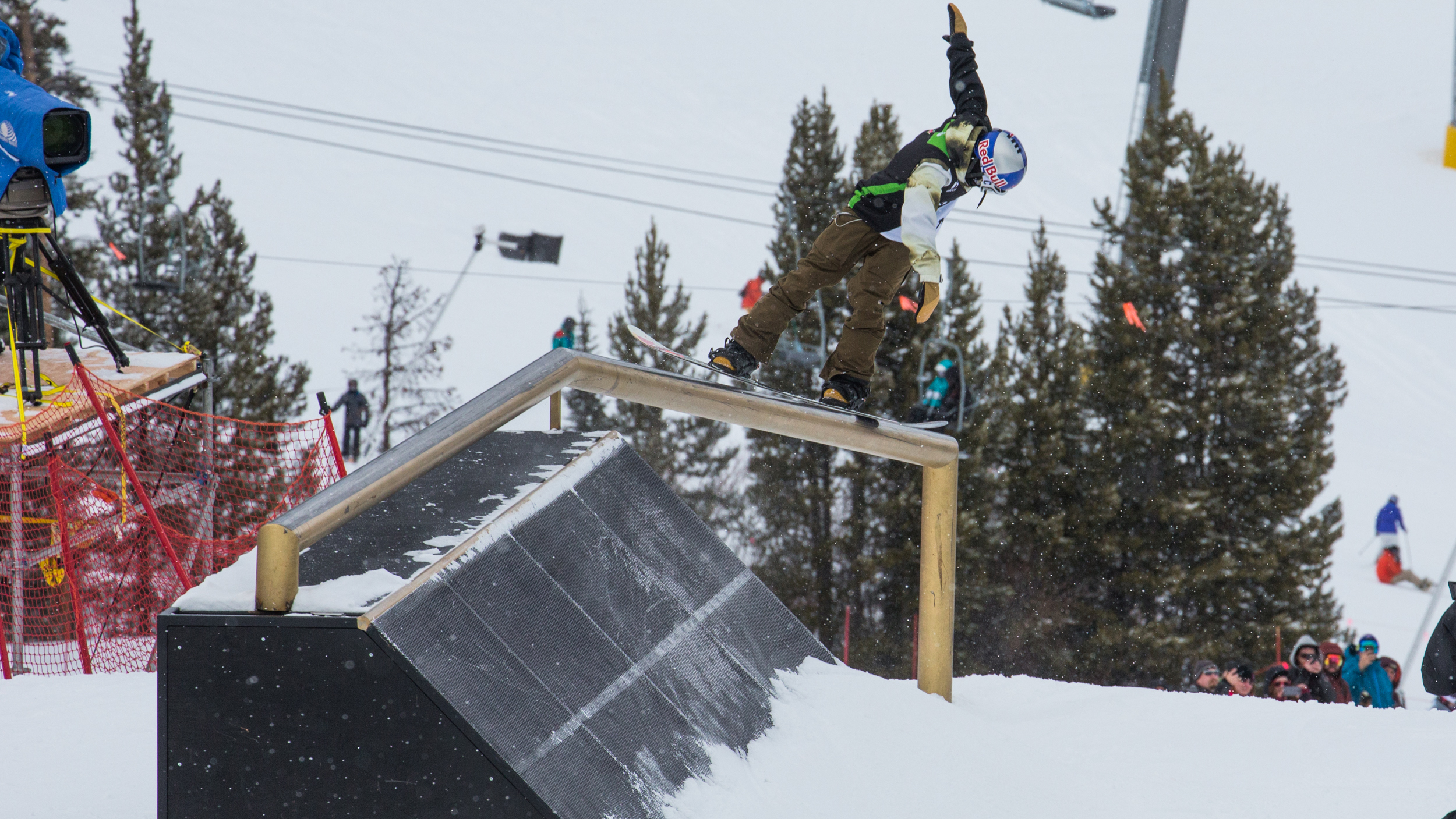 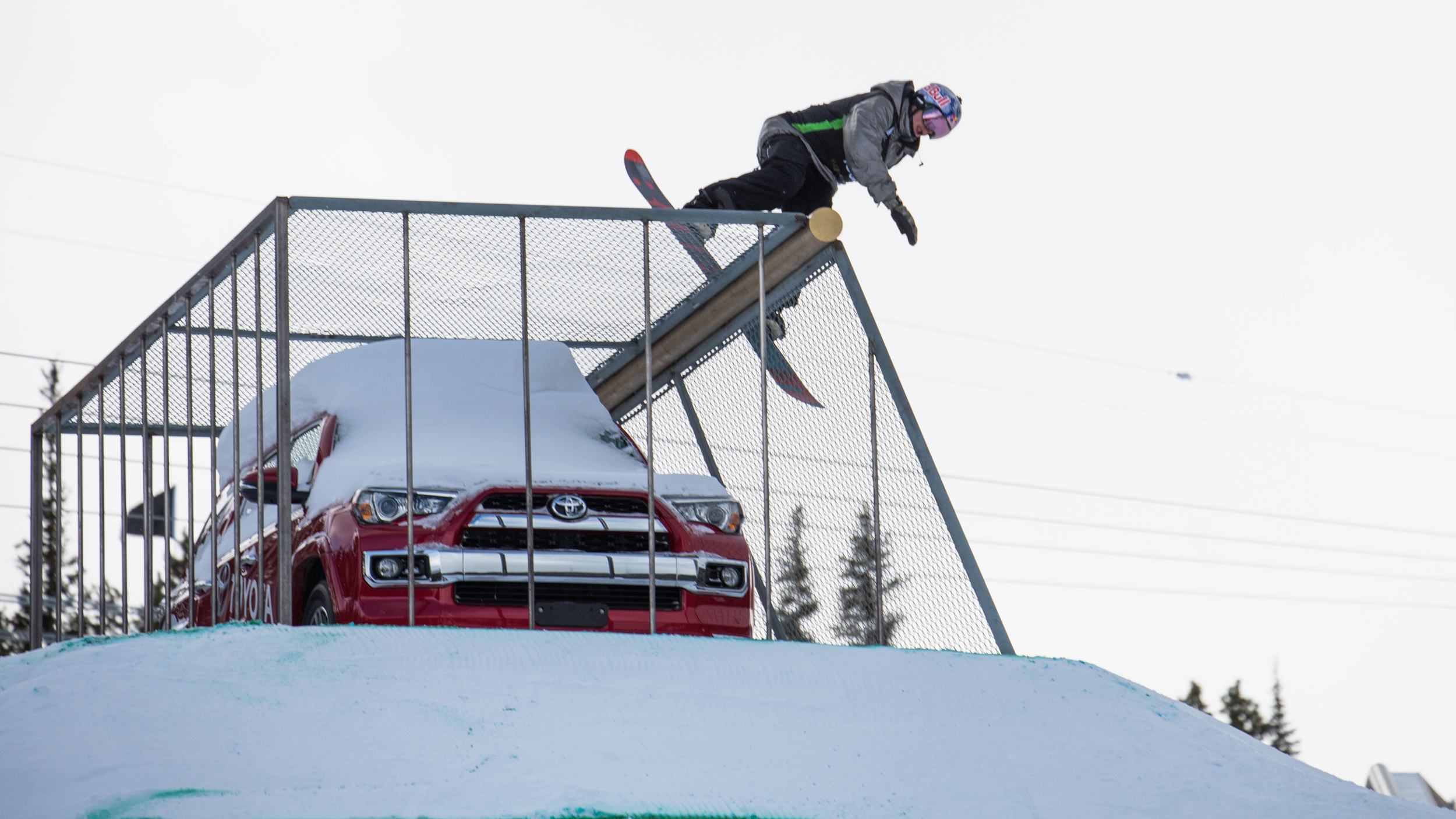 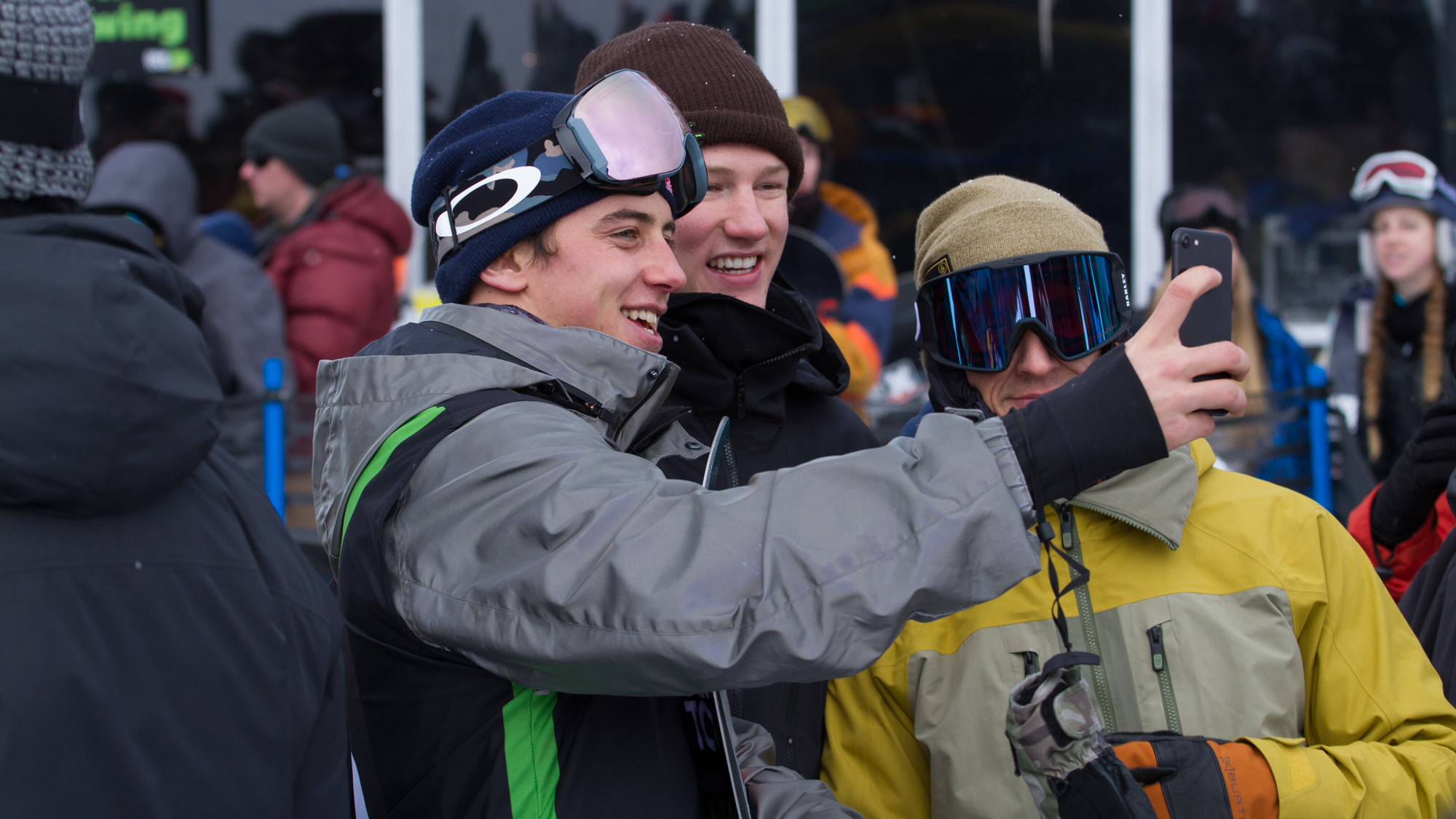 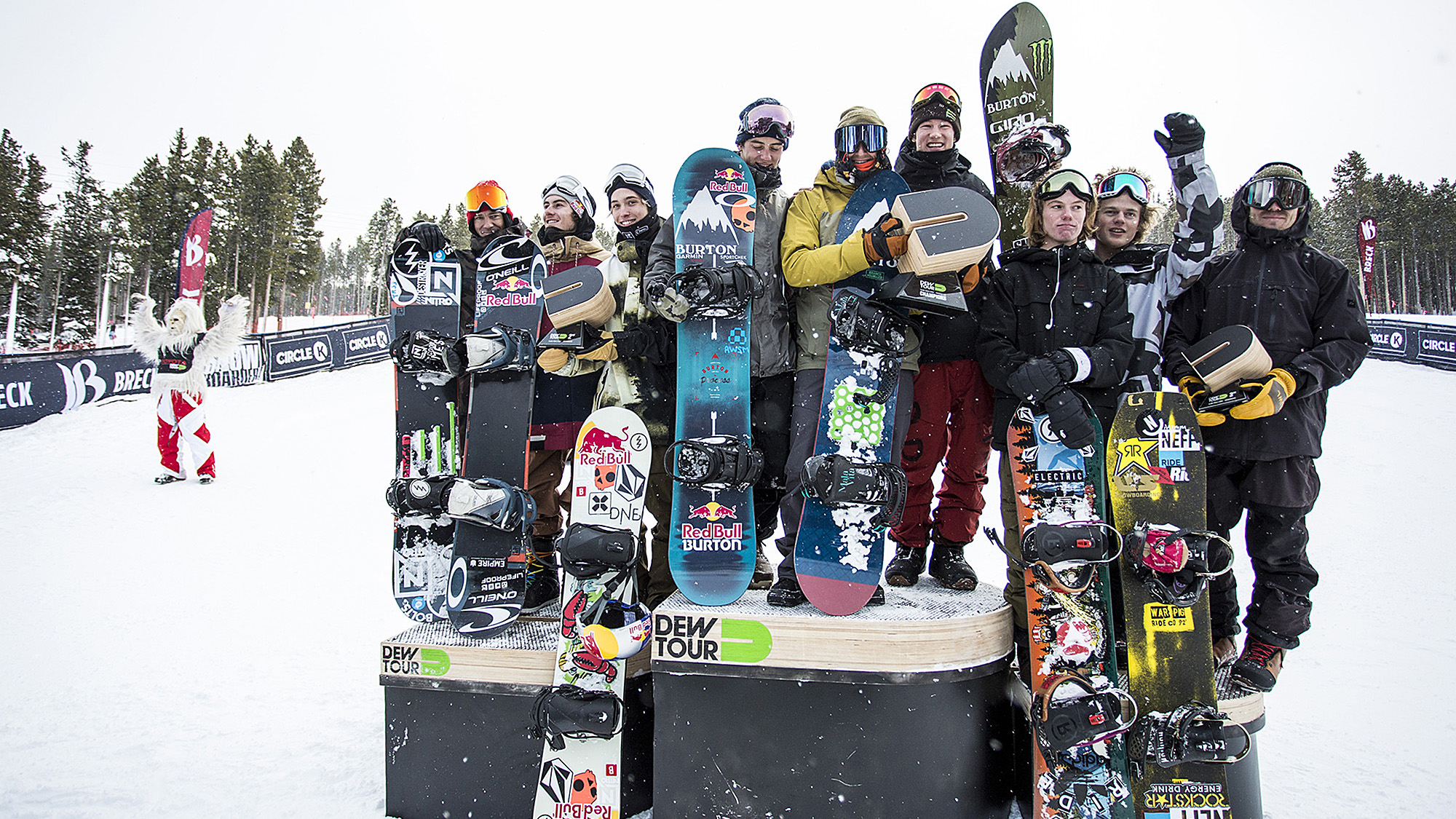 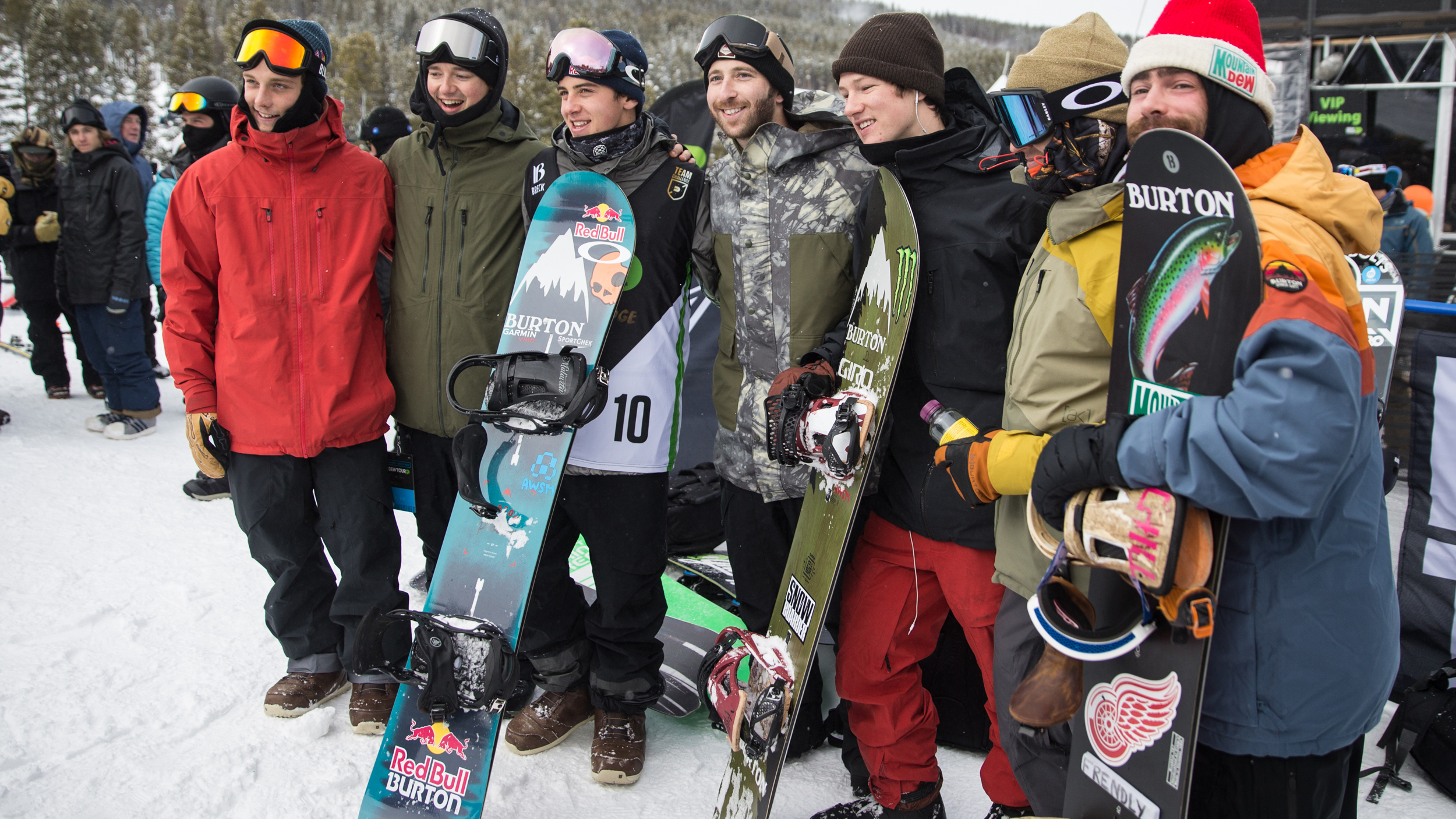 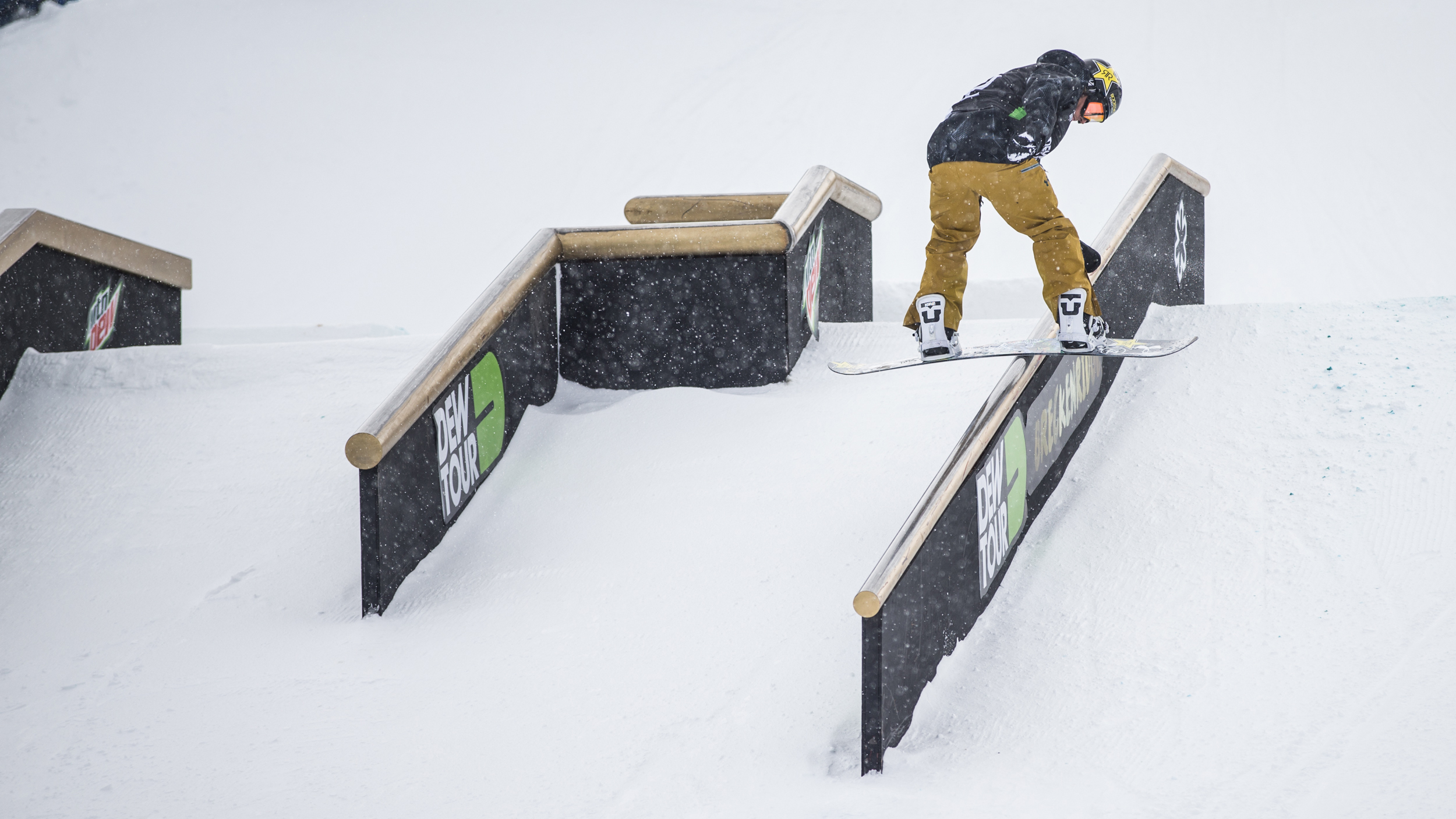 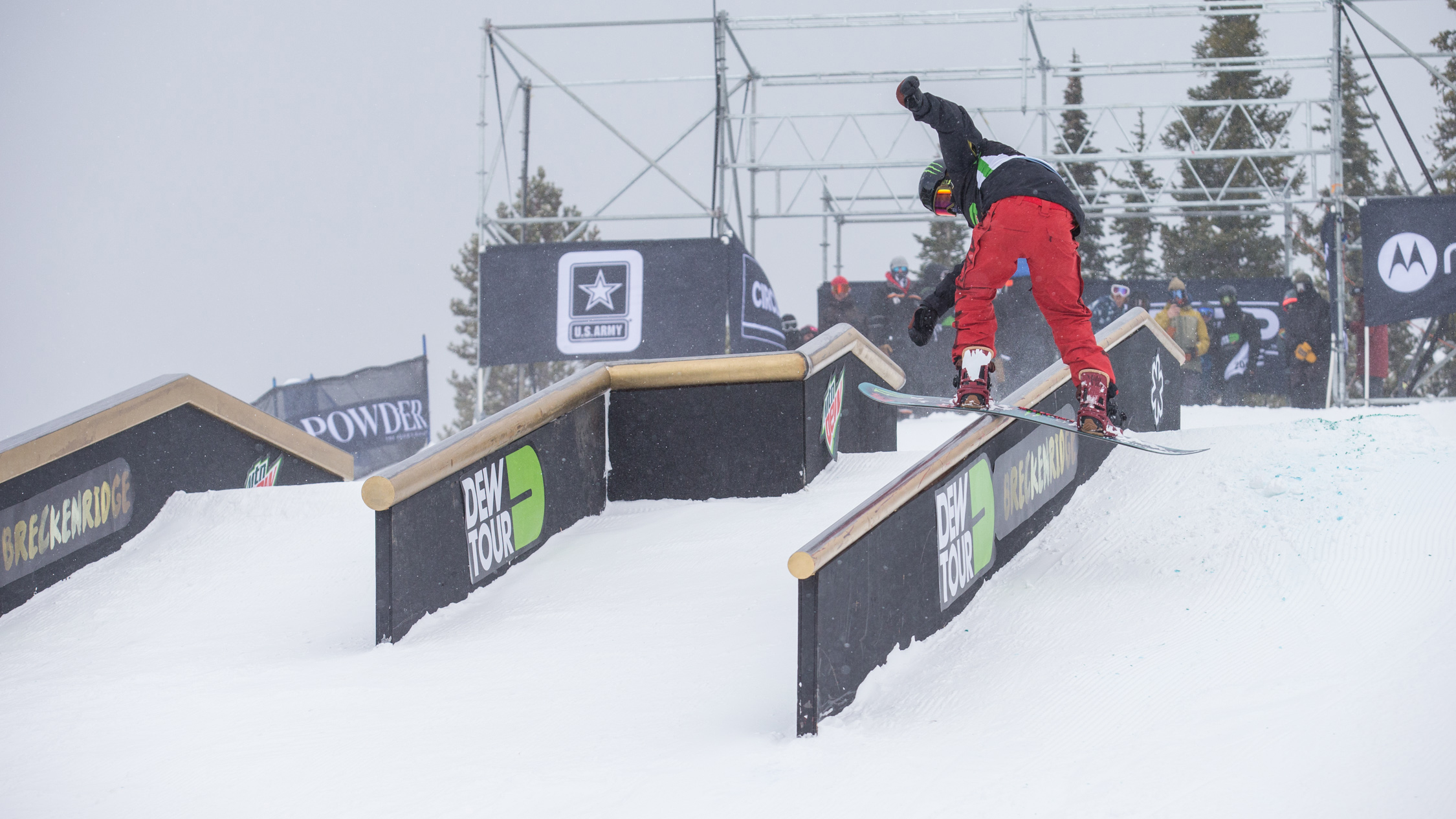 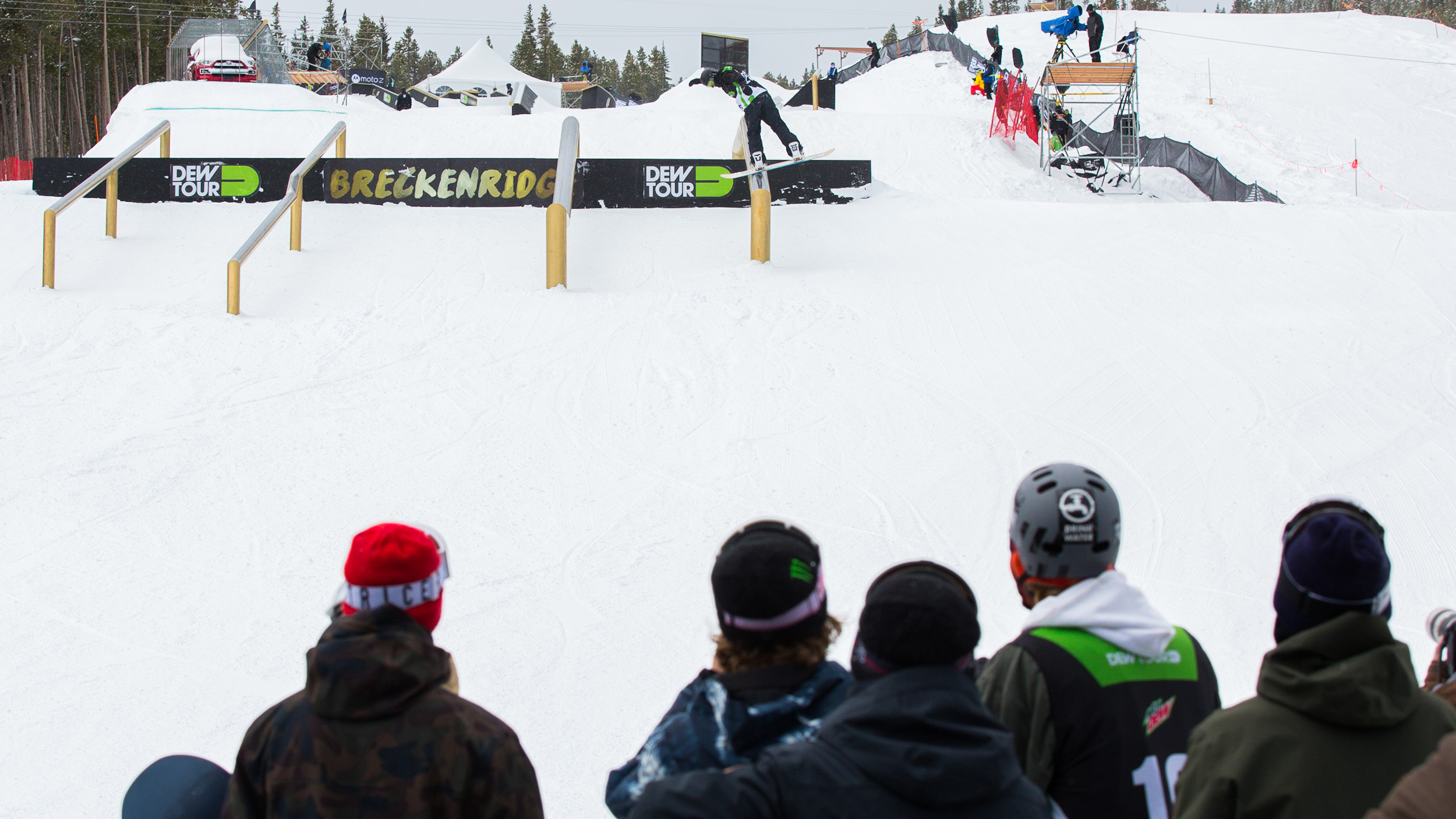 Six snowboard brands assembled at Dew Tour Breckenridge with a roster of riders to take on the first-ever Team Challenge that combines multiple disciplines to declare one overall champion team.

In similar fashion to this year’s Slopestyle Pro Challenge, teams will take on the jib section for three complete separate from the jump where they will be allotted four jumps with the best two tricks spun in different directions making up that score. However, for the Team Challenge each brand must assign a different rider to each section in addition to selecting a Team Captain from their roster to pump up the riders and talk strategy

Competing in the inaugural Team Challenge were Nitro, Ride, Burton, Salomon, Lib Tech and DC making for not only an all-star lineup of athletes on course but also legends holding it down as Team Captains in the start areas.

First up were the jib experts getting technical on the rails. Making up the field of jibbers was an even mix of contest veterans and street sharks. Snowboarders such as Ted Borland (Lib Tech), Jesse Paul (Salomon), and Jordan Morse (DC) are not your typical riders contest killers, and that is exactly what Dew Tour was hoping to see.

“I think this is really fun,” began Borland. “It is really fun to ride a sick park like this, especially with all of the insane snowboarders that do these kind of contest. That was my favorite part, riding a sick setup and watching a lot of really good snowboarders.”

Beyond the course and the athletes, riding in an event in the name of the sponsors that support them made for an added impact once scores drop. For Borland, Lib Tech has been his favorite brand far before they ever began to sponsor him, so to see the brand’s name on the scoreboard in relation to his riding was nothing short of an honor.

“This has always been my team. I don’t go to big events and cheer on another Norwegian guy just because I’m from Norway. I’m cheering for the guys on my team,” explained Burton Team Captian and all around snowboard legend, Terje Haakonsen. “I’m a company rider. I didn’t get built up by Norway, I got built up by Oakley, Burton and Volcom—that is my support.”

Haakonsen is well-recognized throughout the industry as true ambassador to the sport. Haakonsen treated the athletes and fans when he hopped onto his snow skate and made his way down the jib course where he continued to cheer and talk strategy with his team.

“Keep that speed up,” advised Haakonsen to team rider Darcy Sharpe. The two also discussed approach to hitting the rails with Haakonsen encouraging Sharpe to slide each rail for as long as he could and to add a different kind of flare.

Not only was the riding on another level for the Team Challenge, but the riders themselves were from all over the industry from contest killers to video part people.

“It brings out a different type of rider, like Jordan [Morse], Jesse [Paul], and Ted [Borland],” acknowledged Sharpe. “I thought it was super sick seeing their trick selection and just having them at the top makes the vibe way better—you are not just dealing with a bunch of contest jocks (laughs).”

Sharpe’s run secured the top spot for Burton, but the Team Challenge was hardly halfway over.

Following part one of the challenge on the jibs, heavy winds rolled in and blew enough snow around to create temporary whiteout conditions. In response to the ever-changing mountain weather, Dew Tour made the decision to swap out the jump portion of the Team Challenge and send those riders for round two on the rails again.

Essentially repeating the first round with six fresh faces representing the same six brands, the Challenge wrapped up with another jib session in front of swarms of people crowding the final feature.

Coming in with a comfortable lead thanks to his teammate, Mark McMorris was the man to represent Burton in the final session. Doing so in a big way, McMorris mentioned how grateful he was to have the opportunity to represent.

“It feels good to do it for the company that is our biggest sponsor,” said McMorris on seeing Burton on the scoreboard. McMorris expanded to talk about what it means to have Haakonsen here for support saying, “It’s nice to have Uncle T here! I’ve known Terje [Haakonsen] for a long time, and he has always backed me. To perform in front of him when it really mattered was the best.

That run locked in the win. Riding out of the inaugural Dew Tour Snowboard Team Challenge was none other than Burton on top, with Nitro taking second and Ride rounding out the podium in third, respectively.

Needless to say, the energy felt during the award ceremony for the Team Challenge was something entirely new to the Dew Tour experience. With gangs of snowboarders representing the brands that back them and the legends from each team hanging out showing sheer support, the Team Challenge left an impression on everyone involved. As an addition to the competition program, it has become an instant classic.