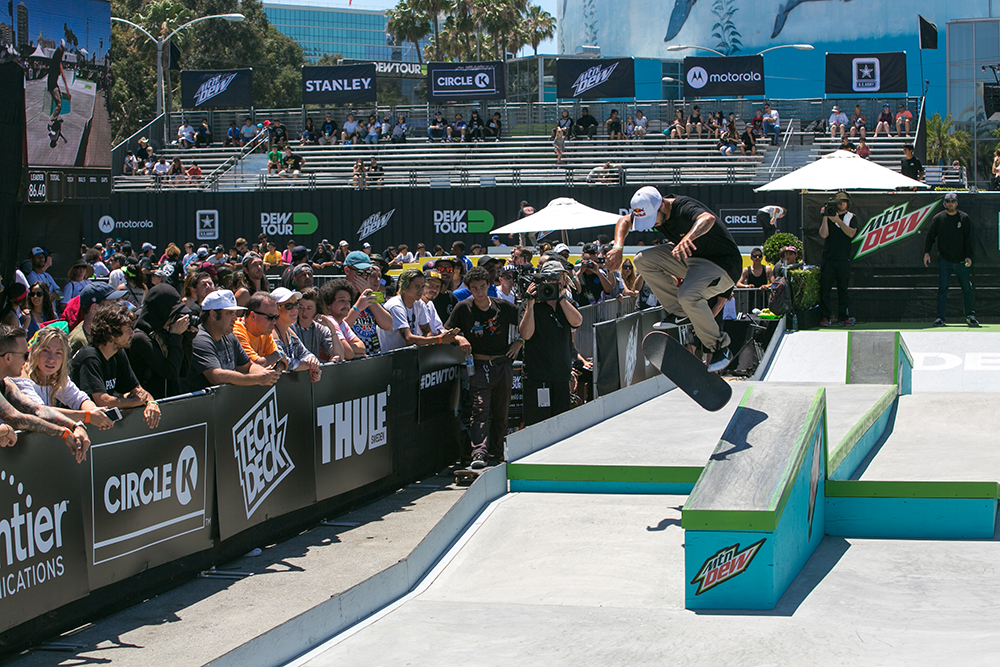 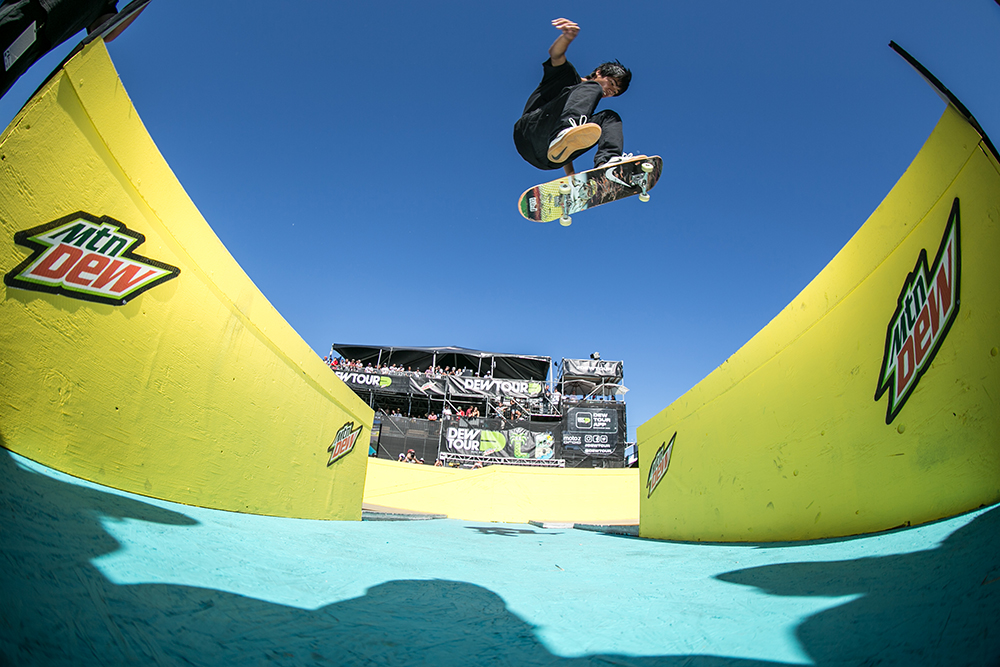 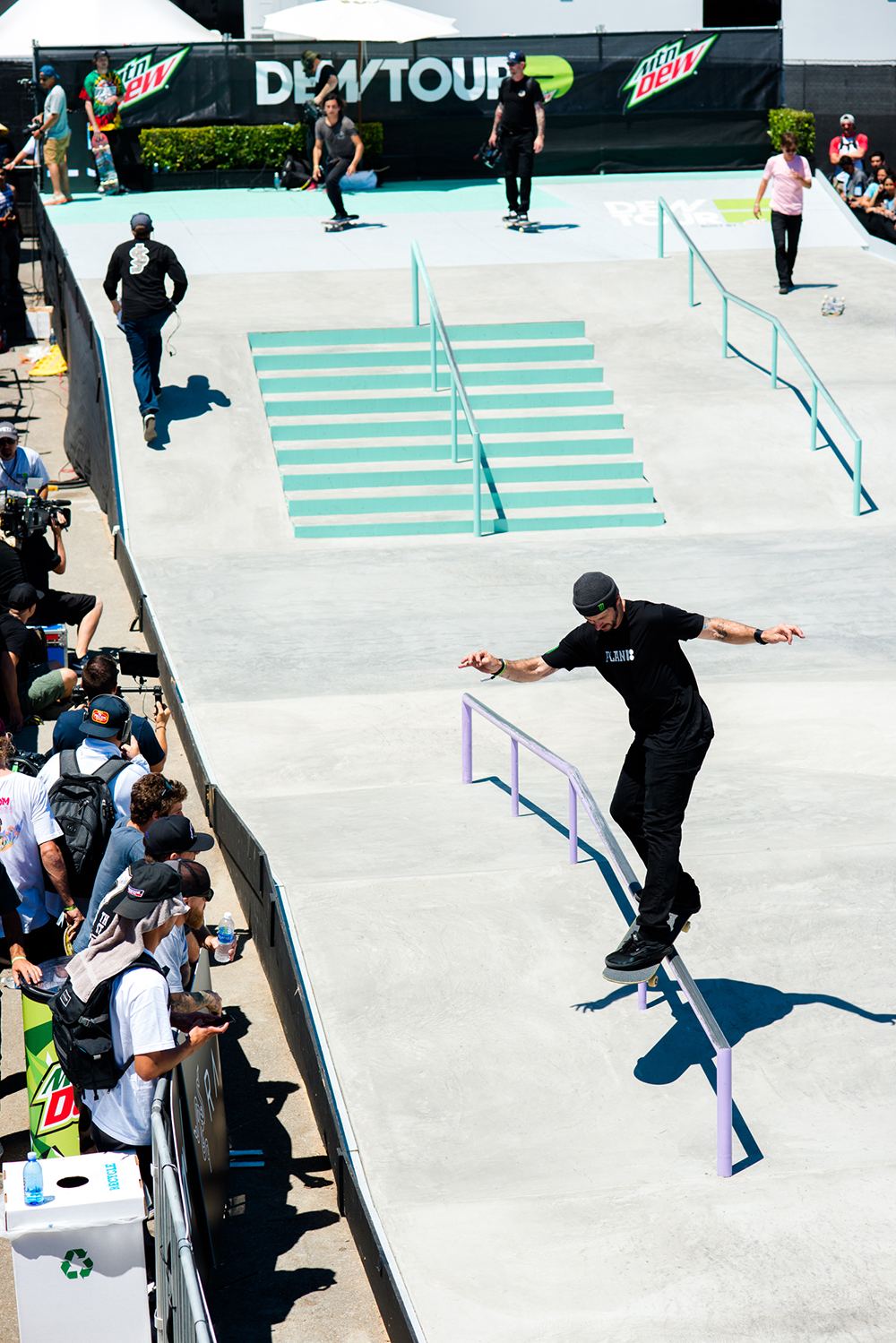 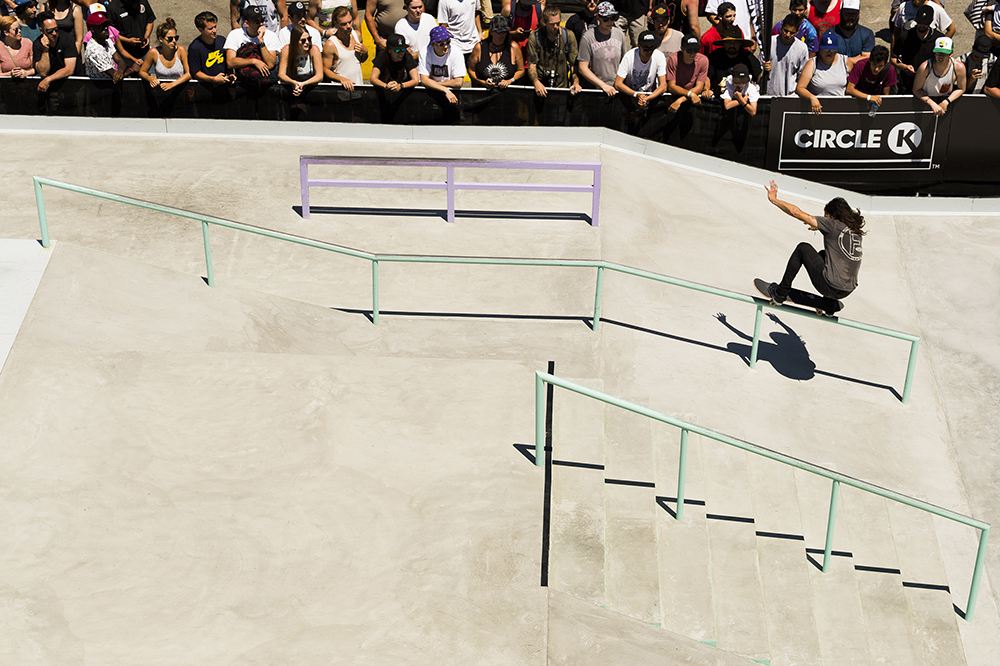 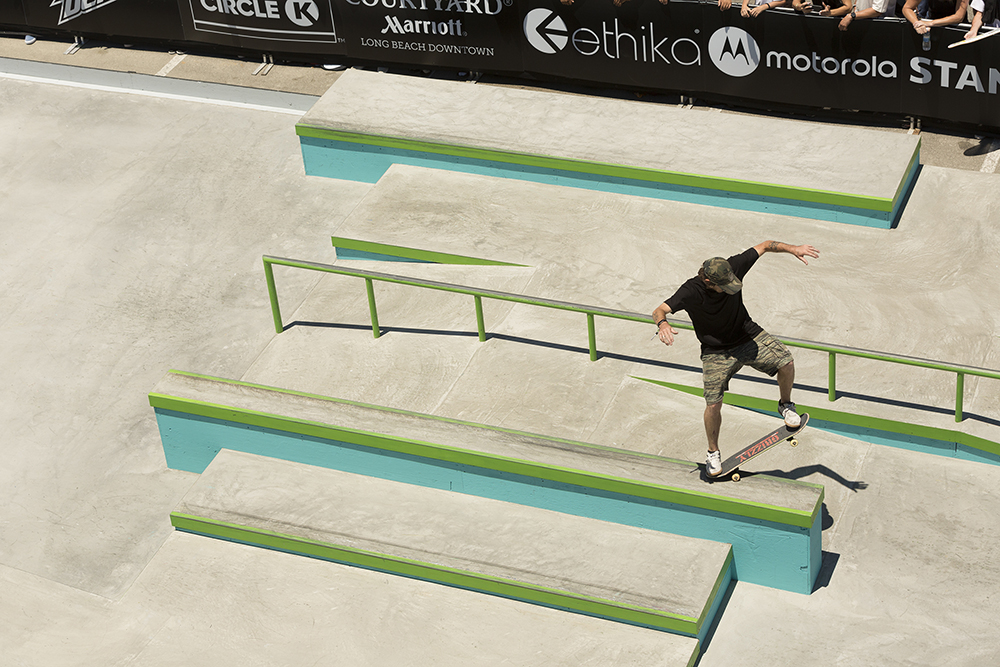 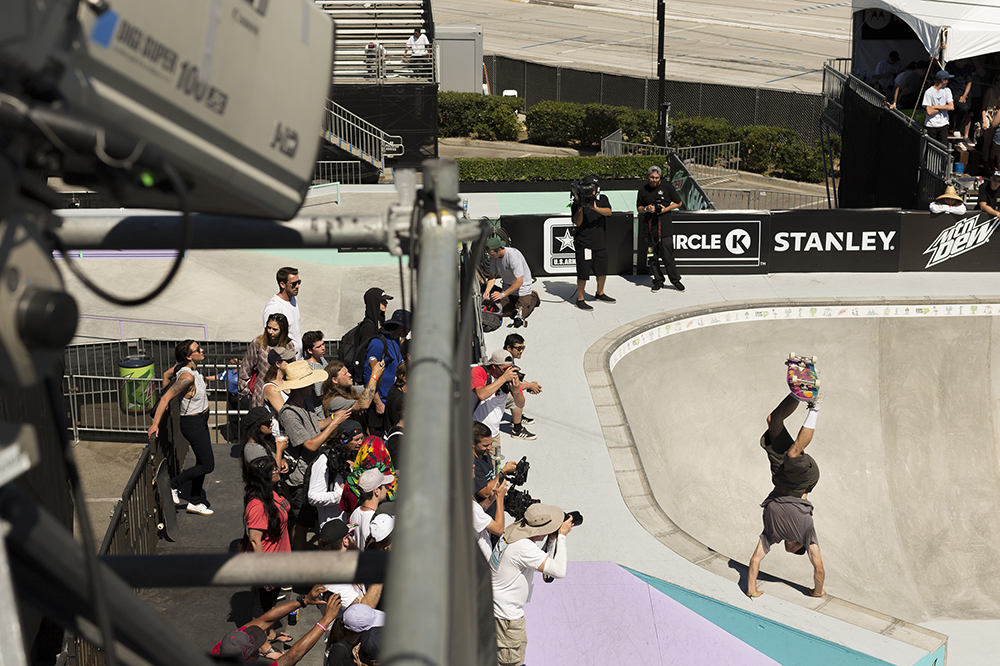 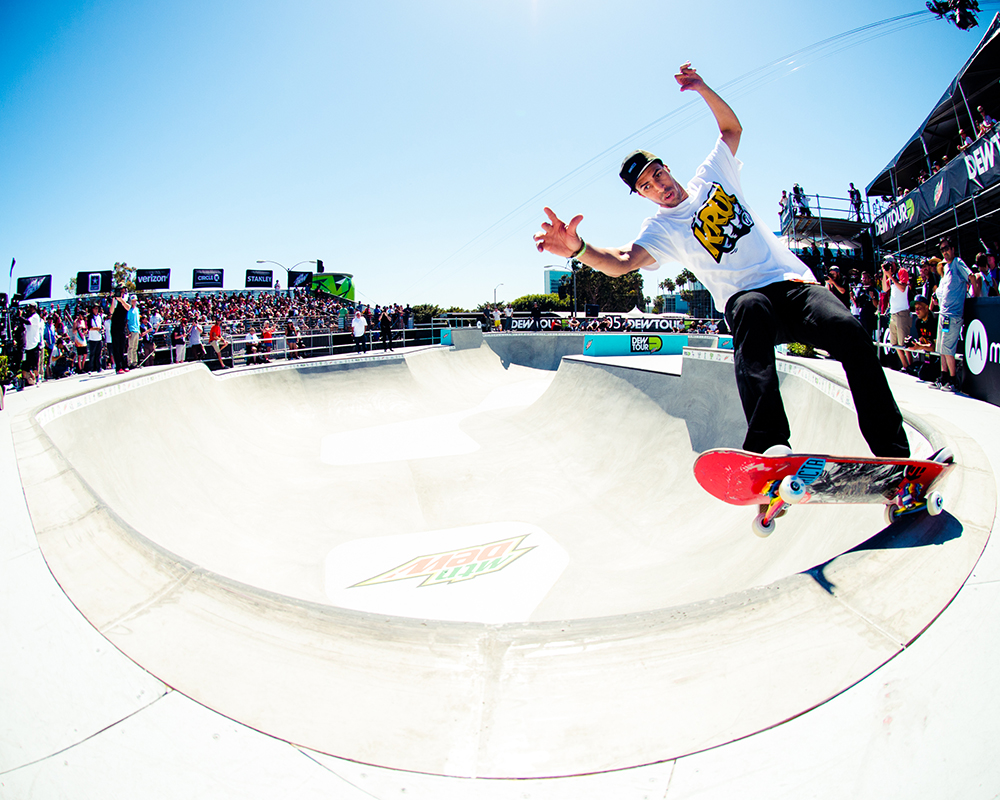 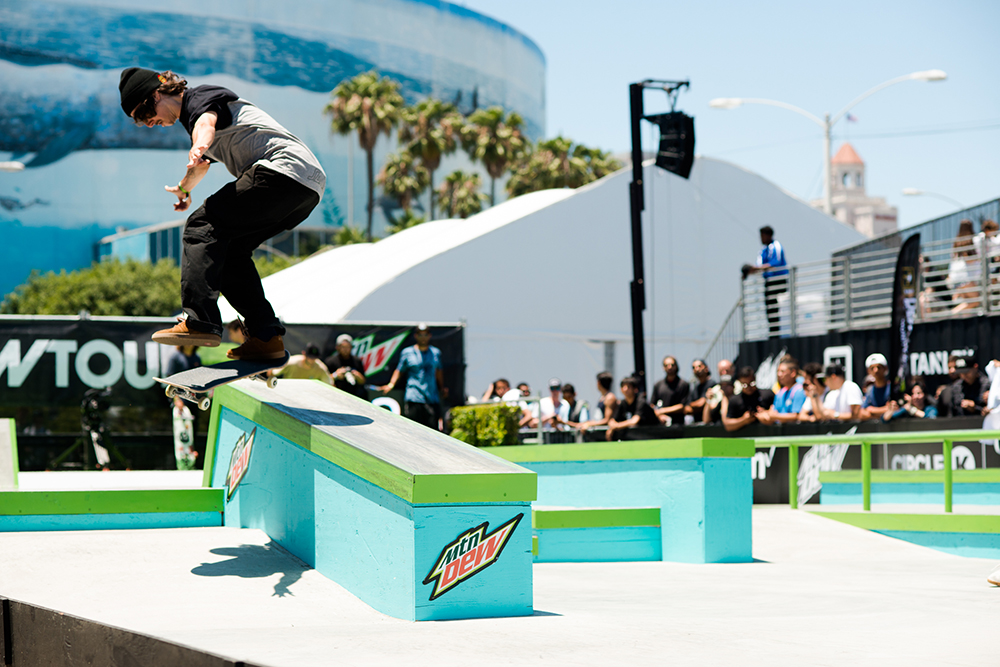 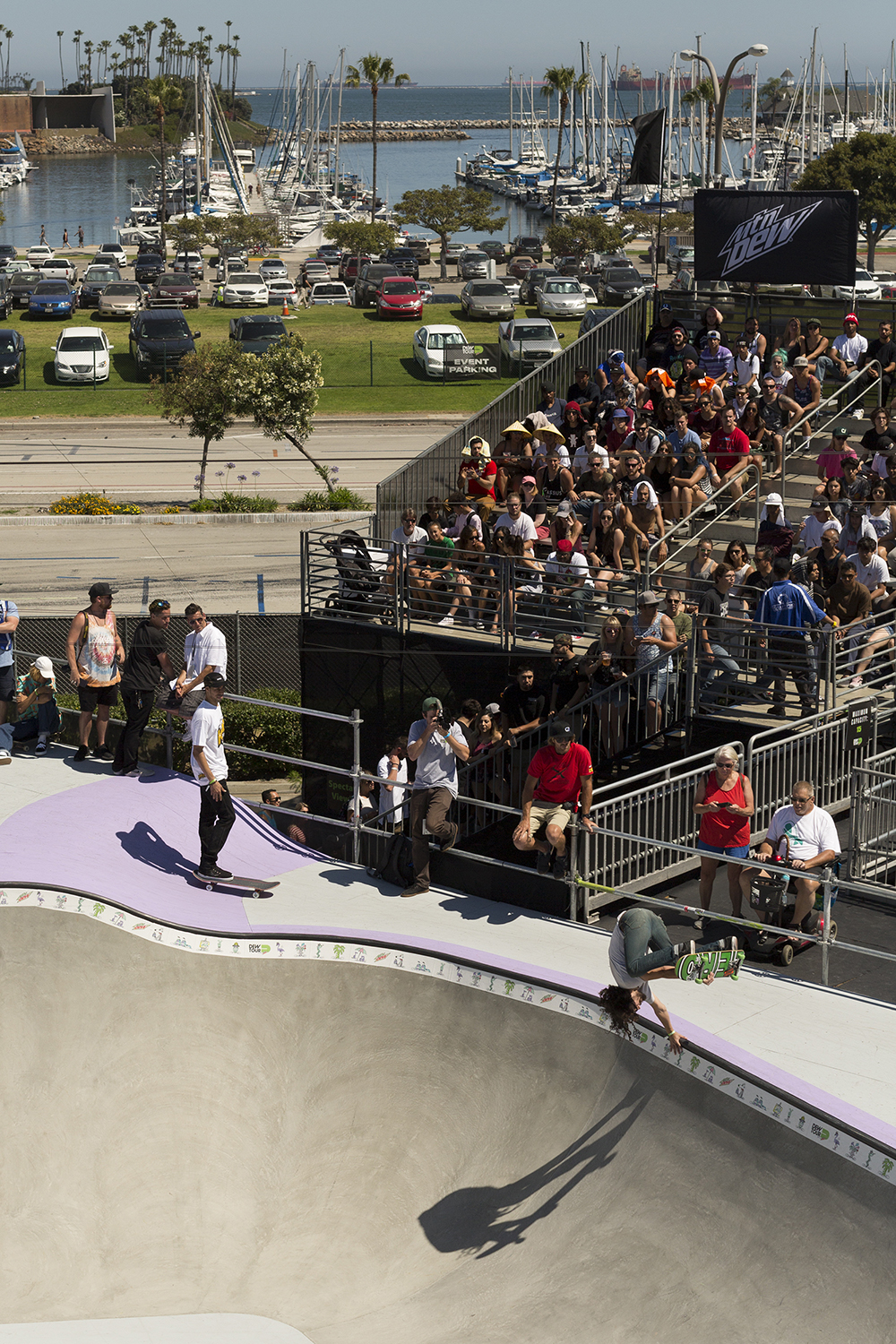 The action doesn’t slow down here at Dew Tour Long Beach 2017—not for a minute. The Team Challenge was the big event of the day, and everyone put on a phenomenal show. Skateboarding is unlike any traditional sport, in that fierce competition tends to take a back seat to friendly encouragement that crosses over team lines. These guys are, for the most part, good friends, and in a way, everyone wins. However, in another, more literal way, Blind wins.

“I’ve always felt that these guys were underdogs,” said Blind Team Manager Bill Weiss, “but at the end of the day, they’re skateboarders… this is just how these guys skate every day.”

The nine teams were split up into three heats of three, which kept the action moving, all while maintaining a comfortable session-like feel for the skaters themselves.

At the end of the tech section, Blind’s TJ Rogers had a solid lead over the rest of the pack. Dave Bachinsky, representing Darkstar. Zero’s Franky Villani skated well, as did Flip’s Matt Berger.

The rail section was second, and not one heat disappointed. Foundation’s Cole Wilson is currently rewriting the rulebook on what’s possible on a handrail, and he brought a slew of grinds, both up and down the rails.

That’s right—he stood tall on a frontside 5-0 up and down the A-frame rail, and a frontside 50-50 up the double kink rail—and shoved out at the top for good measure.

The rest of the rail section was action packed, and the standouts were Blind’s Micky Papa and Darkstar’s Greg Lutzka. Neither one had more than a couple bails, and Papa finished his heat with a solid 90.00—one of the top scores of the day.

The bowl competition is always a crucial aspect of an event like this, it lets a team, and an individual show both their skill and their style. That’s one of the most difficult things to understand about skateboarding—the style of the tricks you do matter just as much as the difficulty. It’s also about putting together a line, finding the right walls, and putting it all together—like a painting.

The Gaps Course was the final stop on the Team Challenge, and the skaters brought the heat. They threw bangers down the stairs, across the water gap, and over the bump to bar. Santa Cruz’s Blake Johnson stood out by ollieing up the water gap, and Flip’s Louie Lopez tweaked a frontside grab up, over, and out, landing in the faraway parking lot.

Blind’s secret weapon Yuto Horigame was the icing on the cake—the cake that was given to Blind, because they won the entire Team Challenge for the second year in a row. Will they make it a three-peat next year? We can’t wait to find out.

There’s still another full day of skating to come, so bring your board on over to the Long Beach Convention Center, and witness the carnage in person at Dew Tour 2017.

“I’ve always felt that these guys were underdogs,” said Blind Team Manager Bill Weiss, “but at the end of the day, they’re skateboarders… this is just how these guys skate every day.”